VIDEO: One Dead After Crash Closes Part of 403 in Mississauga 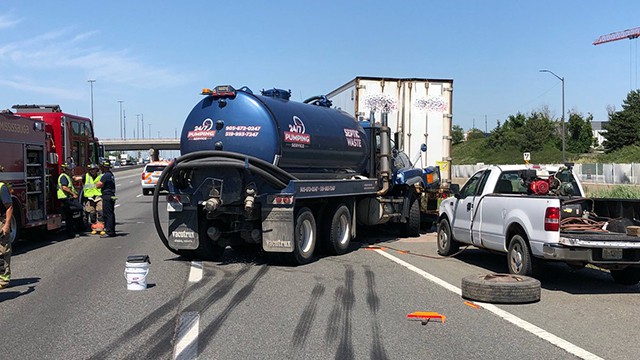 One person has died following a crash on the eastbound 403 in Mississauga.

The collision occurred on the eastbound 403 between Mavis Rd. and Hurontario St.

“I’m on scene here, highway 403 eastbound between Mavis and highway 10,” Schmidt said in a video posted to Twitter.

“We have a two vehicle collision involving a septic truck that went into the back of a parked, stopped or disabled transport truck that was on the right shoulder getting some work done by a tire maintenance company.”

Schmidt said one person was taken hospital with critical injuries and another with serious injuries.

The critically injured victim has since succumbed to his injuries.

“Right now we have all lanes for the 403 eastbound closed,” says Schmidt. “All traffic is being forced off at Mavis Rd.”

The westbound lanes are still open, but traffic is slow due to the visual distraction.