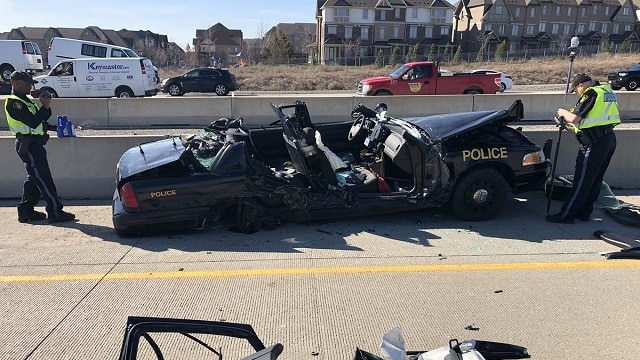 An officer with the Ontario Provincial Police was seriously injured today following a collision that occurred during the investigation of a previous collision in Mississauga.

The OPP’s traffic division reported at 3:17 p.m. that they were on scene for a crash on Highway 407 eastbound after Mavis.

Peel police officers and paramedics attended the scene as well.

While the investigation was ongoing, another vehicle slammed into an OPP vehicle that was stopped on the side of the road, causing severe damage, OPP Sgt. Kerry Schmidt reports.

The officer inside was trapped in his vehicle until he was later extricated by emergency services. He is currently in the hospital with serious injuries.

“This is what I never want to see,” Schmidt says. “The officer involved here is a seasoned, experienced officer — someone who I would consider a friend — and to see something like this is very upsetting for everybody involved.”

Police took the other driver into custody. No charges have been laid at this time.

Highway 407 eastbound at Highway 401 has been shut down for the time being.

Officer hurt after being struck by another vehicle. One person in custody #Hwy407 EB at Mavis Rd. https://t.co/dtZgIyVqZh

Officer hurt after being struck by another vehicle. One person in custody #Hwy407 EB at Mavis Rd. pic.twitter.com/6cYZQkpdqo