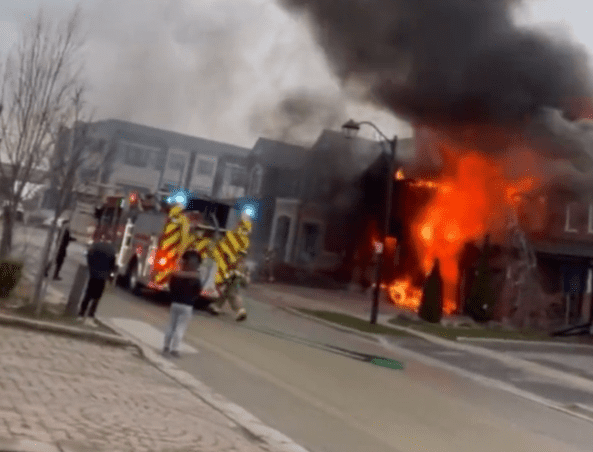 Nearly a dozen fire trucks were called in to battle a townhouse fire in Caledon this week that left residents displaced.

The fire started sometime before 3:15 p.m. on Wednesday (Dec. 7) at a residence on Stella Cres. in Bolton. The fire spread to adjoining units, damaging at least four homes in the townhouse complex.

Video of the fire sent to Insauga shows a home fully engulfed in flames with large plumes of thick, black smoke.

It took two hours and 11 fire engines to get the blaze under control. And while no injuries were reported, over a dozen residents were displaced by the fire and crews also rescued two cats and one bird from the fire. Caledon Mayor Annette Groves said Caledon Community Services and the Red Cross had been called in to help families impacted by the blaze.

“I can’t imagine how devastating it is to be displaced from your home, especially so close to the holidays. I want the families to know Caledon is here for you,” Groves told the community in a statement on Twitter.

The Ontario Fire Marshal has been called in to investigate the incident.