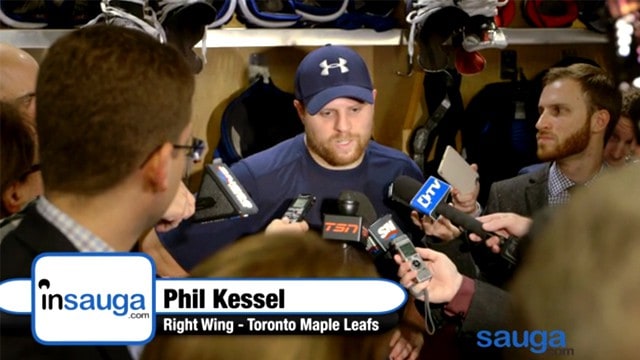 We were ushered in through an unmarked entrance at the Air Canada Centre manned by security before reaching the platinum level where organizers had our media passes waiting for us. We were told to go to the media room where myriad reporters congregate before every game and that room boasted the who’s who in the hockey analytics world.

I saw everyone from TV personalities to writers working for the country’s biggest newspapers. All of these seasoned media veterans knew each other, and I listened in rapt silence as these experts casually hobnobbed with one another, laughing and telling stories about their weekend hockey exploits.

For those who don’t know, the production value of a Leaf game has improved exponentially since I saw Crosby lose to Toronto’s beloved team in his sophomore year. The intro that’s projected onto the ice is movie-like and flawless; making it seem like the ice isn’t there at all.  The experience is more engaging and interactive than ever before. When you see it, you know you’re part of something polished, exciting and special.

One thing the average ticket holder doesn’t see is the media chasing the Leafs everywhere they go and that is absolutely no different after a game. Toronto boasts the biggest hockey market in the world, so anything a player says becomes a sound bite on the radio, TV or online.  If you look, you will find bloggers, writers, sports analysts, TV personalities and now, if you’re really lucky, me.

Let’s follow Leafs as they get followed by the media after a game: