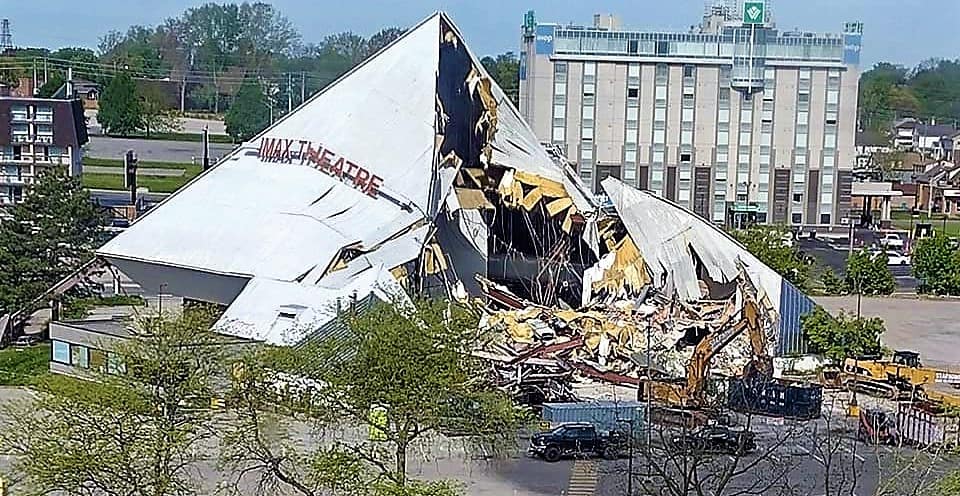 The abandoned IMAX Theatre in Niagara Falls finally started coming down last week. All that remains after the long weekend is a pile f rubble. (Photo: Steve Sadusek/Facebook)

Two years after the Pyramid Place entertainment centre was demolished on an adjacent lot, the Niagara Falls IMAX Theatre was torn down by cranes last week, leaving only a pile of rubble after the long weekend.

The two buildings in the entertainment district of the city were being cleared out to make way for a 12-storey, 230-room hotel to be spread over the two sites.

While the theatre’s website says a new location is to be announced soon, the now-demolished theatre was a mainstay in Niagara Falls for over 35 years, being built in the 1980s.

Most posters, while also mourning the building itself, also seemed upset that it was the only one that regularly played the feature “Niagara: Miracles, Myths and Magic” described as a “Walk back to the past. Meet daredevils, the death-defying attempts. In 45 minute, you will witness Niagara Falls’ incredible stories that would take a lifetime experience!”

The theatre claimed the half-hour feature had “introduced millions of people to the exciting history of the Falls through its dedicated film and daredevil exhibition.”

The screen in the IMAX was over six storeys high and came aimed with 12,000 watts of “floor shaking digital surround sound.”

Videographer Cole Morningstar was allowed a walk-through of the abandoned theatre and here’s what he saw.