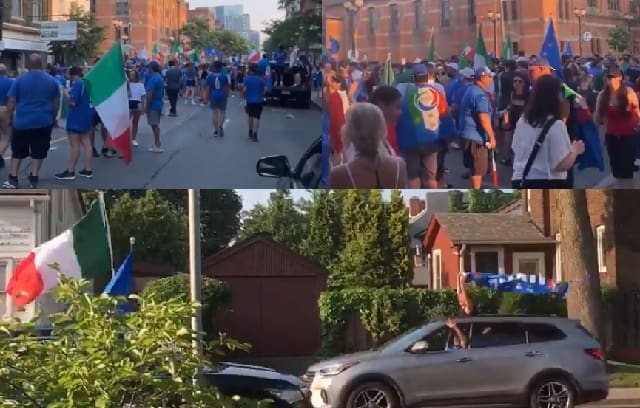 For the first time in a great while, people in Hamilton were excited in public, as fans of Italy’s soccer team poured into the streets to celebrate a major soccer victory.

The city’s downtown was sea of blue jerseys, along with green, red and white flags, to the accompaniment of car horns and the beating of drums on Wednesday. The celebration came after Italy defeated Spain in the semifinals of the European Championship (Euro 2020) at Wembley Stadium in London. Following a 1-1 draw, Italy prevailed 4-2 in the penalty shootout.

Hamilton’s large Italian-Canadian community, and Azzurri fans worldwide, missed out on the experience of rooting for their homeland’s team during the last major internatonal soccer competition. Italy failed to qualify for the 2018 World Cup. The chance to make up for that at Euro 2020 was also deferred a year by the COVID-19 pandemic

Several videos shared to social media convey the euphoria of Italy fans. It is likely the first time that sports fans celebrated in the city’s streets since June 13, 2019, when the Toronto Raptors won their first NBA championship.

So … what’s up in your neighbourhood? #hamont #italia pic.twitter.com/MEw1Zq2FBT

England and Denmark play in the second Euro 2020 semifinal on Wednesday at 3 p.m. (TSN, iheartradio). The championship game is on Sunday.

Of the three remaining nations, Denmark actually has the most recent European championship. The Danes won in 1992. Italy won its lone European title in 1968, reaching the final in 2000 and 2012. England’s next appearance in the final would be its first.