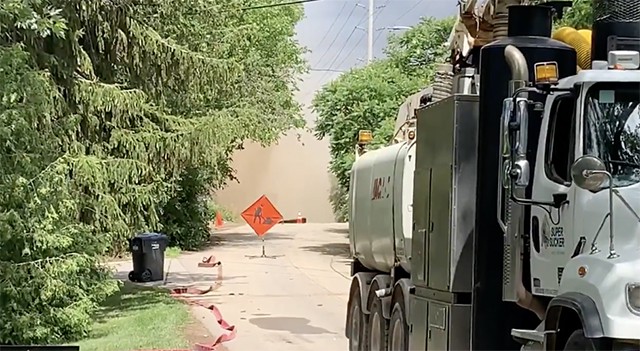 Emergency crews are still responding to a natural gas leak that was reported earlier today (June 21) in Mississauga.

Earlier today, Mississauga Fire and Emergency Services (MFES) took to social media to announce that Blythe Rd. is closed from Doulton Dr. to the dead-end while crews work to repair the leak.

Video from the scene on Blythe Rd pic.twitter.com/4epzM7dcQU

The affected area is located near Mississauga Rd.

Peel police said surrounding homes were evacuated as a precaution.

More homes have been evacuated over the course of the day.

Enbridge is on scene and crews will be working there for several hours fixing the leak. Shortly before 4:00 pm., police said the work could take an additional four to five hours to be completed.

Peel paramedics say that all evacuees are safe and that they remain on scene in a stand by capacity. MiWay buses are on scene for anyone in need of shelter.

Mississauga Fire and Emergency Services says it has set up a command post at Blythe Road and Doulton Drive where residents can obtain help. They also recommend that those people who have been evacuated and require a place to shelter overnight should first contact their homeowner’s insurance company to see whether a hotel stay will be covered. They can then call MFES’s non-emergency line at 905-456-5700 to help secure accommodations.

For those impacted by the evacuation on Blythe Road & require shelter overnight:

27 homes (9 +13) have been evacuated and will be required to stay out of their home overnight.

Photo and video courtesy of MFES