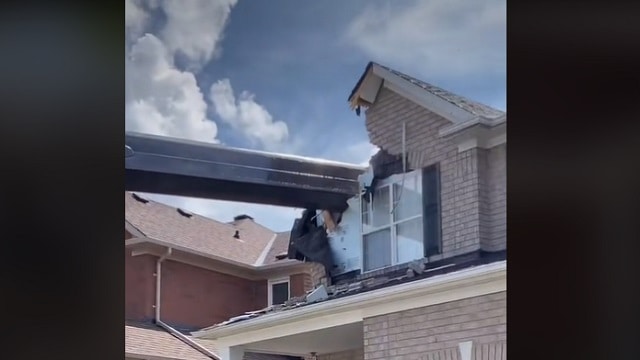 Accidents do happen, although no one expects one quite as big as a crane crashing into their house.

That was the reality for TikTok user datzmylife, who shared photos and video of the recent incident at her home in Richmond Hill.

Posted this as a video now!

She says she was upstairs in her parents’ room filming a video of a new pool being lowered into their yard, when the crane lowering the pool suddenly came crashing down just a couple of rooms away from her.

“I had to run out of there or I was going to be smushed by the crane,” she said in a TikTok post. “I ran for my life.”

Fortunately no injuries were reported, although she and her family have had to relocate temporarily.

Another crane was brought in to lift up the crane that had crashed into the house and caused major damage to its second storey.

That was a turn of events

In her most recent update posted today, datzmylife says they’ve recovered some personal belongings from the house and the house is being tarped up in case of rain.

Photo and videos courtesy of datzmylife on TikTok