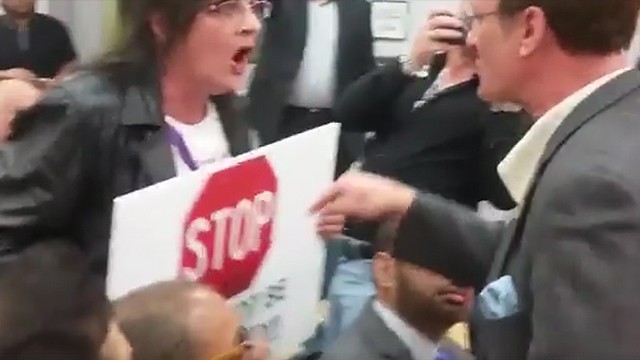 For the past few weeks, conversations about Islam have been exceedingly contentious in Mississauga (and Peel in general) following a rather unremarkable decision by the Peel District School Board to allow Muslim children to say their own prayers during designated prayer times. The passage of anti-religious discrimination motion M-103 has also spurred intense debate.

Now, it appears that a Building Bridges event in Erin Mills, organized by the Voice of Canadians Forum, was hijacked when protesters–including anti-Islam agitator Sandra Solomon–began hollering about sharia law.

The scene ignited while Mississauga-Erin Mills MP Iqra Khalid was speaking. As you might recall, Khalid tabled Motion M-103 in the House of Commons–a motion that calls on the federal government to condemn Islamophobia and combat all forms of systemic racism and religious discrimination.

When Khalid was discussing M-103, a woman interrupted her to begin shouting about free speech, women’s rights in Pakistan, Vimy Ridge and other generally unrelated topics.

“You’ve insulted me as a Canadian and as a soldier’s daughter,” the woman said. “[My father] fought and other soldiers fought at Vimy Ridge, okay? We will not be quelled…This is about you telling Canadians what to think and what to feel and you have no right.”

During this tirade, Delaney confronted the woman and told her “not to dare desecrate what soldiers did with her garbage.”

Delaney’s point was fitting, especially considering the fact that M-103 is not a bill or law and does not criminalize or restrict free speech or criticism of Islam or religion in general.

The motion (which has since been passed), is a call to action that directs Parliament to condemn discrimination and work to quell hate and fear.

But while it’s important to once again stress that the motion is not a law or bill, confusion and fear have continued to dominate the debate, with some critics suggesting passage implies a possible turn to/acceptance of sharia law. But to break it down further, the motion is not just about Islam or the Muslim community. It condemns all forms of religious discrimination.

After the motion was tabled, Khalid had to be offered additional police protection, as her staff at her Mississauga constituency office began receiving threatening messages and phone calls from across Canada.

The motion received support from all major political parties and was formally endorsed by Mississauga City Council.

After the initial disruption, the meeting dissolved into a chaotic cacophony of shrill screeches about murderous imams, Pakistan (and although women’s and human rights in Pakistan are pertinent and important topics, it’s upsetting to see them bandied about casually and irresponsibly to debate a completely unrelated motion that does literally nothing to threaten or detract from women’s rights in Canada), sharia law and more.

While there is a time and place to discuss the impact religious fundamentalism has on women (because it can be profoundly detrimental), these shouting matches about free speech and faux-feminism are counterproductive–especially since they’re frequently carried out by attention-seeking agitators with objectionable political agendas of their own.

The motion–which is symbolic in nature–does not seek to restrict free speech or spread or enforce sharia law. The protesters are fighting a problem that does not exist in Canada, a country with a fairly rigorous immigration system that has acted decisively to punish offenders who have acted against women–sometimes tragically–with lengthy prison sentences.

It’s also important to mention that the slew of protesters who have converged upon this and similar meetings across the GTA are sometimes associated with far-right anti-Islamic groups that are still allowed to gather and agitate (the government hasn’t come to destroy their literature and lock them up, has it?). Now Magazine actually put together an interesting summary of the groups here. One organization that has popped up at recent events in Mississauga is Rise Canada–an organization led by Ron Banerjee, a man who Now reports is a fixture at anti-gay and anti-Islam protests.

So not only is the co-opting of LGBT and feminist advocacy by some far-right anti-Islam groups amusing on its face, it’s meaningless at a time where gay and women’s rights are not being threatened at the state level by a minority population that includes schoolchildren who just want to pray in peace at school on Friday (something they’ve been allowed to do in Peel for well over a decade).

They’re also meaningless when directed at a symbolic motion that calls for a greater understanding of faith-based discrimination.

It’ll be interesting to see how long this keeps up.