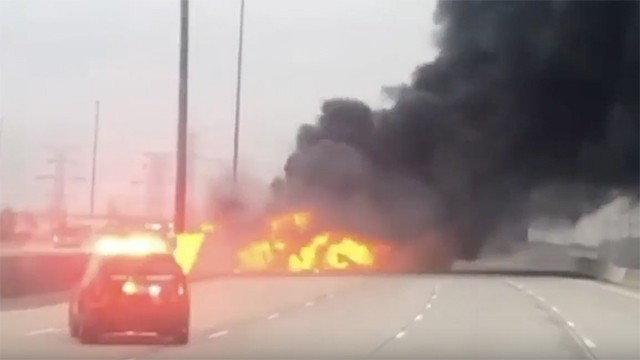 Two men, one from Brampton and another from Mississauga, have died following a horrific crash on the 407.

Police say the 41-year-old Brampton man was operating the fuel truck and the 49-year-old Mississauga man was driving a passenger vehicle.

“Sadly, two lives were claimed in this collision,” OPP Sgt. Kerry Schmidt said in a video posted to Twitter on the evening of the crash.

The crash occurred in Vaughan on the eastbound 407 between Dufferin and Keele on Wednesday, Oct. 31.

A dashcam video of the aftermath of the incident, courtesy of YouTube user Iwan Emawan, can be seen here:

“The fiery crash occurred around 5:00 this afternoon,” said Schmidt.

In a video, Schmidt said it appears that a vehicle crossed over from the westbound lanes into the eastbound ones.

“The collision is massive,” he says.

The crash prompted an enormous fire and a major backup.

The affected portion of the highway was closed for a number of hours following the crash.

Another video of the aftermath, courtesy of the OPP, can be seen here.

Tanker fire with multiple vehicles on #Hwy407 between Dufferin and Keele https://t.co/uwZLhXkcHf