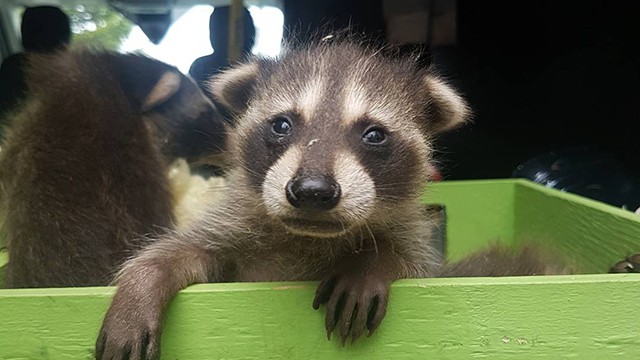 While raccoons have quickly become Toronto’s unofficial mascot, they’re far from confined to Canada’s biggest city and are just as mischievous and present in the ‘burbs.

But while Mississauga residents are quite accustomed to the wild bandits, they might still be surprised to hear that a mama raccoon recently gave birth to a litter of five kits in a Port Credit home in February.

According to Skedaddle Humane Wildlife Control, February births are almost unheard of.

“We’ve been around for 30 years and we have over 70 service trucks on the roads and we go to over 150 homes [in Canada and the U.S.] a day and this is the earliest we’ve found baby raccoons,” says Bill Dowd, president and CEO of Skedaddle. “It’s very unique, if you look at the terrible weather we’ve had.”

You can see a video of the kits, courtesy of Skedaddle, here:

Skedaddle found the kits in a house in the Lakeshore Rd. and Hurontario St. area.

Dowd says that his company doesn’t typically see babies being born until mid-March.

“We’re hoping it’s going to be a very busy spring,” says Dowd. “Homeowners should, if they’re hearing noises, act and call professional companies right away. It’ll be less damaging to their property and it’ll be easier to get them out.”

Dowd, whose company specializes in the humane removal of wildlife from homes, says that while Toronto’s raccoons get a lot of attention, the creatures are just as common in big urban centres across North America.

“Every city in North America has problems with raccoons. People say Toronto is the raccoon capital of Canada, but we deal with just as many in Hamilton and Ottawa.”

As for why this Mississauga-born litter arrived so early, Dowd says some of the warmer days we’ve experienced might have prompted the mother to mate earlier than usual.

“The gestation period for raccoons is 63 days. If we go back, it was probably a mild day and she might have gone into heat earlier,” he says.

As for how the new family made its way into the home, Dowd says the raccoons came in through a vent and were found in the basement of the home, living in the ceiling.

“They’re quite opportunistic, urban wildlife. If they can find warmth or security, they’ll get in, so proper screening on vents is so important for a homeowner,” he says.

“Typically, when raccoons get into a home or under a deck or into a shed, they’ve been in there a few months. People will then hear the noises or see them and then act. It’s rare that the space is pristine once the animals are found. Usually the wiring is chewed and there’s urine and feces, etc.”

Dowd says that raccoons are highly intelligent and that their babies mature slowly, adding that they don’t leave den until about three months.

As for how Skedaddle removes raccoons from homes, Dowd says workers who find a mother with babies will gently persuade her to let them get the baby or babies. Once workers are able to persuade the mother to leave the home, they place the babies in a heated “reunion box” that the mother can easily access when she returns to the area.

“When she comes, she takes the babies one by one to a new site. She’ll usually have seven to 10 den sites and she’ll take them to that alternate site.”

Dowd also says his company is seeing bigger litters than before.

“Thirty years ago, we were seeing litter sizes of two or three, but over time, the animals are flourishing. They’re healthier and having larger litter sizes. We’re seeing more babies.”

So, how can you prevent raccoons or other animals from setting up shop in your home?

“Proper maintenance is important. Be diligent. Your roof is important and if there are vents that aren’t screened or chimneys [that are accessible] or missing shingles or gaps, if they can get their claws in and expand that one inch opening to 12 or 15 inches, they’ll do it,” says Dowd.

Dowd’s team doesn’t just work to remove and reunite the babies with their mother–they also animal-proof the house.

“Sometimes we reunite them immediately, other times it can be eight hours on a job site. We’ll animal proof the structure so they can’t get back in.”

As for the Mississauga family, Dowd says his team noticed that the reunion box was empty when they went to check on it, which suggests that mama raccoon successfully moved the infants to another den.

“We’re the industry leaders and the first to introduce this method,” he says. “People used to trap and relocate animals, sometimes trapping an animal in Mississauga and releasing it somewhere in Burlington, and 70 per cent of relocated animals die. We found a more viable solution by keeping them in their neighbourhood and sealing the homes. The secret is to make your house animal proof. If you’re animal-proofed, animals won’t get in.”

As for the unusual February birth, Dowd says climate change might have been a factor–and might contribute to more early births going forward.

“In some cases it’s weather-dependent, but with climate change, I would suspect that yes, we’ll start seeing more and more baby animals in colder months.”

As for whether the earlier births will lead to more fatalities, Dowd says he’s optimistic that the crafty critters will be able to find warm spots for their growing families.

“Raccoons live in attics or chimneys, so they’re warm. As long as the animals are finding warmth, the babies will survive. Our heated reunion box goes a long way because when she’s taking all the babies, the babies are warm and protected from the elements. It’s like a little incubator for them. Sometimes they’ll stay in the box and we’ll leave them alone for a few days. Sometimes these animals never cease to amaze us.”