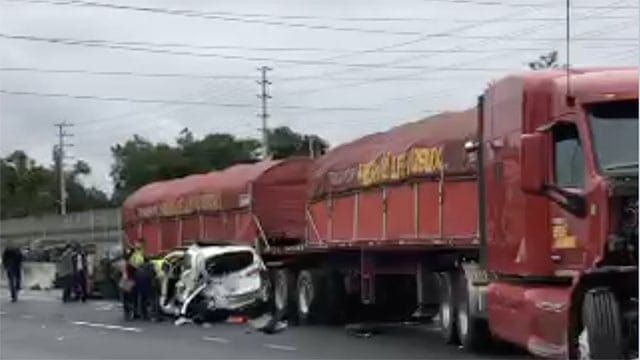 A 12-year-old boy has been airlifted to Sick Kids with a critical injury following a multi-vehicle crash on the QEW in Mississauga.

According to the OPP, the crash occurred on the westbound QEW near Hurontario earlier this morning. The westbound and eastbound lanes were closed in the Cawthra and Hurontario areas, but the eastbound side has since re-opened.

The westbound lanes have been closed at Cawthra and will remain closed for some time while police investigate.

Ornge confirmed that a helicopter was dispatched to airlift a 12-year-old to Sick Kids Hospital in Toronto. He was transported with critical injuries, and there is no update on his current condition at this time.

OPP Sgt. Kerry Schmidt says six other people–including two children under 12–have been transported to hospital with non-life threatening injuries.

You can see a video of the aftermath, courtesy of the OPP, below.

If you normally take the westbound QEW, please find an alternate route.