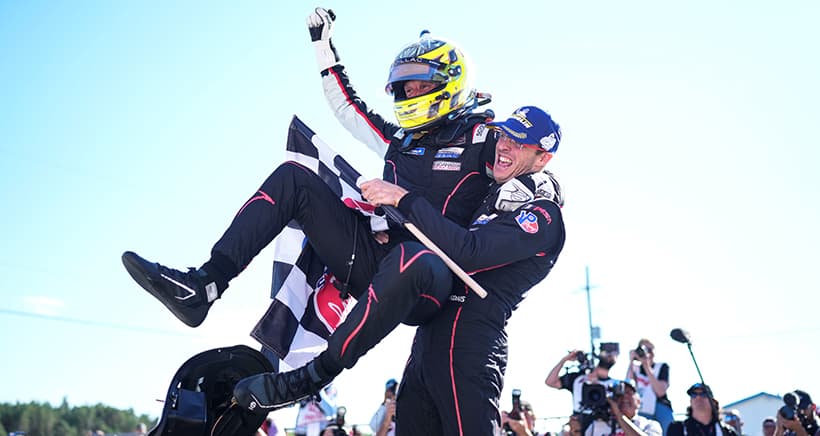 Van der Zande guided the No. 01 Cadillac V Performance Academy Cadillac past Oliver Jarvis in the No. 60 Meyer Shank Racing Acura DPi with 10 minutes remaining in the 2-hour, 40-minute event when Jarvis was inadvertently blocked in Turn 3 by a GT Daytona Pro competitor. Once in front, van der Zande pulled away to win by 3.509 seconds to claim the third victory of the season for the No. 01 Cadillac.

The victory, which was the 10th in IMSA WeatherTech SportsCar Championship competition for Bourdais and the 17th for van der Zande, came as a surprise to both veteran drivers.

Bourdais qualified the No. 01 Cadillac fifth fastest, and the experienced Frenchman admitted that he struggled to come to grips with the fast and tricky CTMP circuit on his first visit. Then both drivers grappled with what they described as an intermittent and unpredictable problem with the Cadillac’s power steering.

“This race wasn’t going to be ours,” said van der Zande, who completed 123 laps of the 11-turn, 2.459-mile road course located 60 miles northeast of Toronto. “We changed the car around completely after the warm-up practice this morning and didn’t know what to expect. The changes worked, but the power steering failed, and that was the toughest part of today.

“I knew I needed traffic to get by, so it was maximum attack, full risk,” he added. “I thought, ‘This is the time to go,’ and it worked.”

Bourdais deferred to van der Zande when he was asked to place the decal signifying a WeatherTech Championship race win onto the victorious Cadillac after the race.

“That was all him,” Bourdais remarked. “With the massive power steering issues, I was barely hanging on and I have no idea how he put that thing up there to fight those guys. He obviously reads traffic super-well, and when he gets all wound up with emotions, he uses that anger in a positive way. He really made it work today, and it was very impressive.”

Blomqvist and Jarvis finished second for the fifth consecutive IMSA race, a streak dating to the event at WeatherTech Raceway Laguna Seca in mid-May. Consolation came in the form of regaining the WeatherTech Championship DPi points lead over the No. 10 Konica Minolta Racing Acura shared by Filipe Albuquerque and Ricky Taylor, which finished sixth at CTMP.

The No 60 Acura duo now lead the No. 10 pairing by 56 points after arriving in Canada trailing by 17. Bourdais and van der Zande moved up to third in the standings, 148 points off the lead.

Pipo Derani and Olivier Pla completed the podium by finishing third in the No. 31 Whelen Engineering Cadillac. 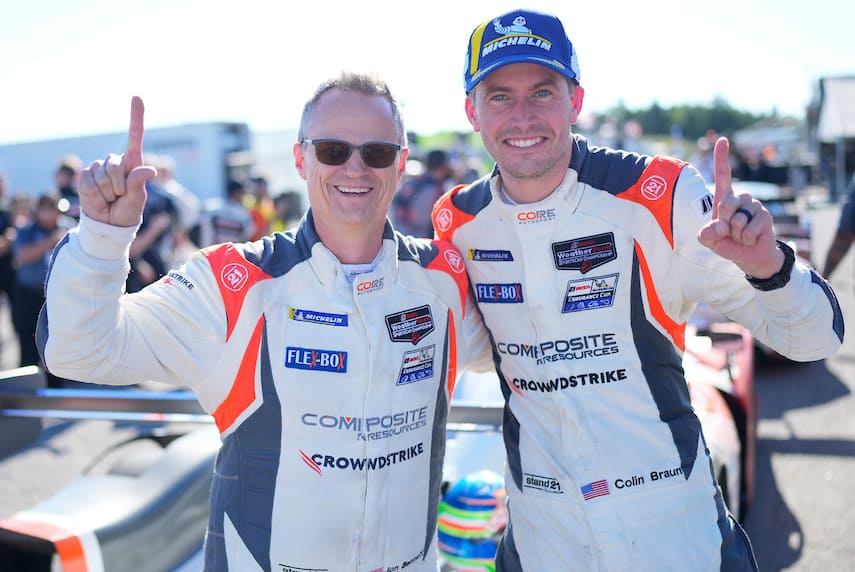 In the Le Mans Prototype 3 Class, Jon Bennett and Colin Braun, who seem unbeatable at Canadian Tire Motorsport Park, took another series win, their fifth at the track.

“I just really enjoy this place,” Braun said. “It’s one of my favorite tracks, and things just kind of seem to flow our way when we come here.”

The No. 36 Andretti Autosport Ligier JS P320 shared by Jarett Andretti and Gabby Chaves was fastest in qualifying, and the No. 74 Riley Motorsports Ligier driven by Gar Robinson and Scott Andrews led for the first 90 minutes of the 160-minute race.

But the Andretti car was delayed in the pits, and the No. 74 suffered a crash, leaving Bennett and Braun an uncontested run to the finish. They won by 2.753 seconds over Andretti and Chaves, with Ari Balogh and Garrett Grist taking third in the No. 30 Jr III Motorsports Ligier.

“Jeff Braun, our race engineer, really set up a fast car, and I ran a clean stint,” said Bennett. “Then Colin was just a rocket.”

The next round of the IMSA WeatherTech SportsCar Championship for prototype classes (DPi, LMP2, LMP3) is the IMSA Sports Car Weekend at Road America, August 4-7. The GT classes are in action at Lime Rock Park July 15-16 for the Northeast Grand Prix.

With files from by John Oreovicz