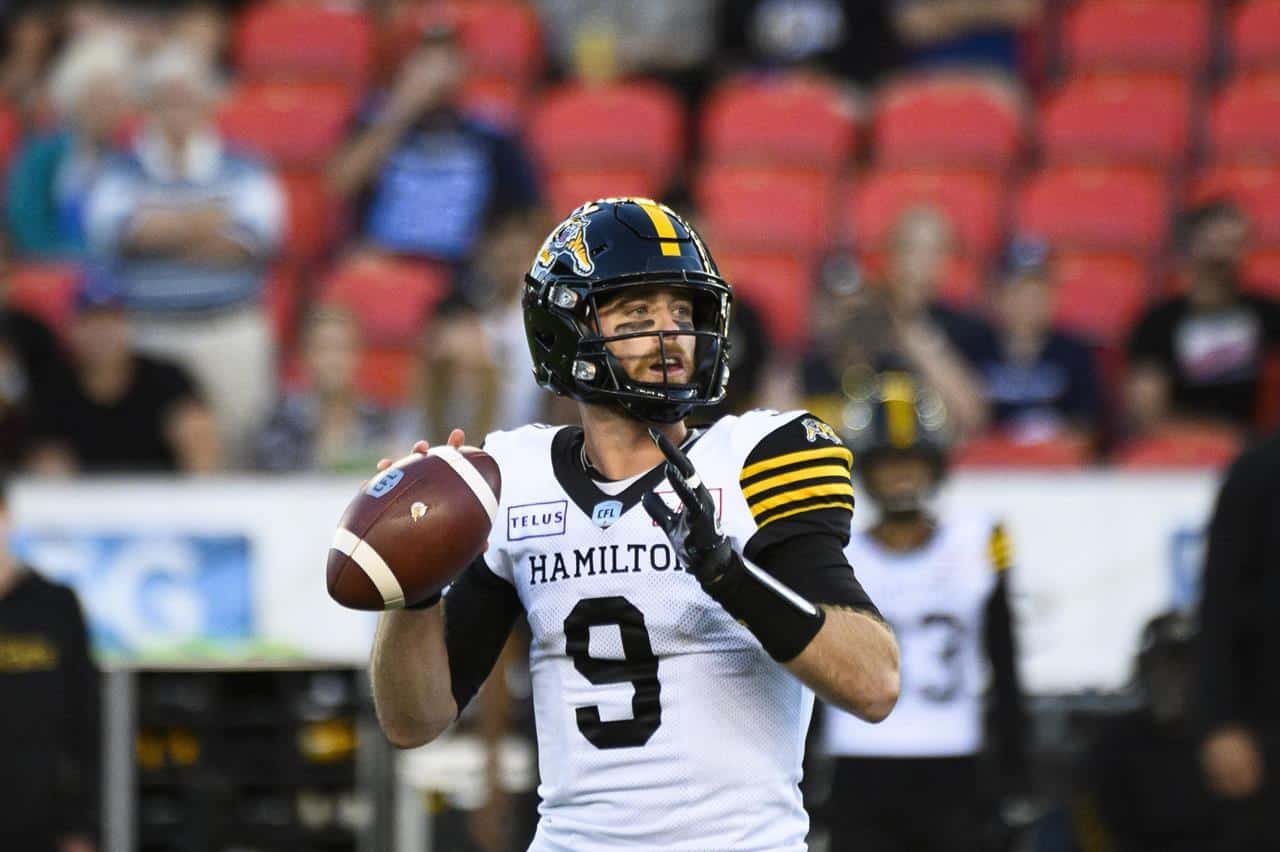 Dane Evans is returning to the Hamilton Tiger-Cats’ lineup.

Head coach Orlondo Steinauer said Thursday that Evans will dress Saturday when Hamilton (3-9) hosts the Winnipeg Blue Bombers (12-1). Evans (right shoulder) hasn’t played in three of the Ticats’ last four games (out for two, listed as the third quarterback in the other).

But Evans has been a full participant in practice this week and is expected to start Saturday’s contest.

“I think (the shoulder) is as healthy as it’s going to be until the off-season,” Evans said. “The last couple of weeks have been really good for it.”

The Ticats haven’t played since their 28-8 Labour Day loss to the Toronto Argonauts on Sept. 5.

Much was expected of Evans this season after Hamilton signed the six-foot-one, 218-pound Texan to a two-year contract extension and allowed veteran Jeremiah Masoli to become a free agent. Evans had made 18 career starts over four seasons with the Ticats, including both Grey Cup losses to Winnipeg in 2019 and ’21.

But the 2022 campaign has been a difficult one for both Evans and the Ticats.

Evans has completed 207-of-309 passes (67 per cent) for 2,473 yards but has more interceptions (CFL-most 13) than touchdowns (10). He has also fumbled seven times, losing six, both league highs, and lost seven-of-nine starts.

QB Dane Evans speaks with the media ahead of tomorrow's game.

Hamilton is averaging just 19.8 offensive points per game (second-last overall) and has scored just 20 offensive TDs (tied for last). The Ticats also lead the league in turnovers made (41), fumbles lost (12) and interceptions (17).

“It (’22 season) has been a lot of learning, a lot of adjusting,” Evans said. “But I think the best term for it would just be adversity.

“It’s been a little bit of a tough one, but I’ve been feeling really good the last couple of weeks. I think my mind is finally in a good spot, and also my body is as healthy as it’s going to be.”

Often this season, Evans has appeared to be pressing on the field and trying to do too much himself. He credits Dr. Carla Edwards, the Ticats psychiatrist, with helping put him in a good place mentally.

“That (trying to do too much) is a very accurate statement,” Evans said. “It’s been probably the toughest season on my mental (health) that I’ve ever had in my life in any season of sport.

“But the last couple of weeks I’ve got with Dr. Carla Edwards, and she’s been great; there’ve been some awesome conversations. At first it was a little uncomfortable; it was one of those things that people don’t like to talk about. But I think that’s a whole other part of my game that I’d lacked tapping into … I don’t know if it’s a coincidence, but my body has been feeling better with my mind feeling better also.”

Steinauer said all he’d like to see from Evans is consistency.

Evans admits he’s his own worst critic. But something he’s also learning to do is give himself credit for the good things he does on the field and not concentrate solely on when things go bad.

“I think that’s something I can get better at, … there has to be a fine balance,” he said.

Life away from the football field has also helped Evans maintain a proper perspective. Earlier this summer, Evans and his wife, Nikki, became first-time parents with their daughter, Ivy.

“Obviously I give it my all up here, and I think everybody knows that but win, lose or draw, going home, I know Nikki and Ivy are going to love me the exact same,” Evans said. “It’s just been amazing watching our baby grow.

“She just rolled over for the first time during the bye week, and I was right there when it happened. That’s just a small step but being able to be there and witness it was just amazing.”

And despite the Ticats’ struggles, they’re still in playoff contention in the East Division. Entering this week’s action, Hamilton is tied for third with Ottawa (3-9), just four points behind second-place Montreal (5-7) with six regular-season games to play.

“What I’m really thankful for is how the team has been handling everything,” Evans said. “I know we’re 3-9 and all of that, but I’ll tell you this much, we’re still getting after it in practice.

“It’s not like guys have thrown it in … I can promise you that’s not happening.”