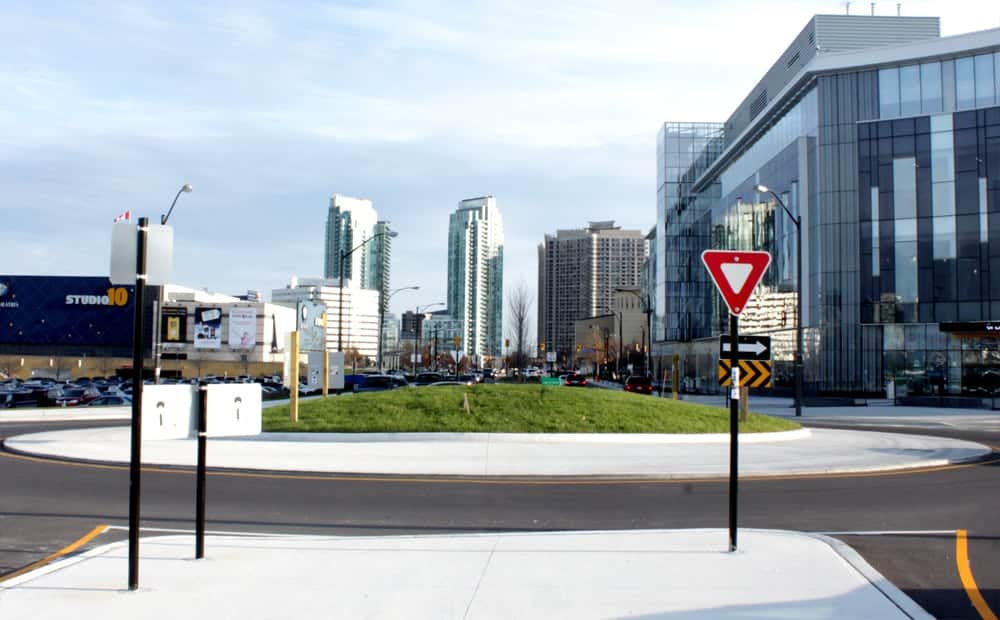 It was an early evening in the middle of rush hour traffic, and I was driving southbound on Duke of York Blvd. approaching the new roundabout. A woman in a minivan directly in front of me stopped, made a sharp left turn to try to enter the Square One Shopping Mall, and completely disrupted the feng shui of Mississauga’s first roundabout.  Horns were honking, including mine, at this poor woman who was a victim of poor roadside signage.

A roundabout is a 21st century road design, as not to be confused with olden day traffic circles and junctions. They are gaining popularity in Canada, but even more so in France, which has more than half the world’s roundabouts.  At a roundabout, vehicles are required to slow down and travel in a counter clockwise direction around a centre island.

If you haven’t tried out Mississauga’s first and only modern day roundabout, then you should, and when doing so, carefully take note of the signage attempting to explain the use of this.  It is rather convoluted, and I can understand how the minivan lady became a victim of the poor roadside signage.  I’m sure that this isn’t the first time a driver or a pedestrian has been confused on how to use this new road design.  There are multiple one way arrows, yield signs, and confusing street signage, not to mention the other vehicles, pedestrians, and cyclists that are also present. As well,  confusing signage painted on the road makes it appear as though you can make a left hand turn.

With so much activity happening all at once, it’s understandable when one freezes under pressure.  I am not an urban planner; however, I think that simple signage would have been more effective in alleviating the confusion of utilizing this street.

The roundabout was introduced at the intersection of Duke of York Blvd. and Square One Drive in conjunction with the opening of Sheridan College in order to slow down traffic, control car noise pollution, create a more environmentally friendly street and make this intersection much safer for pedestrians

In an effort to assist roundabout newbies, I’ve created a roundabout guide.  Feel free to print it, study it, and keep it handy for your trips to Square One, Sheridan College or any of the surrounding areas which will require the use of Duke of York Blvd.

How to use a Roundabout for Drivers

How to use a Roundabout for Pedestrians and Cyclists

Here you have it.  It’s your roadside guide on Mississauga’s first and only roundabout.  It seems like an eyeful to watch out for, but once you get the hang of how to use a roundabout, it’ll be easy breezy, just like riding a bike.  In a nutshell, just go with the flow, counter clockwise that is.