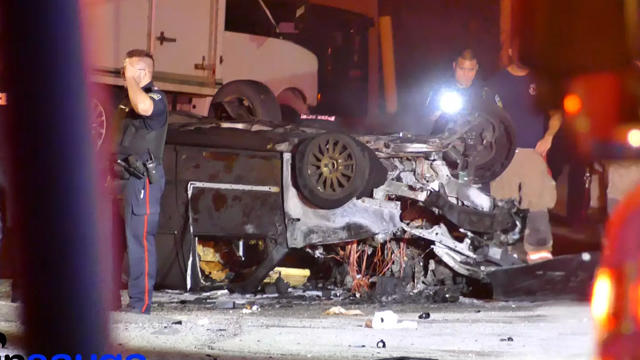 The OPP are reporting that a 22-year-old man from Kitchener has been arrested in connection with Friday morning’s fiery road rage collision that ended with a fight and a car on fire.

In the early hours of Friday morning, a road rage incident in Mississauga ended in literal flames when a car crashed into a wall during an altercation with a group of motorcyclists.

According to OPP Sgt. Kerry Schmidt, an incident at Dixie and the 401 involving a group of motorcycles and a passenger vehicle occured around 1 a.m. this morning and ended in a serious collision and alleged violence against a female driver.

Schmidt said that a group of motorcyclists were traveling westbound on the 401 and were blocking some lanes. The vehicle tried to get around them and there was an interaction between the motorcyclists and the car. During the altercation, the vehicle was deliberately damaged.

All the cars, including the motorcyclists, got off the highway at Dixie Rd. and a confrontation occured.

The female driver got out of the vehicle and was allegedly assaulted by one of the motorcyclists. At that point, she stayed outside of her vehicle and the male passenger got into the driver’s seat and continued down Dixie. The motorcycles started following and at some point, just off of Dixie and south of the 401, the vehicle was involved in a single vehicle collision. It rolled over into a retaining wall and burst into flames. The driver was able to get out and only sustained minor injuries.

As of now, the OPP is looking for witnesses who can assist in the investigation. Anyone with any information is asked to call the Port Credit OPP at 905-278-6131.

The police are reminding people not to get involved with or engage with other motorists.

Thankfully, no major injuries have been reported.

The Kitchener man, who was driving the vehicle, has been charged with dangerous driving, drug possession and other Highway Traffic Act violations.