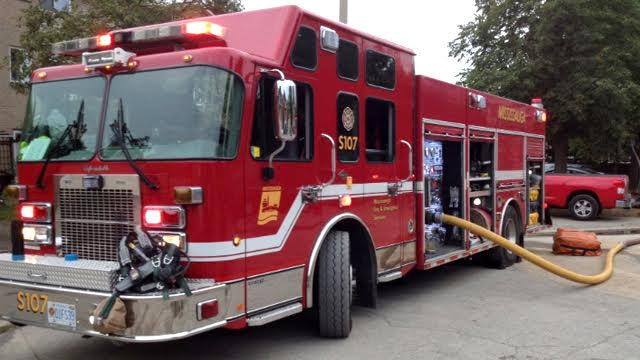 UPDATE — A fire at a building in downtown Hamilton on Thursday (Aug. 12) that caused approximately $60,000 in damage was caused by an unattended candle, according to Hamilton Fire Department chief Dave Cunliffe.

Cunliffe said in an email that HFD were called to 8 Tisdale St. at the corner of King St. E to reports of a structure fire shortly after 10 a.m.

When crews arrived at the three-storey building that houses businesses and residential units, there was heavy smoke and fire visible on the second floor.

“Given the rapidly changing conditions and the nature of the occupancy the alarm was upgraded to bring additional resources from across the City to assist,” Cunliffe said.

“Firefighters immediately entered the building and began both search and rescue and firefighting operations.”

Several of the residents were already in the process of evacuating the building but one resident and their pet had to be rescued from the third-floor window.

Crews brought the fire under control quickly as it was confined to an apartment on the second floor.

“hree residents of the building were assessed at the scene by Hamilton Paramedics but refused treatment,” Cunliffe wrote.

“Damage is estimated at $60,000 and it has been determined that the cause of fire was an unattended candle.”

ORIGINAL STORY: Hamilton Fire Department crews are on the scene of a fire in downtown Hamilton on Thursday (Aug. 12).

According to several Tweets, HFD said that they were called to a multiple-alarm structure fire on Tisdale North shortly after 10 a.m.

Several roads in the area, including portions of King and Main, were closed as crews brought the blaze under control.

The damage to the building appears extensive and there have been no reports of injuries as of yet.

Crews remain on scene and motorists in the area should expect some delays.