Up to police to investigate, Trudeau says of being pelted with gravel on campaign 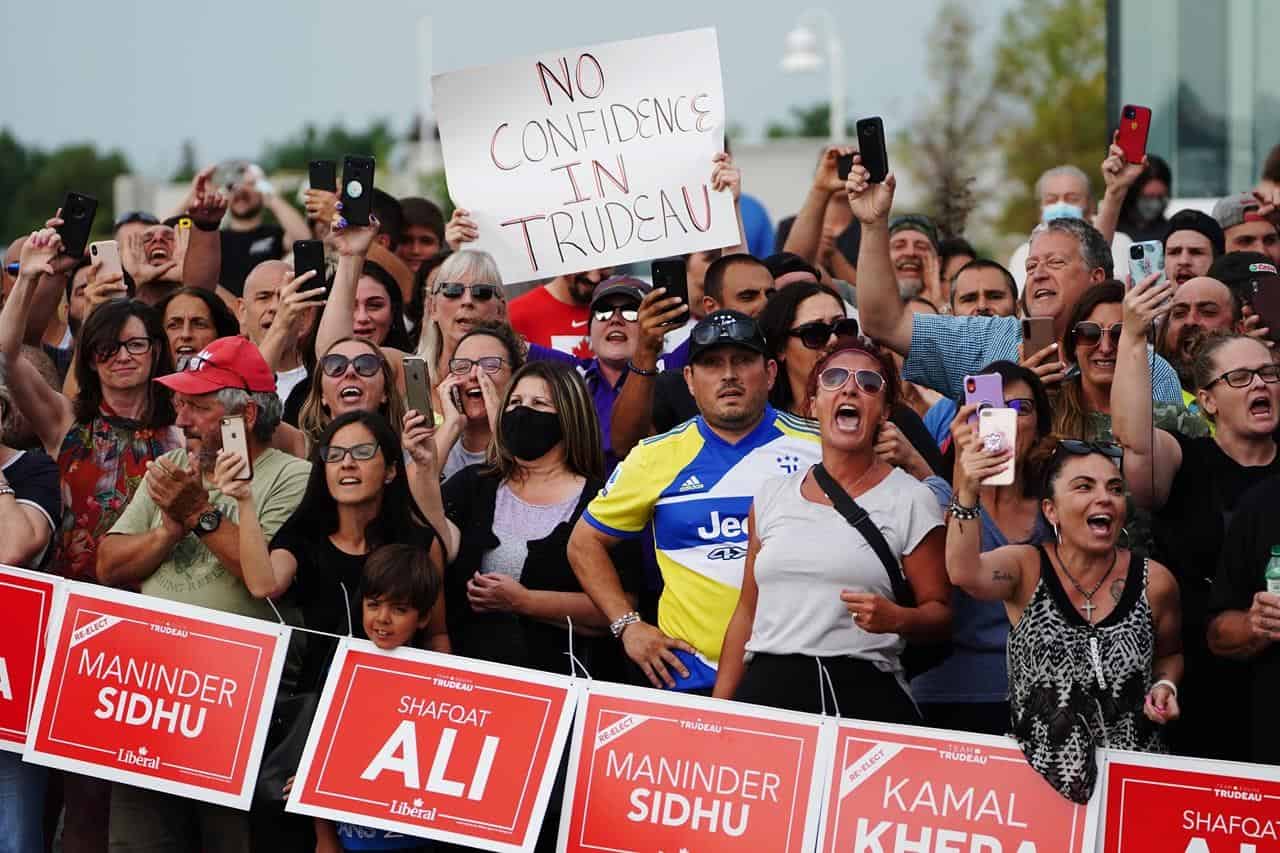 Protesters wait for Liberal Leader Justin Trudeau to arrive at a campaign event in Bolton, Ont. on Friday, August 27, 2021. THE CANADIAN PRESS/Sean Kilpatrick

OTTAWA — Liberal Leader Justin Trudeau said he will leave it to police to decide whether charges are warranted after he was pelted with gravel at a campaign stop in London, Ont., on Monday.

Trudeau said he felt the stones hit him but that he wasn’t hurt.

“The RCMP will make decisions about followups,” he said Tuesday morning at an event in Montreal.

He was there to discuss the Liberals’ plan for housing, but spent most of the news conference instead answering questions again about the security of his campaign.

“I did have a conversation with (the RCMP) about what happened and assured them that I was physically unharmed,” he said. “And I know that there will be ongoing conversations about how we make sure … everyone who comes out to partake in political democratic events continues to be safe.”

Trudeau said it is “absolutely unacceptable” to throw things at a campaign rally, and that he isn’t afraid for his own safety but for that of his volunteers, his security detail and journalists covering the campaign.

He noted, however, that it’s also not just happening at political rallies. He pointed to the harassment of health care workers by anti-vaccine and anti-mask crowds gathered outside hospitals across Canada, or to the behaviour store clerks and restaurant workers have put up with for months when asking patrons to follow COVID-19 rules.

“I am inspired by those people who continue to do the right thing in the face of anti-vaxxer mobs who are not respecting the basic science and the basic decency that Canadians have rightly come to expect from each other,” Trudeau said.

The London stop was the latest Liberal tour event to be sidetracked by the arrival of such an “anti-vaxxer mob” but the first where he was physically assaulted.

But it’s not the first sign of violence for Liberals. Calgary Centre Liberal candidate Sabrina Grover said two of her volunteers were assaulted when they were out door-knocking on Sunday.

A Grover campaign spokeswoman said a police complaint has been filed.

“Slapping and spitting on someone because they represent a political party that you don’t support is unacceptable,” Grover said in a written statement.

Party leaders were united in their condemnation of the violence at the Trudeau event.

“There is never an excuse to intimidate people, to promote violence or to harass people, when in Canada we should have a healthy debate about the future of our country,” Conservative Leader Erin O’Toole said at his Tuesday news conference at an Ottawa hotel.

“That type of conduct is unacceptable towards anyone.”

NDP Leader Jagmeet Singh said the behaviour crossed a line, noting when someone throws a rock their intention is clearly to hurt someone.

“That is horrible and that’s wrong,” he said while taking questions from reporters in Toronto.

Singh’s campaign stops have not seen the same kind of angry crowds but the NDP leader is regularly subjected to racist insults, including from people driving by his events who have hurled hateful slurs out their windows as they pass.

Bloc Québécois Leader Yves-Francois Blanchet said there is never an excuse to intimidate or be violent.

Annamie Paul, leader of the Green party, has said previously her campaign has been targeted with racist attacks and threats on social media.

People’s Party of Canada Leader Maxime Bernier also joined the chorus, even though the crowd at the Trudeau event was dominated by his supporters, raising PPC signs and wearing PPC clothing.

“Some idiot threw pebbles at Mr. Trudeau yesterday,” Bernier tweeted. “I condemn it. Words are our weapons. But physical violence is always wrong.”

Bernier pointed out, however, that someone smashed an egg on his head last week, and none of the other leaders were asked to comment on that incident.

It occurred in Saskatoon on Thursday, when a man posing as a supporter asked to have a photo taken with Bernier, and then hit him in the back of the head with the egg.

Some leaders are suggesting Trudeau must change how he is campaigning. Blanchet said if he went into hostile crowds like Trudeau has been doing, his RCMP security detail would frown at him. Singh said perhaps the location of events should be better chosen.