West Lincoln Mayor Dave Bylsma was refused entry into the West Lincoln Arena and Community Centre on Monday due to his unvaccinated status.

West Lincoln Mayor Dave Bylsma, who hasn’t officially revealed his COVID-19 vaccination status but often refers to himself as “unjabbed,” was refused entry into the town’s community centre on Monday (August 8) to help the town celebrate an Canada Summer Games event.

West Lincoln had been paired up with Saskatchewan in the 13-For-13 Festival and had originally planned to hold their entertainment outdoors.

However, when rain threatened, they shifted it into the West Lincoln Arena and Community Centre. That’s where the problem began.

According to town policy, Bylsma is presently forbidden to enter any municipal facility due to his unvaccinated status. Indeed, he can only appear online for actual council and committee meetings.

To that end, he couldn’t provide the traditional mayoral welcoming remarks. He was welcome to enter the facility as a private citizen but not in any official capacity.

The town would allow him to deliver his welcomes outdoor but he apparently refused. He chose, instead, to turn his non-admittance into a protest, sending out the below text asking supporters to join him outside to voice their disapproval. 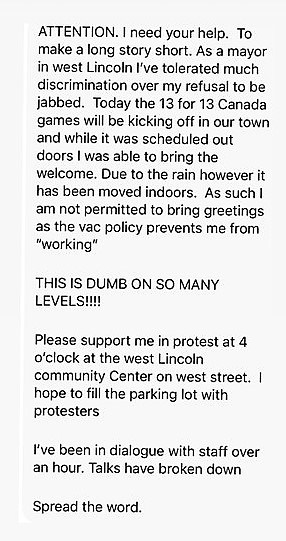 About three dozen Bylsma loyalists showed up, some in vehicles festooned in Canadian flags – the traditional “Freedom fighter” decoration – and angrily protested.

Reaction to the protest was mixed with some residents applauding Bylsma while others decried him using the event for his own personal ends.

Bylsma is no stranger to controversy around vaccinations and mandates. In April 2021, he openly defied the stay-at-home mandates and just a month later, was reprimanded for asking a female constituent if the vaccine had affected her menstrual cycle.

In February 2022, he saw 30 days pay withheld by regional council after his use of the word “purebloods” to describe the unvaccinated, a term that dates back to Nazi Germany’s disapproval of mixed race coupling.