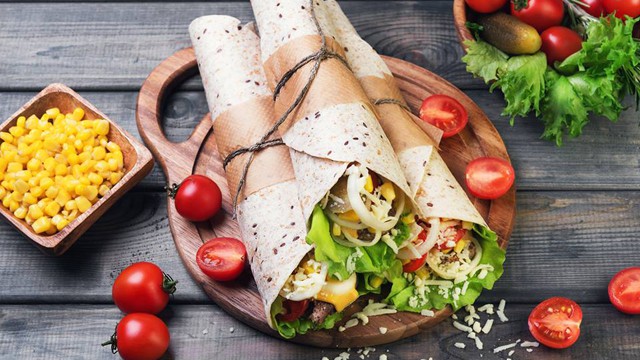 Although Mississauga has a handful of dine-in and take-out Mexican restos, they don’t dominate the food landscape the same way, say, burger and big box establishments do.

For that reason, it’s always exciting when a Mexican joint opens its doors in Mississauga.

According to restaurant operator Sagar Aurora, the brand new fusion restaurant will set itself apart not only by offering both shawarma and burritos, but also by offering fresh meat cooked on the spot.

“It’s a fusion between shawarmas and Greek food and falafel,” says Aurora, who also operates Slumdog Bar and Grill and Royal Paan and who also has a family member who runs the popular Brampton-based Indian joint Kwality Sweets and Restaurant (which is opening a location in Mississauga). “You see the meat being grilled right in front of you, fresh.”

Aurora said that he always wanted to fuse the two cuisines because he’s a great lover of both and wants to give diners meat that’s fresh–not too mention more varied.

“We’re going to offer three different kinds of meats,” he says. “Lamb was a favourite of mine, so we put lamb on the spits right there, along with beef and tofu for our vegetarian customers.”

In terms of menu, it’s exactly what you think it is and it’s pretty amazing in its unique simplicity. The resto will serve everything you’d expect from a joint that’s chosen to specialize in both Mexican and Middle Eastern cuisine–shawarma plates and wraps, falafel, salad, tacos and burritos.

If you’re wondering if the tacos will be filled with shawarma, you might be pleased (or surprised) to learn that the restaurant is actually just going to offer the best of both worlds rather than a lengthy list of fused dishes. If you want a traditional burrito with beef and cheese and sour cream, you can get that. If you want a big, hearty chicken shawarma wrap with garlic sauce and tomatoes, you can get that too.

Sagar said the restaurant’s defining feature will be, above all else, fresh meat.

“Instead of meat being cooked and grilled and boxed, we just slice it right in front of them. The focus is on fresh ingredients.”