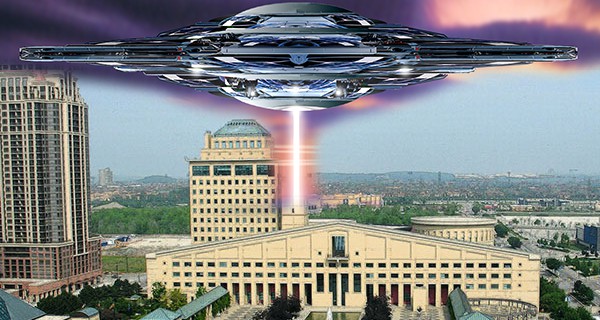 Are you afraid of an alien abduction?

Of course you are.

And you should be, because it looks like Mississauga has been the site of a few UFO spottings.

According to a recent article in the Mississauga News, data from the 2015 Canadian UFO Survey (the fact that that is actually a thing is amazing) reveals that there were nine reports of UFO sightings in the city in 2015.

The report, released by the Manitoba-based Ufology Research earlier this week, outlines various sightings in its extensive collection of data. Most of the website is archaically minimalist and looks like it was designed by a student taking a basic HTML class in 2003, but the content is nothing if not super fun (and interesting).

As for the Mississauga sightings, The News lists a few that occurred in the city. Last November, two grey/black truck-sized objects were seen floating across the sky during the day. In April, someone reported seeing a silver doughnut-shaped object in the later afternoon.

The Ufology (I was genuinely surprised that Word didn’t spellcheck that) Research of Manitoba has actually been collecting sightings from Canadian researchers since 1989 and compiling the data into its annual Canadian UFO Survey.

The website, basic though it is, is supremely detailed and vast. It even boasts a catalog of physical trace cases in Canada that date back as far as 1880. If you take a look, you can see a breakdown of various crop circle and other abnormalities that have occurred in Canada over the last century or so.

Last year, a whopping 1,267 UFO sightings were reported — the second highest total in the last 30 years. The year with the greatest number of sightings was 2012, when 1,981 reports were recorded. The survey essay mentions that 2012 was also thought by some to be the last year on earth, as it marked the end of the Mayan Calendar. So, perhaps the sightings had more to do with people’s preoccupation with the supposedly imminent end of days than extraterrestrial aircrafts, but who’s to say?

Interesting enough, The News mentions that two of the 2015 Mississauga sightings were categorized as “unexplained” (most sightings are resolved) — which is quite a feat considering less than 12 per cent of the sightings are placed in that same eerie category.

While the survey sounds a little kooky on its face, the researchers offer plausible explanations for the long-term upticks in sightings.

“Numbers of reported UFO sightings remain high,” the essay says. “Several theories for this can be suggested: more UFOs are present and physically observable by witnesses; more secret or classified military exercises and overflights are occurring over populated areas; more people are unaware of the nature of conventional or natural objects in the sky; more people are taking the time to observe their surroundings; more people are able to report their sightings with easier access to the Internet and portable technology; or even that the downturn in the economy is leading to an increased desire by some people to look skyward for assistance.”

The report also notes that not all observations can be thoroughly investigated and that Ufology is a bit of a dying breed.

That said, here’s a look at all the data for last year.

• Oct. 14, 5:30 p.m. – one person reported seeing a black ball hovering in the sky that changed into a square and disappeared into a cloud;

• Nov. 30, 1:30 p.m. – two grey/black rectangular objects the size of trucks floated across the sky. This was the other local sighting that was classified as “unknown”; and