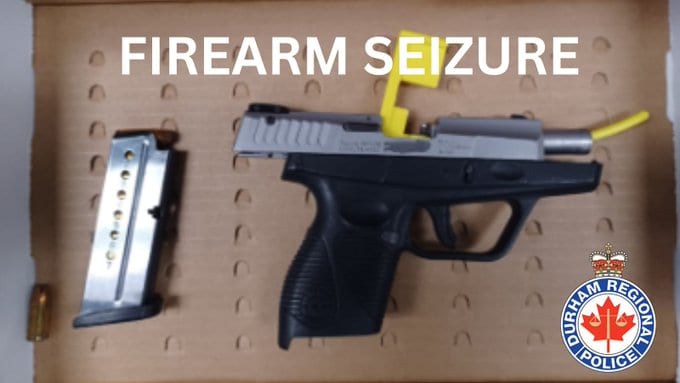 Two Oshawa men are facing numerous firearm and drug charges as well as threatening death and forcible confinement charges after the Durham Police Tactical Support Team was called to a south Oshawa home where a woman was seen being dragged into the residence.

Tactical Support Unit officers responded to the call Friday evening at 7:45 p.m. and entered the home, located in the Bloor St. E and Ritson Rd. S area, and arrested the two suspects who had attempted to conceal themselves in the home.

The woman received minor injuries and as the victim and suspects were known to each other police say there is no threat to public safety.

Police seized a loaded firearm during the raid and further investigation led to officers seizing a quantity of fentanyl.

Jordan Loveday, 31, of Oshawa is charged with possession of fentanyl; breach of probation and forcible confinement.

Both were held for bail hearings.

Police would like to remind the public that if you see any suspicious behavior in your neighbourhood to contact police immediately.

Anyone who may have information about this investigation is asked to contact Det. Dellipizzi of Central East Criminal Investigation Bureau Division at 1-888-579-1520 ext. 2766.