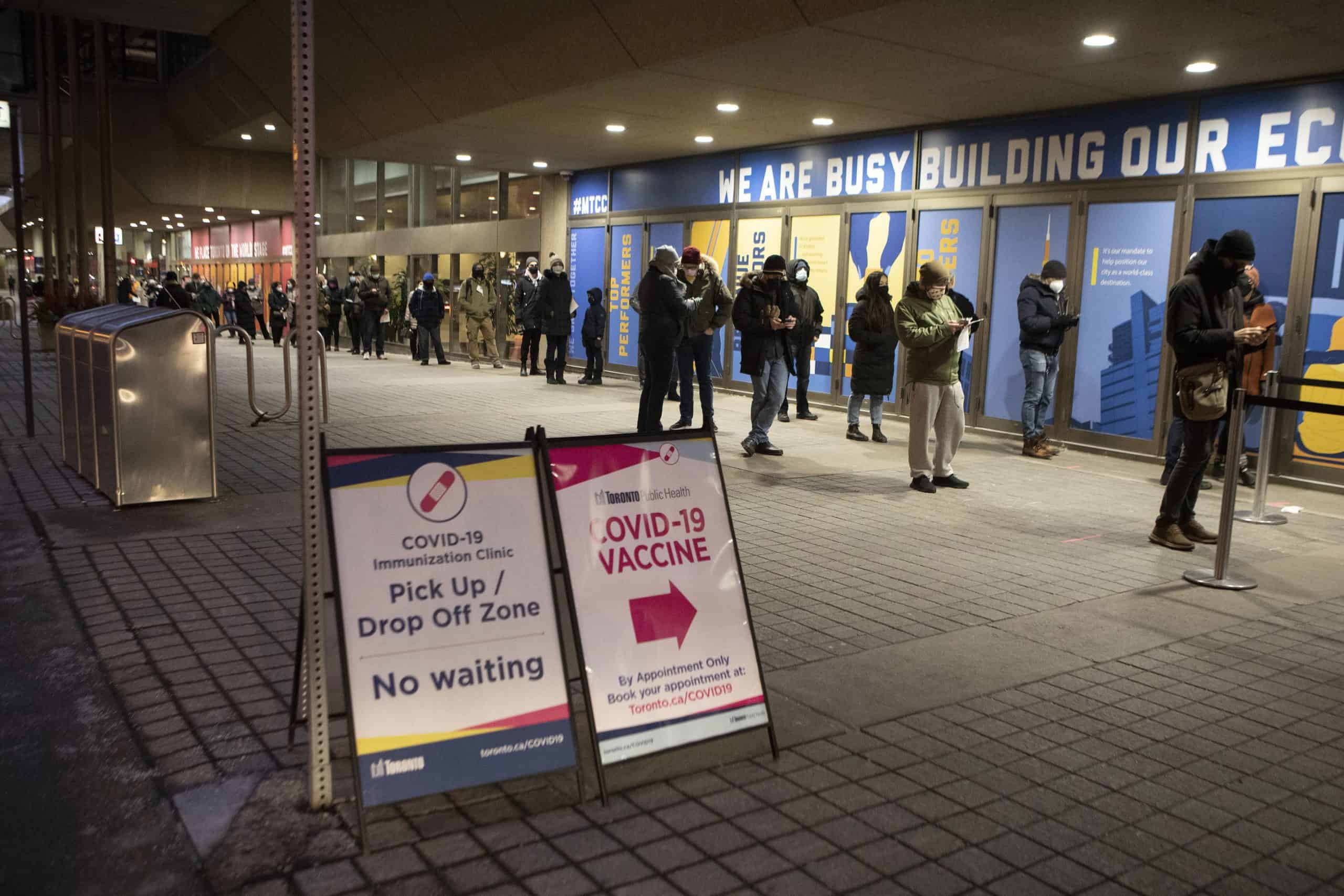 With Canada recording more than two million total COVID-19 cases as of Boxing Day, there are mounting concerns over how provincial health systems will cope with an expected surge in cases after the holidays.

Canadian Federation of Nurses Unions President Linda Silas said her members are bracing themselves for the “big bump” usually seen two weeks after exposure to the virus. She added there are worries hospital could become overwhelmed with new cases as a result of holiday gatherings and the highly transmissible Omicron variant.

Quebec reported 8,231 cases, and Health Minister Christian Dube urged people to reduce contacts after hospitalizations climbed by more than 140 over a four-day period. Dube tweeted that 320 people were admitted to hospital while 179 were released between Dec. 22 and 26. On Monday, Montreal’s executive committee renewed the local state of emergency that was declared on Dec. 21 for another five days.

Manitoba announced new public health restrictions on Monday after recording eight new COVID-19 related deaths and 2,154 cases over a three-day period. As of 12:01 a.m., indoor and outdoor gatherings are now capped at 50 per cent of the venue’s capacity or 250 people, whichever is fewer.

New restrictions are also now in effect in New Brunswick, where the province announced it would impose a 50 per cent capacity limit on restaurants, stores, bars, gyms and other establishments after officials reported 639 new cases of COVID-19 over a three-day period.

Labour Minister Seamus O’Regan says he has tested positive for COVID-19 after taking a rapid test.

O’Regan shared the result Monday on Twitter, noting he will stay in isolation and continue to follow public health guidelines.

The minister did not share where or how he contracted the virus or provide any details about the state of his health.

O’Regan tweeted he’s grateful for his three COVID-19 vaccine doses, “the thousands of health care workers keeping us safe, and for vigilance of millions of Canadians.”

Foreign Affairs Minister Melanie Joly made a similar announcement last week, saying she tested positive on a rapid test and would continue to work virtually until receiving the results of her PCR test.

LOS ANGELES _ Video released Monday showed Los Angeles police firing at a man suspected of assaulting customers last week at a clothing store, a shooting that also killed a 14-year-old girl hiding in a dressing room who was struck by a bullet that went through a wall.

The Los Angeles Police Department posted an edited video package online that included 911 calls, radio transmissions, body camera footage and surveillance video from the Thursday shooting at a Burlington store crowded with holiday shoppers. The department’s policy is to release video from critical incidents, such as police shootings, within 45 days.

Surveillance video showed the suspect attacking two women, including one who fell to the floor before he dragged her by her feet through the store’s aisles as she tried to crawl away.

Multiple people including store employees called police to report a man striking customers with a bike lock at the store in the North Hollywood area of the San Fernando Valley. One caller told a 911 dispatcher that the man had a gun. No firearm _ only the bike lock _ was recovered at the scene.

The 24-year-old suspect, Daniel Elena Lopez, died at the scene. Also killed was Valentina Orellana-Peralta, 14, who was hiding with her mother inside a dressing room.

“At this preliminary phase of the investigation, it is believed that the victim was struck by one of the rounds fired by an officer at the suspect,” police Capt. Stacy Spell said in the posted video. Police believe the bullet skipped off the floor and struck the dressing room wall.

The investigation is just beginning and it could take up to a year or more to complete, Spell said. The California Department of Justice is also investigating.

DAMASCUS, Syria _ Israeli missiles fired from the Mediterranean struck the Syrian port of Latakia early Tuesday, igniting a fire in the container terminal, Syrian state media reported, in the second such attack on the vital facility this month.

It is also a rare targeting of the port handling most imports for Syria, which has been ravaged by a decade-old civil war and western-imposed sanctions.

The state news agency SANA quoted a military official as saying that Israeli missiles fired from the west of Latakia hit the port’s container terminal, igniting fires that caused major damage. The unidentified official said firefighters were battling the flames for nearly an hour after the attack.

Syria’s state-run Al-Ikhbariyah TV ran footage showing flames and smoke rising from the terminal. It reported damage to residential buildings, a hospital, shops and some tourist sites near the port.

There were no immediate reports of casualties from the missile attacks, which activated Syrian air defenses, according to SANA.

A similar attack was reported on Dec. 7, when Israeli warplanes targeted the container terminal, causing fires and explosions.

An Al-Ikhbariyah TV reporter in the area said Tuesday’s attack appeared to have been larger and the explosions could be heard in Tartus, another coastal city more than 80 kilometres away. The reporter said ambulances were rushed to the scene but it remained unclear if there were any casualties.

The Britain-based Syrian Observatory for Human Rights, an opposition war monitoring group, said at the time that the Dec. 7 airstrike hit arms shipments for Iran-backed fighters.

There was no comment from the Israeli military, which has conducted hundreds of airstrikes on targets inside government-controlled parts of Syria during its 10-year civil war, but rarely acknowledges or discusses such operations.

Pakistani opposition leader Benazir Bhutto was laid to rest as the country’s army tried to quell a frenzy of rioting in the wake of her assassination.

TORONTO _ Mirvish Productions is permanently closing its musical “Come From Away” in Toronto, describing the costs of reopening amid tightened pandemic restrictions “prohibitively high and risky.”

The Gander, N.L.-set show had reopened after a 21-month pandemic hiatus on Dec. 15, but ended its run Dec. 22 amid a COVID-19 outbreak among crew.

The cases cancelled four December shows but the Tony Award-winning musical had planned to return Tuesday to the Royal Alexandra Theatre.

However, David Mirvish said Monday it’s become “bluntly apparent that it would be impossible to continue when this incredibly contagious variant has sent case numbers soaring.”

He bemoaned the lack of a government “safety net” for the commercial theatre sector, where revenue is strained by tightened pandemic restrictions that have imposed a 50 per cent capacity limit on Ontario’s large venues.

Without such support, he said “the risks, uncertainty and financial situation have left us without another realistic outcome.”

“I know this news is shocking, and it causes me and our partners great pain to have to take this action, but we are simply out of options. The most responsible way forward is to close the production,” Mirvish said Monday in a release.

“This is not the way any of us wanted this to end. ‘Come From Away’ deserves to have had many more years at the Royal Alex.”

Palmater was 53 when she died peacefully at her Toronto home on Christmas morning, her partner and manager Denise Tompkins said Monday.

A member of the Eel River Bar First Nation in New Brunswick, Palmater created, wrote and starred on her award-winning comedy variety show “The Candy Show” on APTN for five seasons.

She was also a regular co-host on CTV’s weekday talk show “The Social” and hosted “The Candy Palmater Show” on CBC Radio One.

Tompkins said Palmater was diagnosed with a disease called eosinophilic granulomatosis with polyangiitis (EGPA) earlier this month, but a cause of death was still unknown as of Monday.

The rare disease is characterized by inflammation that can impact organs including the heart and kidneys. It’s not known what causes the disease, according to the Cleveland Clinic’s website, but experts suspect it has to do with a malfunctioning immune system.

Details of a virtual memorial will be shared as soon as they are arranged.

This report by The Canadian Press was first published Dec. 28, 2021.