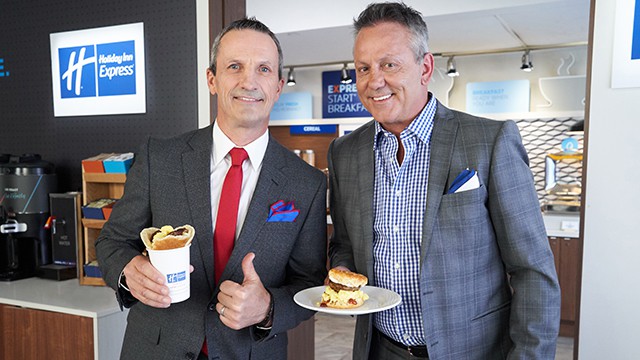 To celebrate the rollout of the new Express Start Breakfast Bar in Canada, the brand challenged two Canadian champions and hockey-rivals—Doug Gilmour and Guy Carbonneau—to create the ultimate breakfast creation in the READIEST Breakfast Challenge Canada.

Hockey analyst and former player Mike Johnson acted as referee and sampled the competing creations from the judge’s stand.

You can see a video the showdown below:

“In a spirited Toronto versus Montreal showdown, Gilmour and Carbonneau had three minutes to create their game-winning breakfast using only ingredients available at the Holiday Inn Express brand’s Express Start Breakfast bar,” Holiday Inn said in a news release.

According to Holiday Inn, the breakfast bar features more than 30 items to choose from, including pancakes at the push of a button, bacon, eggs, sausage. It also offers healthy alternatives, such as hard-boiled eggs, turkey sausage and fresh fruit.

As how the competition played out, Carbonneau was crowned the winner with his “Power Play Pancake Cup,” made with a fluffy pancake cone filled with fresh scrambled eggs and sausage.

His creation beat out Gilmour’s “Gloves Off Breakfast Sandwich,” a biscuit topped with strawberry jam, a sausage patty, scrambled eggs and cream cheese.

“With one of the oldest rivalries in hockey history, I knew I had to bring my A game. So, I packed all sorts of breakfast greatness into The Power Play Pancake Cup,” Carbonneau said in a news release.

To celebrate his big win, Carbonneau is inviting fans to create their own game-day breakfast combo at Holiday Inn Express hotels nationwide. Guests will receive 15 per cent off their stay when they book at holidayinnexpress.com/readiestbreakfastchallenge.