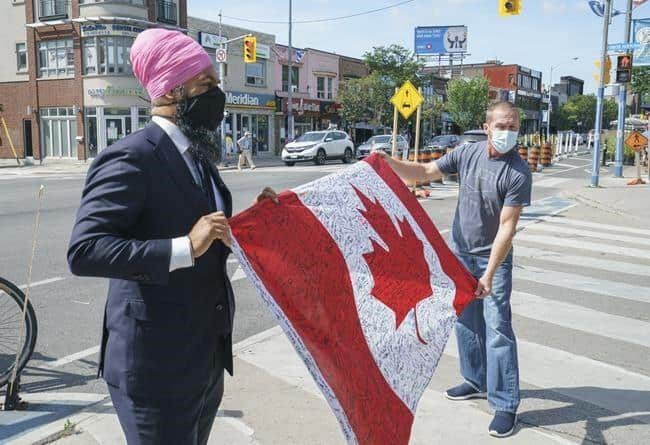 OTTAWA — The Truth Test is a project of The Canadian Press that examines the accuracy of statements made by politicians. Each claim is researched and analyzed to provide Canadians with facts instead of spin.

STATEMENT: “We saw that in this pandemic no other opposition party could point to a single victory that they fought for and won to make people’s lives better. They did not benefit from having those other MPs representing them.”  — NDP Leader Jagmeet Singh, Aug. 15, 2021.

Singh kicked off the NDP’s election campaign Sunday taking credit for improvements to various emergency aid programs introduced during the COVID-19 pandemic to cushion the impact of lockdowns on workers and businesses.

Among other things, he asserted that the NDP used its leverage in a minority Parliament to force the the Liberal government to double the Canada Emergency Response Benefit for jobless Canadians to $2,000 per month from the initial $1,000 per month.

New Democrats, he said, also forced the government to increase the wage subsidy to 75 per cent from an initial 10 per cent.

And he said they forced the creation of a paid sick leave that hadn’t existed at the federal level before.

By contrast, Singh asserted, other opposition parties did “absolutely nothing” to push the government to do more for people.

Singh’s assertion that “no other opposition party could point to a single victory that they fought for and won” is certainly not true. Both the Conservatives and the Bloc Quebecois have also repeatedly claimed credit for improvements to pandemic relief programs.

The Conservatives, for instance, rattle off a long list of “victories,” including the removal of GST/HST on face masks and face shields, rent relief for businesses, enhanced business loans, expanded emergency support programs to include expectant and new parents.

And all three opposition parties claim credit for pushing the government to boost the wage subsidy to 75 per cent from the initially proposed 10 per cent.

Whether any of those claims are accurate is another question. No doubt opposition pressure was a factor but it’s impossible to say whether the government would have adjusted its programs in any event, in response to public demand and pressure from premiers, business, labour groups, its own backbenchers and others.

Throughout the COVID-19 pandemic, but particularly during the early days of the unprecedented crisis, the government’s response constantly evolved as it struggled to keep up with a rapidly deteriorating economy, plug the gaps in the social safety net and deal with problems as they arose.

When the Liberals introduced a 10 per cent wage subsidy in March 2020, it was roundly criticized by business groups as nowhere near enough.

“It needs to be 75 per cent or more as is the case in Europe,” Canadian Federation of Independent Business president Dan Kelly said immediately.

Other business and labour groups echoed that view and all three of the main opposition parties took up the call.

When, several weeks later, the government bumped the subsidy up to 75 per cent, the opposition parties took credit.

Andrew Scheer, then leader of the Conservatives, tweeted that the government “took my advice.” Singh similarly took credit, although at the time he was generously prepared to at least acknowledge that business and labour groups also had something to do with it.

“Business and labour leaders have been working with us to push the government to increase the wage subsidy,” Singh tweeted. “Today they listened.”

In a speech in the House of Commons in April 2020, Scheer maintained his party had been “leading the way on useful, practical actions,” including pushing for tighter travel restrictions and border measures, increasing the wage subsidy and expanding the Canada Emergency Response Benefit to include “seasonal workers and those with limited incomes.”

In response to Scheer’s claim, Bloc Leader Yves-Francois Blanchet told the Commons: “I do not want to be the kind of person who takes credit for everything good but the Bloc Quebecois contributed to the wage subsidy, in addition to the fixed costs, the recognition of social enterprises and the changes made for growing businesses.”

He was, in other words, claiming credit for pushing the government to increase financial support for businesses to help subsidize their rent and to expand that support to more businesses.

The Bloc has also claimed credit for pressuring the government to provide more financial supports for seniors.

Singh can certainly claim credit for pushing harder than any other party for paid sick leave. He made that a condition of NDP support for the Liberal throne speech last September, without which the minority government would have fallen. Both the Conservatives and Bloc Quebecois voted against it.

When the Liberals agreed to his demand last fall, Singh proclaimed it a historic achievement, marking “the first step in achieving the first-ever, in the history of our country, federal paid sick leave for Canadian workers.”

However, four months later when COVID-19 cases were spiking among essential workers, Singh was less enthusiastic about claiming ownership of the Canada Recovery Sickness Benefit.

The $500 benefit, available in weekly increments for up to two weeks, was criticized as inadequate since workers had to apply for it only after taking unpaid time off for illness and it did nothing to help those who needed a day or two off to get tested or vaccinated.

“The Liberals are sitting on the sidelines while essential workers and their families are being admitted to ICUs because of the virus,” Singh charged in January, urging the government to fix the paid sick leave “so essential workers don’t have to choose between going to work sick or losing a paycheque.”

He mentioned none of that Sunday when claiming credit for paid sick leave.

While the NDP can claim its share of the credit for pushing for improvements to pandemic relief programs, it is certainly not the only opposition party to do so. None of the opposition parties’ claims takes into account the pressure the Liberal government came under from business, labour, the public and others to expand, enhance and adjust the programs as the economic fallout from the pandemic worsened.

This report by The Canadian Press was first published Aug. 17, 2021.