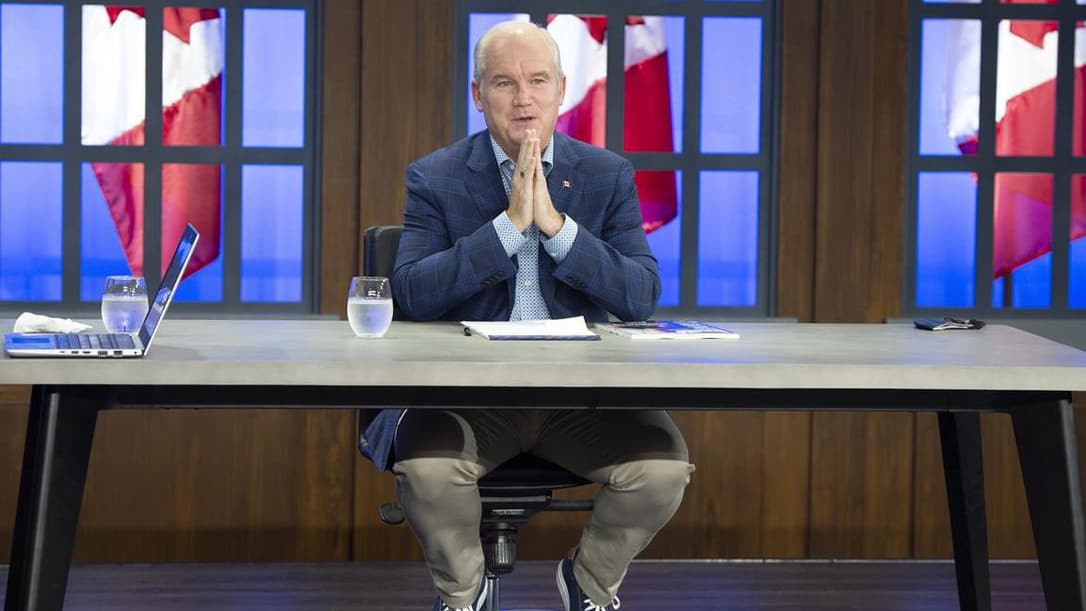 OTTAWA — The Truth Test is a project of The Canadian Press that examines the accuracy of statements made by politicians. Each claim is researched and analyzed to provide Canadians with facts instead of spin.

His comment followed a tweet Sunday from the Liberals’ Chrystia Freeland, which included an edited video clip of O’Toole saying “yes” when asked during last year’s Conservative leadership contest if he supports “the provision of private, for-profit and non-profit health care options within the universal health system.”

“Last year, even as COVID-19 raged, Erin O’Toole was asked if he would bring private ‘for profit’ health care to Canada. He responded unequivocally: yes,” Freeland tweeted.

Conservatives accused the Liberals of editing the video clip to remove O’Toole’s qualification that the health system needs to “make sure that universal access remains paramount” even as it employs “public-private synergies” to bring innovation to the system.

They accused the Liberals of employing “American-style divisive politics” and spreading “misinformation” and they wrote the commissioner of Canada elections, demanding an investigation.

The Liberals challenged Twitter’s label and noted that Freeland also tweeted the full video clip of O’Toole’s comments. Leader Justin Trudeau encouraged Canadians to view the clip in its entirety and see O’Toole “double-down on his belief in a two-tiered, private, for-profit system.”

The issue comes down to the question of whether private, for-profit health services can be offered without undermining Canada’s universal public health-care system.

Advocates for a universal public system say it can’t.

“I would say that introducing more private pay into the health system undermines our universal public health care, regardless of whether or not you’re saying you’re still going to allow for universal access,” says Dr. Melanie Bechard, chair of Canadian Doctors for Medicare.

“Using our limited resources to serve a select few patients who can actually afford to pay privately leaves less resources for everyone else in the system and worsens things off for the vast majority of Canadians.”

It is “essentially” creating a two-tier health system — one for those who can afford to pay for private service and another for everyone else, Bechard adds.

In the video, O’Toole raises the example of Saskatchewan, which allows private clinics to provide magnetic resonate imaging (MRI) scans. He calls it a “brilliant” innovation that uses private sector investment to increase the number of MRI machines in the province, thereby “making sure that wait times for everyone go down.”

Proposing a parallel private system to reduce wait times “is like seeing your house is on fire and throwing a bucket of gasoline on it,” Bechard adds.

Steven Staples, national director of policy and advocacy for the Canadian Health Coalition, points to a British Columbia Supreme Court ruling last September that dismissed a challenge from private health-care advocate Dr. Brian Day, who had argued that patients have a constitutional right to pay for private care due to lengthy wait times in the public system.

The court ruled “that increases in privatization will not only benefit those who can afford to jump the queue, but it increases inequalities in the system, in particular by lengthening wait times for everybody else,” Staples says.

Saying the Conservatives support universal public health care at the same time as they support allowing private delivery of some medical services amounts to them “trying to have it both ways and they can’t,” he says.

“By increasing for-profit players into the health-care system, you will create a greater two-tier system.”

O’Toole dodged repeatedly Monday when asked what other health services he believes could be privatized. He said only that a Conservative government would increase unconditional annual health-care transfers to the provinces and would “respect their jurisdiction” by not trying to dictate how the money should be spent.

That would appear to mean that O’Toole would scrap the Trudeau government’s policy of penalizing a province that allows patients to be charged a fee for privately provided medically necessary diagnostic imaging services. Under a policy adopted in April 2020, the government can deduct those patient charges from a province’s share of annual health transfer payments.

If re-elected, a Liberal spokesperson said the Trudeau government would enforce that policy when it comes to Saskatchewan’s private MRI clinics.

“If the patient charges in Saskatchewan are not eliminated, a clawback will occur,” Thierry Belair said.

O’Toole has not explained how his support for allowing private, for-profit medical services squares with his assertion that he fully supports universal, public health care. Public health-care advocates say he can’t have it both ways.