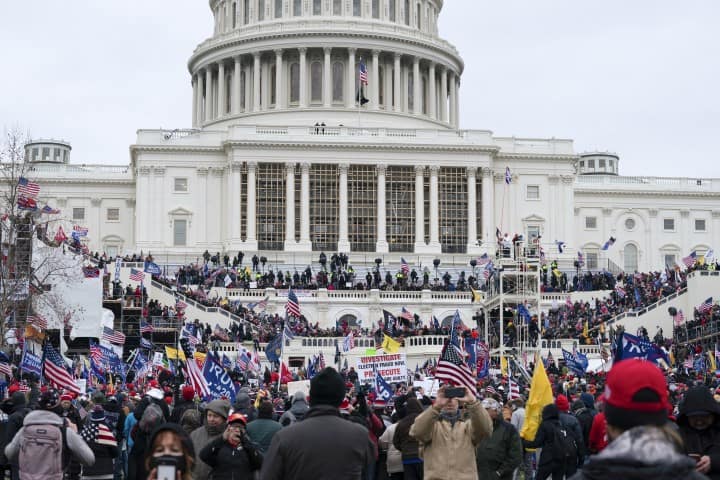 The images that emerged were jaw-dropping: a man in a Make America Great Again hat, his feet up on Speaker Nancy Pelosi’s desk. Trespassers occupying the Senate chamber. Capitol police pointing their service weapons. Staffers cowering under desks.

Outside, as police sirens echoed and helicopters pulsed overhead, thousands and thousands of others cheered and celebrated news of the breach, waving flags, firing flares and popping smoke grenades from atop the Capitol balcony.

D.C. police Chief Robert Contee confirmed that shots were fired inside the Capitol and at least one person was taken to hospital with a gunshot wound.

Trump, who earlier vowed to a crowd outside the White House that he would never concede defeat in November’s presidential election, issued a tweet urging supporters to “stay peaceful.”

“They are truly on the side of our Country.”

He later posted a brief video urging occupiers to “go home,” but also repeated his claim the election was stolen and expressed solidarity with the crowd: “We love you,” the president said. “You’re very special.”

On the grounds outside the building, the mood was jubilant.

“This is not a violent insurrection,” said Nancy Murphy, who travelled from Saratoga, N.Y., to attend Wednesday’s protest and was front and centre when the clashes began.

“This is people who think they can pull a fast one and steal an election, and take our country away from us.”

New Hampshire resident Tom Monahan, helped by his mother, struggled to rinse the sting of pepper spray from his eyes as he described the moment when the chaos erupted.

“I was just trying to get a better look, be a part of history,” Monahan said as he frantically splashed water on his face.

“My mother and I went up the stairs, and we ended up getting way too close, going way too far. Next thing I know, it’s me and a whole bunch of police using spray and flash-bangs.”

Both insisted that the crowds would remain defiant.

“This is the people’s house in America,” Murphy said.

“They know what the constitution says; they’re just choosing not to follow it. And no. America says, ‘No.’”

As night fell, police had surrounded the vast Capitol grounds in force and were guiding protesters away.

President-elect Joe Biden, whose election win two months ago was supposed to be certified Wednesday, instead found himself addressing the nation and pleading for calm.

“Our democracy is under unprecedented assault,” Biden said, calling the protesters “extremists” who are “dedicated to lawlessness.”

“This is not dissent, it’s disorder, it’s chaos. It borders on sedition, and it must end — now,” he said.

Even Kirsten Hillman, Canada’s ambassador to the U.S., felt compelled to issue a statement.

“We are following the developments on Capitol Hill very closely,” Hillman tweeted. “All Embassy staff are safe and accounted for. We call for calm during this time.”

“Canadians are deeply disturbed and saddened by the attack on democracy in the United States, our closest ally and neighbour,” Prime Minister Justin Trudeau tweeted. “Violence will never succeed in overruling the will of the people. Democracy in the U.S. must be upheld — and it will be.”

“This attack on our Capitol will not be tolerated,” Pence said. “Those involved will be prosecuted to the fullest extent of the law.”

While Trump himself remained silent, White House spokesman Judd Deere eventually tweeted, “Go home. And go home in peace,” a statement he attributed to the president.

National Guard reinforcements were called in to help restore a sense of order, while D.C. Mayor Muriel Bowser imposed an overnight curfew beginning at 6 p.m. ET in an effort to disperse the crowds.

“I continue to urge all Washingtonians to stay home and stay calm,” Bowser told a news conference. “The behaviour that we are witnessing is shameful, unpatriotic and above all, it is unlawful.”

The protesters themselves provoked police officers on the Capitol grounds, Contee said.

“Due to the violent behaviour towards the police officers there, and their intent on gaining access to the Capitol, a riot was declared,” he said.

“It was clear that the crowd was intent on causing harm to our officers by deploying chemical irritants and police to force entry into the United States Capitol building.”

In late afternoon, Contee told a news conference that 13 people had been arrested, none of them a resident of Washington, and a number of guns had been confiscated.

Wednesday’s tumult erupted as Congress was certifying the results of November’s presidential election, a process several House and Senate members had promised to oppose.

And they followed the president himself airing familiar grievances before that crowd of thousands outside the White House, a sea of Trump banners and American flags snapping in a bitter January wind.

What is normally a staid exercise in constitutional process began Wednesday with Arizona Rep. Paul Gosar and Texas Sen. Ted Cruz formally objecting to the electors from their states.

A process that was expected to last long into the night is now in suspended animation — with Trump’s ongoing refusal to concede defeat now far more than just a falsehood-laced set of empty threats.

Adding to the tension was the shifting political landscape in Georgia, where Democrat Raphael Warnock was elected the state’s first Black senator and Jon Ossoff defeated Republican Sen. David Perdue.

Those Democratic victories have wrested control of the Senate away from the Republicans, a development that under normal circumstances would provide a clearer path for Biden’s presidential agenda.