Trudeau, Ford likely to be civil, unless there’s a COVID-19 surge: experts 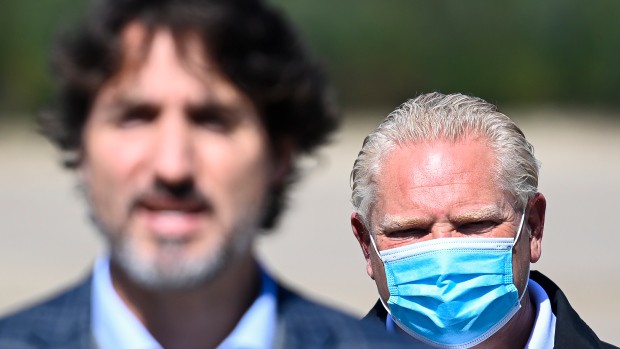 TORONTO — Voters in Canada’s most populous province will likely see their premier and prime minister on civil terms in the early days of this pandemic election campaign, experts say, though the tide could turn with a surge of COVID-19 cases.

Ontario Premier Doug Ford and Liberal Leader Justin Trudeau have sparred at times this year, largely on vaccine supply and border controls, but they may well find it mutually beneficial not to bicker in front of weary Canadians.

Ginny Roth, a vice-president at public relations firm Crestview Strategy, said Trudeau may find he wants an enemy in Ford partway through the campaign, but the Progressive Conservative premier likely won’t play ball.

“For Premier Ford, I think on almost every issue set it will not serve him well to get into a fight — including on COVID — and I think he realizes that,” said Roth, a former Progressive Conservative organizer.

Incumbents have fared well in elections during the pandemic, she said, and there seems to be a détente of sorts among them.

“I think that the smart political leaders realize that incumbents are kind of grouped together by voters,” Roth said.

“If voters think that Canada’s COVID response is positive right now, it’s in the interest of the incumbents to share the credit for that. If COVID goes badly again, yes, it will be in the prime minister’s interest to try to convince the public that it’s the provincial government’s fault.”

During the last federal election, Ford became Trudeau’s punching bag, a proxy Conservative bogeyman, but that’s what he needed in 2019 — not so this time around, said Andrew Steele, a vice-president at consulting firm StrategyCorp.

For Trudeau, this election will be more about positioning himself as the leader to keep Canadians safe, he said.

“If your message is, ‘I’m a safe port in a storm,’ you don’t make a lot of sounds like thunder and splash water around,” said Steele, a former Liberal senior staffer. “You want to be a statesman, you want to be above that interprovincial fray and show leadership.”

“If Trudeau does need a foil, Jason Kenney is a lot more unpopular than Ford is right now and he provides a much stronger example if he needs somebody to blame for not following COVID protocols,” he said.

If the pandemic starts to worsen, voters may question the timing of an election, Roth said.

“The Liberals are in a tough spot federally because they have been so much in the direction of urging caution around reopening that they can’t afford to be perceived to be threatening people’s health or to be hypocritical … launching a very reopening-style election campaign,” she said.

“The prime minister is going to be in a tough spot and you may see some premiers start to join in the (Conservative Leader) Erin O’Toole refrain” that now is not the time for an election.

Trudeau and Ford started the pandemic like much of the country, with an “all in this together” attitude, and their approval ratings soared.

But cracks have since started to show, and as Ford’s ratings have fallen he has hammered the federal government on vaccine supply, particularly during the second wave. During the third wave he went on the attack again, blaming “porous” borders for new variants entering.

For his part, Trudeau has suggested Ford was trying to deflect criticism of his own pandemic handling.

The border campaign was likely more about Ford shoring up his own base ahead of Ontario’s 2022 election rather than hurting Trudeau’s chances, said Carleton University political science professor Jonathan Malloy.

One of the COVID-19 thorns in Ford’s side that Trudeau could capitalize on is a growing chorus of people calling for the premier to introduce a vaccine certificate system as a way to bar unvaccinated people from non-essential activities.

Ford has so far refused, but polling suggests it’s a popular idea, and many groups within both the health-care and business communities support it.

“Trudeau is going to look very carefully at Ontario politics and particularly the seats he wants to target,” Malloy said.

The Liberals announced mandatory vaccination for federal workers and those in federally regulated industries days before the campaign, after earlier saying they were developing a vaccine passport system for international travel.