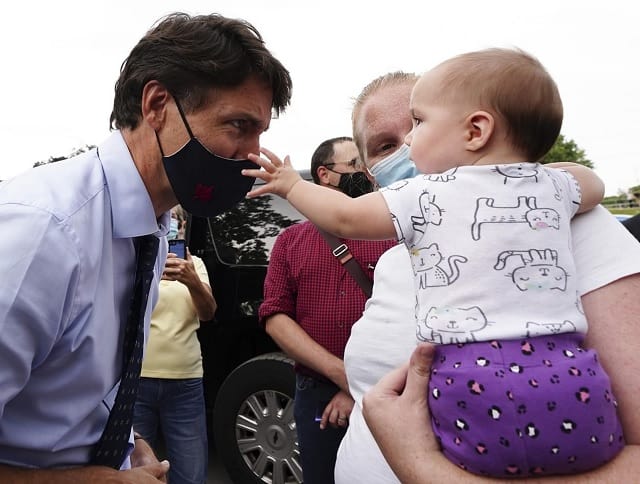 Liberal Leader Justin Trudeau says he is confident every province and territory will eventually reach an agreement with Ottawa for a new $10 a day child care program but warned it would require a re-elected Liberal government.

Trudeau took his campaign tour to a backyard of a family home in Markham on Tuesday (Aug. 17) to pitch the benefits of the $30-billion child care program the Liberals promised in last spring’s budget.

“I know child care is always a big challenge for people, so that’s why we’re really excited about the announcement we’re making today,” Trudeau said, visiting with Maggie Huang, her husband Danny Ruan, and their children, Austin and Michelle, in their living room.

Ruan told Trudeau that when their son was four, and Huang wanted to go back to work, they couldn’t find a child care space.

The Liberals signed child care deals with eight provinces in the weeks before Trudeau called the election. Ontario, home to more than one-third of the population, and Alberta are not among them.

Ontario’s education minister said Monday his government is open to an agreement on child care with the federal Liberals if it accounts for what he described as the province’s unique circumstances.

Stephen Lecce told a conference that Ontario’s Progressive Conservatives were in discussions about a potential child care plan “into the last hours” before the federal election was called on Sunday.

Trudeau would not say how close those negotiations were or what Ottawa would do to recognize Ontario’s existing programs, including offering full-day kindergarten in public school starting at the age of four.

“And we are very confident that our hard work is going to get there here in Ontario and right across the country.”

The Liberals have promised to reduce fees for child care by 50 per cent on average in the next year and introduce child care for an average of $10 a day within five years at a cost of $30 billion.

The plan is in direct contrast to the Conservative Party of Canada (CPC) platform which says the party would scrap existing deals in favour of a refundable tax credit of between $4,500 and $6,000 per child, aiming to cover up to 75 per cent of childcare costs for low-income families.

Trudeau said the Conservatives’ plan “is exactly the worst thing for the country” and that it won’t create a single new child care space. He said the agreements they’ve made already should create more than 125,000 spaces in five years.

Conservative Leader Erin O’Toole said Tuesday his plan would come into effect immediately, not in five or six years.

“There are some families that have made out very well in this pandemic,” he said. “I’m helping the ones most impacted. The Conservatives are the only ones with the plan to help those families.”

Gordon Cleveland, an economist at the University of Toronto, said there are pros and cons to both policies.

“If you do as Mr. O’Toole is suggesting, and the Conservatives are promising, that doesn’t really address the accessibility issues, it doesn’t address supply constraints, it doesn’t actually lower the costs,” he said.

“Providers may just up their cost, knowing that people are getting … 75 per cent, getting an expense back or refundable tax credit. And yet at the same time, there is this concern with Mr. Trudeau, his plan, that it is too far off in the future to help people who could use the help now.”

Trudeau’s campaign tour was purposely targeting CPC-held ridings in the greater Toronto region Tuesday, with stops in Markham, Aurora and Barrie, all places where Conservatives won seats in 2019.

In Aurora, Trudeau’s visit to a local eco-shop and pass through a nearby outdoor terrace ended with some chaos, as anti-mask and anti-vaccine protesters arrived with bullhorns and placards, shouting at Trudeau not to make vaccines mandatory for kids and to stop making them wear masks.

Mask mandates are provincial jurisdiction and Trudeau has not said that children must be vaccinated but he is pushing a plan to require federal workers to be vaccinated.

Trudeau, who was also confronted by protesters at a stop in Cobourg, Monday, responded to the protesters this time by calling to them to “please get vaccinated” while a heavy security presence tried to usher him to his tour bus.

— Mia Rabson, The Canadian Press; with files from Jordan Press and Maan Alhmidi