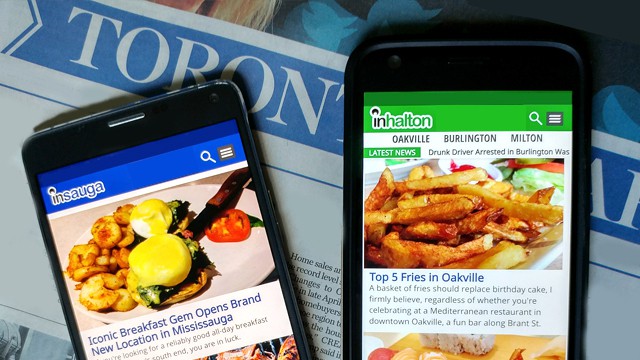 Torstar, the company that operates The Toronto Star and Metroland Media Group (MMG), has asked inSauga.com to shut down one of its sister sites.

On July 17, 2017 Torstar sent a letter to inHalton.com (a site operated by the owners and staff of inSauga.com and inBrampton.com) asking inHalton’s owners to immediately change our website’s name, URL, look, feel and branding. Torstar also asked inHalton to “discontinue using, displaying, reproducing, distributing and advertising the ‘inhalton’ name.”

Torstar event went so far as to ask us to “destroy” all our marketing materials, business cards and letterhead.

“Torstar even went so far as to ask us to “destroy” all our marketing materials, business cards and letterhead.”

The reason given for this was intellectual property infringement. Torstar is pushing what it calls a “potential passing off claim.” In short, it believes inHalton is attempting to divert web traffic from MMG’s Inside Halton website by mimicking the MMG publication.

We believe the crux of the issue is competition.

“We believe the crux of the issue is competition.”

“It is highly probable that MMG will suffer considerable damage as a result of this confusion in the form of lost advertisers, profits and readership,” the letter reads.

“All three websites–inSauga.com, inBrampton.com and inHalton.com–attract 687,000 unique visitors a month –more than the 550,000 GTA users that visit the Toronto Star’s website.”

Recently, The Globe and Mail wrote, in a story about the Toronto Star’s decision to shut down its Star Touch tablet app, that “the tablet’s monthly audience peaked at 80,000 unique readers, a small percentage of the Star’s monthly online readership, which hovers around 550,000 in the Greater Toronto Area alone.”

The inSauga.com brand is doing well on its own merits and has been for awhile. All three websites–inSauga.com, inBrampton.com and inHalton.com–attract 687,000 unique visitors a month–more than the 550,000 GTA users that visit the Toronto Star’s website.

Our three city blogs are indeed attracting readers and advertisers, but it’s not an accident, an oversight or a mistake.

According to Torstar’s letter, inHalton’s name is too similar to MMG’s Inside Halton–the brand’s Halton-area newspaper–and is “causing confusion” for readers. The letter mentioned that both websites serve the same communities (Oakville, Burlington and Milton) and report on similar stories.

This is true, as those cities make up the Halton Region and it would be irresponsible of inHalton.com to ignore stories that are also covered by competing media outlets, especially when those stories come from crucially important sources such as police and municipal governments.

The letter also mentioned that inHalton uses a similar interface (it doesn’t) and that inHalton mimics Inside Halton’s logo design and colour scheme.

This is simply not true. inHalton.com uses the same interface that the inSauga.com brand has been using for over five years. inHalton’s team chose the green banner to coincide with the Halton Region’s colours–not MMG’s look or feel.

As for the logo, the comparison doesn’t hold water. Other than both sites using green (and, as we said, there was method to our madness regarding that choice), the visual similarities end there. inHalton’s branding is identical to inSauga’s–and inSauga’s logo was established over five years ago and has been one of the website’s key identifiers since its launch in late 2011.

We should point out that MMG itself recently re-branded, so it hasn’t always had the exact same look and colour scheme.

“We believe that this letter is about intimidating competition, not website interfaces.”

inSauga.com has sought legal expertise from KPA Lawyers on the matter, and Barrister, Attorney-at-Law and Trademark Agent Dr. Emir Crowne raised an interesting point–namely that “potential passing off claims” are meant to deal with anti-competitive behaviour, not quash legitimate competition, “especially in matters that impact the free exchange of information and ideas which are so vital to our democracy.”

We believe that this letter is about intimidating competition, not website interfaces.

“We believe that this letter is intended to intimidate us into fundamentally altering the signature branding of our newest website. This is not something we’re prepared to do.”

Although the letter does not state so explicitly, the implication–dare we try to suss one out–is that readers looking for Halton news are stumbling across inHalton.com, confusing it for Inside Halton, and accidently increasing the traffic of an imitation website.

When an industry is in crisis (as media has been for some time), reinvigoration is crucial and worth celebrating. We have done our best to create a media company that works with the current technological landscape–not against it. We’ve worked hard to embrace and utilize social media and pair our hard and breaking news stories with pieces about food, fun and events.

We do believe there’s room for both Halton websites and that the colour green–popular though it may be–truly belongs to no one.