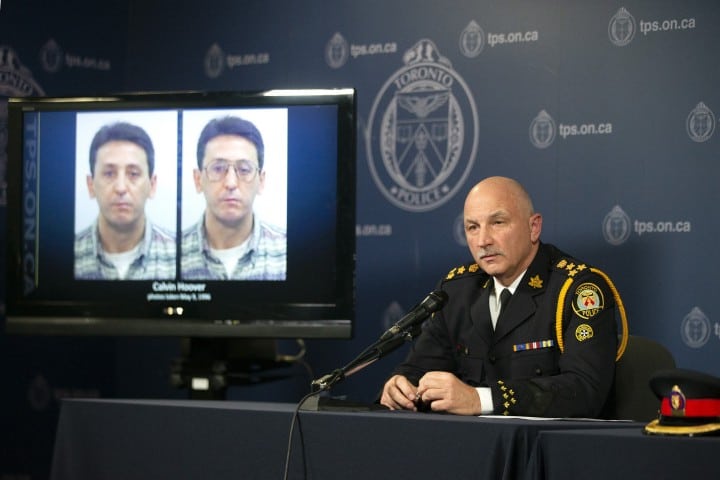 TORONTO — A man who died five years ago was the likely killer of a nine-year-old girl in a 1984 murder that sparked widespread revulsion and led to a notorious wrongful conviction, Toronto police said on Thursday.

At a news conference, Chief James Ramer said DNA evidence indicated Calvin Hoover, then 28, had sexually assaulted Christine Jessop and would have been charged with her murder if he were alive. A lawyer for Jessop’s family said they learned from police that Hoover died by suicide in 2015.

Ramer said police were still looking for more information on Hoover, who had lived near Christine’s family.

“Today’s announcement is only the first very important answer in this ongoing investigation,” Ramer said. “It has obviously generated many more questions.”

Christine, of Queensville, Ont., disappeared on Oct. 3, 1984, as she headed to a park after school to meet a friend. Her body was found on New Year’s Eve that year in a farm field about 55 kilometres away. Forensic evidence indicated she had been sexually assaulted and stabbed soon after her abduction.

Lawyer Tim Danson, who has represented the Jessop family, said they were in shock and still processing the sudden turn of events.

“There is an emptiness that Calvin Hoover did not answer for his brutal and cowardly crimes in a court of law and thereafter, in a prison cell,” Danson told The Canadian Press. “Suicide was too good for a person who committed such a horrific crime on such a beautiful innocent child.”

Hoover and his wife apparently had a “neighbour acquaintance” relationship with the family at the time, police said.

Ramer said Hoover’s DNA had been positively matched to semen found in Christine’s underwear. However, he was only identified as a potential suspect through genetic genealogy tracing done in the United States. Confirmation then came from matching the semen to an autopsy blood sample of his at the Centre for Forensic Sciences in Toronto.

The identification of Hoover as the culprit came with a great sense of relief, Ramer said.

“This has impacted the entire judiciary and the legal system in terms of prosecutors, judges and everyone involved in this process,” Ramer said. “We are all genuinely relieved that the person actually responsible for this has finally been identified.”

Hoover’s death did not involve foul play, Ramer said. While he did have a “dated” criminal record, it was of no significance to the killing.

Police also put out an old photograph of Hoover in hopes it might jog memories about his whereabouts at the time of the killing. They also said they were looking for information on his later activities.

Officers met with the Jessop family as well as with Guy Paul Morin, who was wrongfully convicted in the case, before the announcement.

“There’s nothing I could say today that can reverse the tragic events of 36 years ago,” Ramer said. “There are no winners.”

In 1985, police arrested and charged Morin, Christine’s then-24-year-old neighbour, in her killing. Morin was acquitted at his first trial, but convicted of first-degree murder on retrial in 1992 and sentenced to life in prison.

DNA evidence finally exonerated him 1995, prompting the Ontario government to apologize for his prosecution and pay him $1.25-million in compensation.

In a statement Thursday, Morin said he was relieved for Christine’s family, hoping the announcement would give them some peace of mind after going through a “dreadful ordeal” for 36 years.

“When DNA exonerated me in January, 1995, I was sure that one day DNA would reveal the real killer and now it has,” Morin said.

Morin’s wrongful conviction — based in part on police and Crown tunnel vision and jailhouse informants — was subject of a judicial inquiry.

“I am not here today to revisit that historical investigation,” Ramer said. “I believe there’s no greater acknowledgment of his exoneration than the continued efforts of the Toronto Police Service to identify the person responsible for Christine’s murder.”

Christine’s older brother, Kenney, who was a teen at the time of her disappearance, said two years ago that he believed there would eventually be a DNA match but that her killer would be dead.