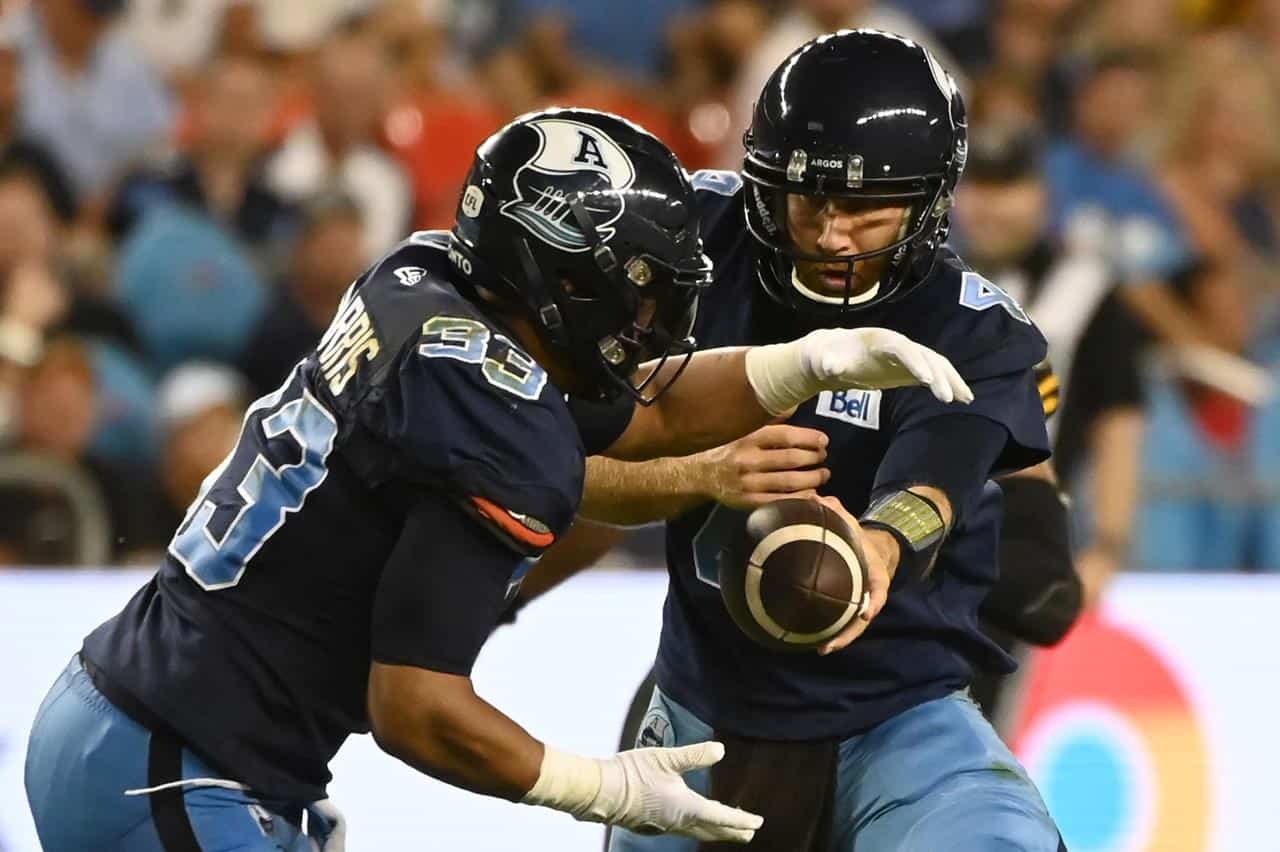 Running back Andrew Harris’s first season with the Toronto Argonauts has ended after an injury in Hamilton last weekend.

An Argos official said the club has determined Harris will require season-ending surgery after suffering a torn pectoral muscle in Toronto’s 34-27 loss against the archrival Tiger-Cats at Tim Hortons Field on Aug. 13. Toronto (4-4) is two points up, with one game in hand, on joint second-place Hamilton and the Montréal Alouettes (both 3-6) in the East Division of the Canadian Football League.

On Wednesday, Toronto announced Harris was expected to miss 4-to-6 weeks with the injury. But head coach Ryan Dinwiddie also did not discount Harris needing the operation.

Hamilton visits Montréal for a second-place showdown on Saturday (Aug. 20, 4 p.m.). The Tiger-Cats’ home-and-home with Toronto on Aug. 26 and Sept. 5 falls well within the Argonauts’ original optimistic timeline for Harris’s recovery.

The teams are tied 1-1 in their four-game season series. Toronto has a plus-7 advantage in point differential, which could come into play as a tiebreaker at the end of the 18-game regular season.

Harris, 35, had three rushes for 19 yards before leaving the game versus Hamilton in the first half. The 35-year-old Winnipeg native was in his first campaign with Toronto, joining the Argos as a free agent after a successful five-year tenure with the Winnipeg Blue Bombers (2016-19, 2021).

Harris led the CFL three times while with Winnipeg and helped his hometown team win consecutive Grey Cups, both at the expense of the Tiger-Cats.

Earlier this season, Harris became the first Canadian-born player in CFL history to crack the 10,000-yard career rushing plateau. He is also fourth on the CFL’s all-time yards from scrimmage list.

Toronto’s backup running back, third-year veteran A.J. Ouellette, has 11 rushes for 57 yards and five receptions for 52 this season. Ouellette played in the same U.S. college backfield with B.C. Lions quarterback Nathan Rourke, an Oakville native. They were teammates with the Ohio Bobcats in 2017-18, with Ouellette rushing for more than 1,000 yards in both campaigns.