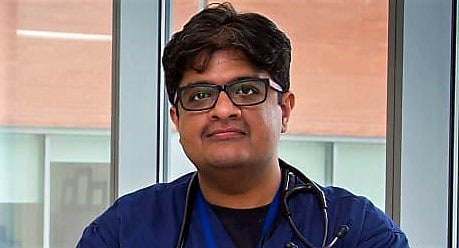 The two highest medical officials in the Niagara Region applauded when the American Food and Drug Administration (FDA) posted on social media Saturday (August 21) that people should immediately stop using a medication meant to treat parasites in horses and cows as a self-remedy for COVID-19.

There has been increased interest in a drug called ivermectin after a study came out of Israel a few months back touting it as a potential cure for COVID-19.

However, neither the FDA nor Health Canada recommends the drug and in fact, warns that it could cause sickness and hospitalization for humans.

While a form of ivermectin can be used to treat intestinal issues in people, the drug that people are ingesting instead is meant for horses and cows. It is a highly-concentrated dosage as the farm animals can weigh up to a ton.

So the FDA posted a tweet on the weekend that said, ““You are not a horse. You are not a cow. Seriously, y’all. Stop it.” 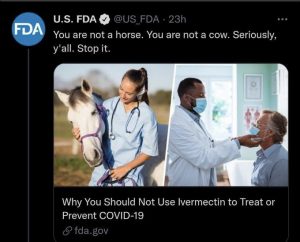 Both Dr Mustafa Hirji, Niagara Region’s Acting Medical Officer of Health and Dr Karim Ari, the region’s Head of Infectious Diseases, both retweeted the FDA post so that residents could see that ivermectin was not meant for human consumption.

It was not the first time Ali has waded into the debate.

When Niagara Centre MP Dean Allison posted on August 12 that the federal government should be studying ivermectin, Ali refuted the idea just as quickly. 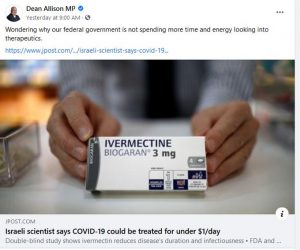 In response to the Conservative MP’s social media post, Ali said simply, “I cannot believe this.”

Ali said of Allison’s post, “The jury is out on Ivermectin and there is no clinical benefit shown in current trials. In fact, one of the recent studies had to be retracted because of inconsistencies.”

He added, “If it was that effective, we would use it. (The) world needs access to cheap and effective (treatments).”

Ali then stated what is obvious to the medical community. “You know what has shown to be highly effective in large trials time after time? Covid vaccines.”

“Want to curb and blunt the fourth wave that’s starting? Get your vaccine and get it soon! Vaccines will help us get through.”

Frustrated that politicians and keyboard warriors are often promoting false claims on social media, Ali added with frustration, “Please leave science alone! We are all tired of this and our jobs are even harder with misinformation and pseudoscientific peddling of boosters and drugs. I know I will be trolled incessantly over this! But this needs to be said.”