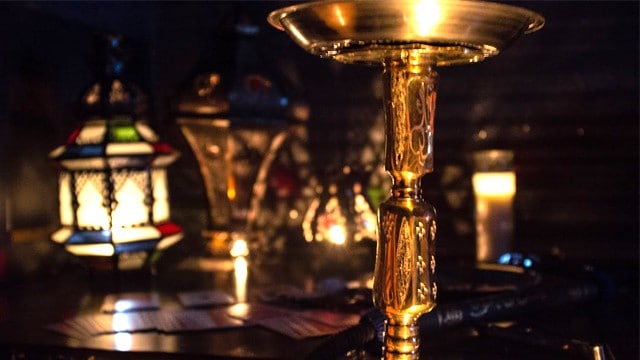 Despite having severe smoking bans in place, Mississauga has become all fogged up as of late. The cause seems to be the growing popularity of hookah bars. From chic resto lounges to laidback pubs, this culturally rich practice is quickly becoming a Mississauga pastime.

What is it about these flavorful tobacco blends and decorative smoking apparatuses that keep smokers and non-smokers alike coming back for more?

Though there might not be one definitive answer, it is clear from the diverse venues that offer this traditional Middle Eastern custom that the demand is there.

For the uninitiated, a hookah is a smoking device that uses a water jar or vase at the bottom. It is filled with water sufficient enough to submerge a few centimeters of the body tube, which is then sealed tightly. Liquids such a fruit juice or even alcohol can be added or substituted to add more flavour to the smoke. Tobacco is then placed inside the bowl at the top of the hookah, which is then covered by foil or a charcoal screen with a burning charcoal placed on top. Some cultures cover the bowl with perforated tin foil or a metal screen to separate the coal and the tobacco, which minimizes inhalation of coal ash with the smoke. This may also reduce the temperature the tobacco is exposed to, in order to prevent burning the tobacco directly.

While there is more than a passing resemblance to certain devices commonly used to smoke marijuana or hashish, hookahs are designed for use with regular or flavoured tobacco, otherwise known as shisha. Common flavours include strawberry, cola, apple and vanilla, though many other varieties are available. Unlike regular tobacco, shisha gets its distinctive flavour from being dried then soaked in molasses, honey and fruit. The washing process that is used in producing shisha produces less tar and nicotine than regular tobacco. As a result, it creates a milder smoke compared to that of cigarettes and cigars, making it more appealing to non-smokers.

Though the history of this leisure pursuit originates in the Middle East, its purpose is still the same. That is, to bring people together. In the Arab world, smoking shisha is a social activity which occurs at the chief social gathering places. Smoking is done with a single or double house hookah, with sometimes even triple or quadruple hookahs being used for parties or small gatherings.

Mississauga, hookahs are also being utilized as a social activity is some of the best communal spots in town. There are even some “underground” spots that offer this unique smoking method, though you might need a well-established guest to get you in.

If you’re looking to dress up a bit and enjoy some fine dining with your shisha, then you might want to head across the street to Zanobia Restaurant and Lounge. This fully licensed restaurant offers guests traditional Lebanese cuisine year-round. In the warmer months, visitors can also enjoy an assortment of tobaccos on their elegant heated patio. With parties going ‘til the late hours of the night, it’s a good thing that the bowls only cost $9 each.

If you’re looking for a tobacco-free hookah experience, then Jasmine Restaurant and Juice Bar is the spot for you. Located on the far west side of Sauga, on Dundas near Winston Churchill, this place is known more for its food than its service. With appetizing authentic Middle Eastern fodder, this venue is often crowded with regulars. Its spacious and comfortable seating area and friendly staff makes the restaurant quite enjoyable. There is a good variety of shisha, though it’s not “authentic,” as it is a tobacco-free blend. Wanting to stay true to the culture, Jasmine uses this blend of shisha in order to avoid indoor smoking bans; a practice that many venues across Canada have adopted to keep this social activity in their establishment.

A shisha lounge that offers a full service Halal menu. The resto lounge does not serve alcohol however they do serve mocktails and a variety of signature shisha blends. “The whole culture behind shisha’s is it’s one of those things that bring people together, so it encourages community, it encourages people to socialize and gives people another reason to get together”, says Owais Jaleel. The shisha’s you will find at Haze are imported from Egypt, a premium brand called Khalil Mamoon which is one of the best designed shisha’s in the market.

As the popularity for this pastime increases, and the word spreads of these already popular hookah bars, it won’t be long before more spots like these open. Whether a first time smoker or a veteran, be sure to check out these venues and see what all the hype is about.