From dining on aged Wagyu beef to eating Yakitori under the tracks, two neighbourhoods you have to visit for food in Tokyo are Ginza and Yurakucho.

Fortunately, they are directly beside each other.

Ginza is Tokyo’s most famous upscale shopping and dining district and it features some of the best restaurants in the city. if you’ve ever seen Japan featured in a Hollywood movie, some of those scenes were most certainly set in Ginza.
I’m sure you have seen this building before below. (Wako building in Ginza)

Directly beside it is Yurakucho, which offers a dining experience you will not get at home. Yurakucho has restaurants built directly under the elevated train tracks that carry the Shinkansen (bullet train).

The bustling area around the “underpass” at Yurakucho Station can be traced back to 1910, when the overhead railway connecting Shinbashi and Yurakucho, the third oldest JR station in Japan, was completed. It was much talked about for being the first overhead railway designed to support shops underneath. You can get a glimpse of post-war history under the brick arches that survived the air raids at the end of the war.

The official name of the red brick arched structure on the Hibiya side is “Daiichi Yurakucho Kadoubashi.” Designed by Rumschöttel and overseen by Parzel, both from Germany, the structure still stands today as it did when it was built and is loved by many.

Let’s try the top 5 most popular dishes in Ginza and Yurakucho:

A grilled skewer bar where you drink while standing. There are some chairs but they basically cannot be used except on weeknights after midnight.

It is the first bar in Japan that installed a dedicated highball server (Highball Tower 1) with Suntory’s co-sponsorship. Original highball drinks made with Suntory’s Kaku whisky (launched in 1937 and known as a true Japanese whisky with a rich flavour and aroma that suits Japanese people’s refined palates) are popular. 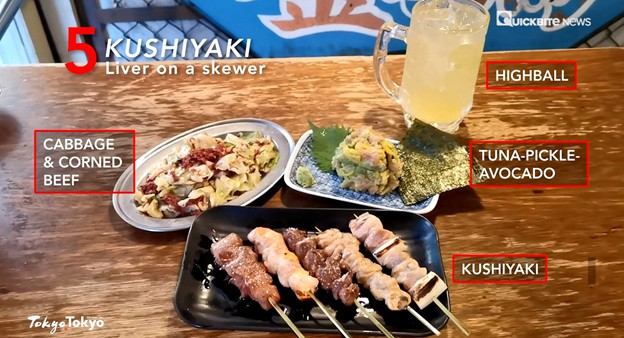 Livers on a skewer
The most popular items on the menu (that are made with the finest quality liver), the grilled livers on skewers do not have the characteristic smell and can be enjoyed by people who do not like the taste of liver. Enjoy them with sesame oil and grated garlic, and pair with a highball drink for palate cleansing action and strong carbonation.

Tuna-pickle-avocado mix
Tuna-pickle is most popular with women. Mix chopped tuna, pickled daikon, and avocado and put the mix on nori, roll it up and eat. The crunch from the nori and pickles combines with richness of tuna and avocado to bring out the refreshing taste of highball drinks.

Highball
Highball is the name for a family of mixed alcoholic drinks that are composed of an alcoholic base spirit and a larger proportion of a non-alcoholic mixer. Well-known examples of highballs include the Seven and Seven, Scotch and Soda, Rum and Coke and Caipirinha-highball. A highball is typically served over ice in a large straight-sided highball glass or Collins glass.

Initially, the most common highball was made with Scotch whisky and carbonated water, known simply as a ‘Scotch and Soda’.

About “Drinking while standing”
Since the Edo period in Japan, it was common for people to pay for sake at the storefront of a sake merchant and drink it while standing.

Drinking while standing stopped in 1943 amidst the Pacific War, as alcoholic beverages became rationed. But after the war, it came back as an illegal practice on the black market. In 1949, after the liberalization of alcohol sales, standing bars legally reopened and the popularity of drinking while standing grew until it peaked in the 1960s and subsided during Japan’s period of rapid economic growth.

More recently, the numbers of standing bars and patrons have been on the increase, as they are making a come back as Showa’s retro-style bars. “Antenna” shops opened as a strategic business move or as cheap eateries for people affected by the country’s long-lasting recession.

The skewer platter is a very popular item on the menu. The owner’s personal recommendation for pork skewers is to simply pair them with salt. Japanese customers who drink sake prefer the salt, but many foreigners order the chicken sauce.

Since opening its doors in 1953, Tonton has been operating at the same location amidst changing times for many businesses in the area. Today, Tonton provides customers with the same flavours that have been passed on over generations.

Tsukune is a Japanese chicken meatball most often cooked yakitori style (but it can also be fried or baked) and sometimes covered in a sweet soy or yakitori tare, which is often mistaken for teriyaki sauce.

This restaurant was established in 1946. Originally from the UK, Andy spent nearly half of his life in Japan before marrying one of the founder’s granddaughters and taking over the business from his father-in-law in 2010. He became the third proprietor of Shin Hinomoto.

Using his years of experience going to Tsukiji with his predecessor, Andy still goes to the fish market (now in Toyosu) to buy fresh fish.

The kitchen is home to a 74-year-old veteran sushi chef, who masterfully fillets fish and plates sashimi.

Izakaya “Shin Hinomoto” used to provide a simple lodging called “Hinomoto Repatriates’ Overnight Lodge,” where people arriving at the port from overseas after the end of the war could rest before heading back to the Tohoku region from Ueno Station. Today, Shin Hinomoto is staffed with some English-speaking employees and has English menus, making it a popular spot for Japanese and foreign customers alike, many of whom come with reservations (even on weekdays).

Shiseido Parlour opened in 1902 as the first soda fountain in Japan, making and selling soda water and ice cream (which was still rare at the time). In 1928, a full-fledged restaurant opened and it served as a pioneer of Western dishes and a symbol of the Ginza, providing tasty memories for numerous customers. Unchanging traditional flavours are blended with fresh contemporary features, a hallmark of the taste of the Ginza.

“Ice Cream” & “Ice Cream Soda”
The taste that people have loved through the ages: “Ice cream” and “ice cream soda”
The customers at the time were the geisha girls working in the Shimbashi geisha district. For each order of soda, the girls received a bottle of “Eudermine”(launched 1897) as a free gift. The soda was advertised as the ultimate thirst-quenching beverage, and was a huge hit, becoming a major attraction of the Ginza. The installation of the soda fountain led to a great increase in visitors to the pharmacy.

Meat Croquette
Einosuke Takaishi was the third chef de cuisine of Shiseido Parlour. The meat croquette created in 1931 by Takaishi remains a popular menu item to this day.

The secret to the creamy, melt-in-your-mouth consistency is the bechamel sauce used as a binding ingredient. Potatoes are not used. The ham and boiled veal are diced to give the croquettes a perfect texture when you bite into them. They are breaded, pan-fried, and, once they get a nice colour, placed in the oven where they are slowly cooked through. This is how you get croquettes that are crispy on the outside and gooey on the inside.

Meat croquettes are painstakingly prepared, staying true to European culinary techniques. At Shiseido Parlour, these “korokke” are called by their French name “croquettes,” as they are created from recipes designed to create scrumptious dishes that are distinctly western. You will feel the difference as you cut into one with a knife.

In 1895, Tsunetaro started a sukiyaki restaurant in Honjo. Since then, Ningyocho IMAHAN has stayed in business over a century with the mission of always providing the highest quality beef to its customers. Sukiyaki was very popular at the time and there were over 200 establishments in the area.

Chefs who are among the top five Iron Chefs in Japan select Ningyocho IMAHAN’s Japanese Black Wagyu as their choice of beef. Each cattle is carefully examined and hand-picked to receive the name “Ningyocho IMAHAN Black Wagyu” and provided to its customers as the company’s original brand beef.

“Ageing” of meat is a very important dressing process that determines the quality. Ageing is done in order to bring out the maximum flavour and tenderness that beef naturally has. Ningyocho IMAHAN uses its own unique beef dressing recipe full of techniques that the company developed over the years to bring out as much “texture,” “taste,” and “exquisiteness” as possible.