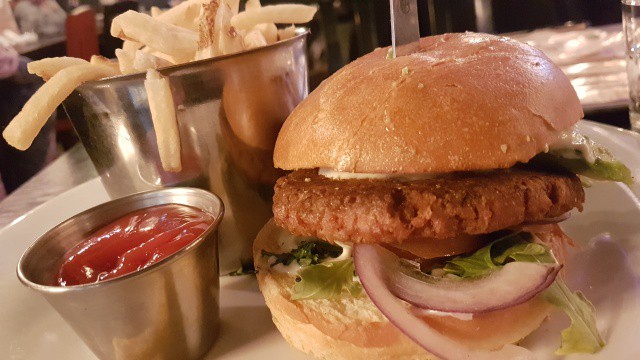 Just because you’re a vegetarian, doesn’t mean you can’t scarf down a burger! A veggie burger, that is.

Burgers have stood the test of time, and though beef burgers are considered more traditional, veggie burgers can be equally as succulent and delicious. Typically soy-based, veggie burger patties can be made from of a variety of ingredients – from beets, to beans, to a medley of rice and veggies, and more.

There are quite a few restaurants that have veggie burgers on the menu in Brampton, and of those few, there are some that make them better than others.

Here are the top five veggie burgers in Brampton:

In a hidden spot in a plaza at Maritime Ontario Blvd. on Airport, Onyxx is one of the best sports bars in Brampton. What Onyxx might lack in quantity of menu items, they make up for in quality and atmosphere. Several TVs hang around this bar, so it’s a great spot to catch a game, whether you’re seated at their expansive bar, in a cozy lounge area (the booths here can fit groups of ten or more), or at a simple table. Onyxx’s huge vegan burger is so unique because it’s topped with jackfruit, onion, coleslaw, BBQ sauce, arugula, avocado, and salsa. The jackfruit makes for a large chunk of the burger, and it’s worth a try. The fresh veggies with a kick of salsa and BBQ sauce gives the entire meal a very summery feel, great with a beer or a cocktail (or a mocktail)! This veggie burger is tangy and spicy with a touch of sweetness, and you’ll be glad to have gotten your veggies in such a tasty way.

Food Fight’s casual vibe at it’s location on Maritime Ontario Blvd. (it’s in the same plaza as Onyxx!) is perfectly suited to their menu – ribs, wings, burgers, and all of the epic cheat meals you can imagine. Amidst all of the meat, there are a few vegetarian options – there’s the mac and cheese, the fried pickles, and…a veggie burger! You can get this with or without cheese, and it comes with some lettuce and ketchup on top of the patty. The patty itself is soy-based but you can see that there are some mixed vegetables packed in, like corn. When you sink your teeth into the patty, you’ll notice a few things – it has a barbecue-esque smokey flavour built into it, it falls apart nice and easy, and it’s spiced properly. You’ll nom-nom-nom this right up. I highly recommend the onion rings as a side!

The Crown and Lion at Financial and Steeles is what I like to call my favourite pub in all of Brampton. The cozy, familiar vibe, dart boards, friendly staff, and epic menu (I’ve tried most of their menu now and everything tastes great so far) have made it my go-to for a casual drink or for a bite to eat. I’ll admit, their veggie burger had me confused…as soon as this was brought out, I wondered if my order was taken wrong! It looks like a beef burger and is flavoured like a beef burger – but it’s not! This succulent, thick, flavourful patty is soy-based with a mix of onions and spices, and the texture and flavour will have you craving another one. It’s well-seasoned with a kick of spice, and Crown has somehow managed to make it juicy. You can get this burger with or without cheese on top, and with sides like fries or a salad. Great if you’re looking for a casual, sit-down spot to grab a burger and a few pints!

There is something about the novelty of Sonny’s Drive-In on Kennedy Rd. that has helped this veggie burger inch its way near the top of this list. Don’t get me wrong – the soy-based and well-seasoned veggie burger is delicious. But the experience is a huge compliment. For vegetarians, it’s hard to go to a little vintage joint like this and find something on the menu that they can scarf down in their car in the parking lot, like all of the beef-eaters do. You can watch as it’s grilled to perfection, choose which veggies and condiments you want on top (there’s a variety, including lettuce, tomatoes, mayo, and even hot sauce which I loaded on here), and have it all wrapped to-go in tinfoil – such a classic experience. You’ll never be left out of a trip to a burger joint again if you choose to go here. And the best part? It’s super cheap. For under $5, you can get this really tasty veggie burger and eat it how burgers should be eaten…straight off the grill and into your stomach in the parking lot.

Ah, J. Red & Co, where the entire menu has found its way into Brampton’s heart thanks to celebrity chef Jason Rosso, the mastermind behind the restaurant. Let me tell you – their veggie burger is no different! This masterpiece takes the title for best veggie burger in Brampton, hands down, and I can’t wait to go back for another one. The Better than Meat Beet Burger is a scrumptious beet based burger with arugula, tomato, onion, avocado, garlic aioli and goat cheese. When you bite into this, you’ll notice the texture of the patty, which has a slight crunch to it but it’s also thick and tender, the creaminess of the goat cheese and the avocado which give the entire meal a little sweetness, and honestly, you’ll feel yourself salivating, excited for the next bite. Something really fun about this burger is the fact that it’s kind of messy, with the avocado oozing from the back as you take a bite, making it an extremely satisfying burger experience. That, and there’s even a large knife stuck in the middle of it so you can cut it down to be more manageable. Be warned that this burger is filling – for those hungry people seeking an epic veggie burger, only!