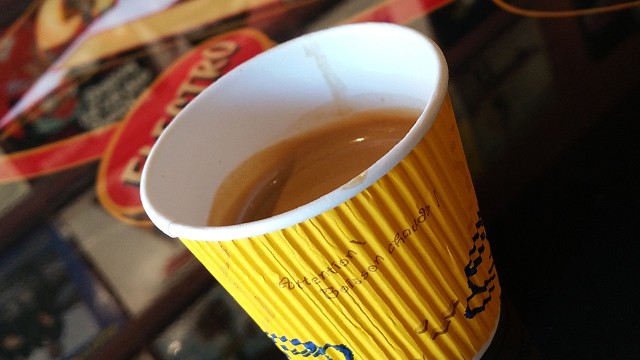 Mississauga is home to a number of fairly new indie cafes and a few long standing ones that offer a cozy place for some great coffee-based beverages, café-style eats with a little healthy juice and Wi-Fi. This diverse list includes Mississauga’s Top 5 cafes, each offering its patrons something truly unique.

Buka Maranga Cafe and Catering (also known as Buka’s) is a Sauga gem that has been around for over 20 years. It’s located along Erin Mills Pkwy in the Meadowvale neighbourhood bordering Streetsville. The fairly large space can seat at least 20 people and has a rustic feel with natural wood finishes, burlap finished tabletops, metal chairs and large garage door windows that they open during the summer months. Their specialties include coffee and house-made bagels that come in ten different flavours, including whole wheat, plain, sesame seed, the works, cinnamon raisin, poppy seed, pumpernickel, blueberry, cheddar and herb and chocolate chip. They also make eight varieties of cream cheese in-house. They also boast a breakfast menu, sandwiches, soups and a selection of desserts, including brownies, cakes, tarts and muffins. There is a great selection of specialty beverages from coffee-based cappuccinos, lattes and mochaccinos to chai lattes (there’s even a Snickers latte on the menu), flavoured hot chocolate, milk steamers, hot apple cider and organic teas. The cold coffee selection includes cold frappes (as they call it), fruit smoothies and Italian soda. You can pick up a baker’s dozen plus two tubs of cream cheese on Bagel Tuesdays. 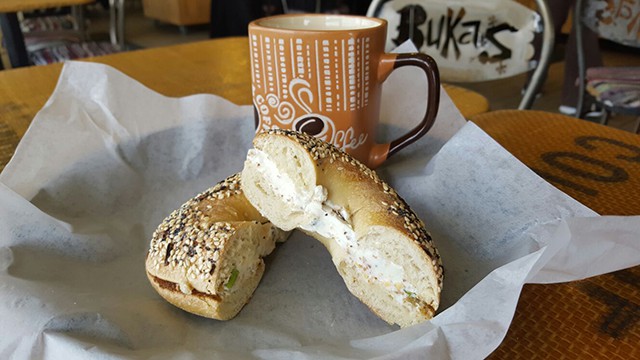 Port Credit’s Archetop Café caters to coffee, food and music lovers and is the first of its kind in Mississauga. They offer coffee, food and vinyl (old and new). Their tagline is ‘food, brew and songs’ and the cozy two-level space has a warm vibe and a summertime patio. The top level is home to new records and the nook in the basement features a large selection of used vinyl, CDs and DVDs (including music and collectible movie and TV series sets such as Cheers and the Batman TV series from 1960s). You will find a unique selection of hot coffee and tea beverages, including a number delicious creations like the Espresso Ice Cream which includes a shot of espresso topped with real soft-serve ice cream and Red Espresso ® – an 100 per cent naturally caffeine-free rooibos tea espresso for those who don’t drink coffee (and it offers five times more antioxidants than green tea). The drink menu also includes their signature blends of fair-trade coffees originating from Central America, Tanzania, Peru, Brazil, Mexico, Honduras and Bolivia that are specially roasted for Archtop every week. You will also find espresso-based drinks, including one of their signature drinks called Nutella Cappuccino and specialty hot drinks (chai latte, Irish jig, London fog, red velvet latte and others), 24 varieties of fair-trade loose leaf teas and milkshakes. All of the sandwiches are made fresh daily in-house using all-natural ingredients, and the pastries are made fresh and delivered daily. You will also find breakfast bagels, soups and salads.

Port 1 Cafe & Gelateria is Mississauga’s only artisan gelateria located in Port Credit. They make their ice cream on the premises and also offer a small, high-quality selection of freshly made sandwiches such as grilled Montreal smoked meat, roast beef or chicken (using bread from a local bakery), made-to-order personal sized pizzas, soup, empanadas/meat pies (from a local bakery) and Dufflet’s pastries. Port 1’s operators pride themselves on making their gelato and sorbettos (dairy-free) in-house and in small batches using all-natural ingredients imported from Italy. Some of their most popular gelato and sorbetto flavours include lemon, salted peanut, chocolate and red velvet. They offer a rotating selection of 30 flavours and frequently introduce new ones throughout the year. Also on the menu are made-to-order shakes and smoothies (using fresh fruits with a choice of milk or juice, added protein or espresso shot), coffee-based drinks, teas and tea lattes. They offer a comfortable indoor atmosphere and patio and house a collection of beautiful artwork by a local community group called The Guilty Artists of Port Credit, which rotates periodically. They also feature musical talent and offer their space to special interest groups. They host chocolate making sessions and barista training workshops. Port 1 is just under two years old, so while it doesn’t have the nostalgic feel that some of Mississauga’s ice cream shops offer, it wins out for offering fresh, high-quality homemade ice cream. For the nostalgic factor, try their vanilla and blood orange gelato together – it took me on a trip down memory lane of eating Creamsicles as a kid. 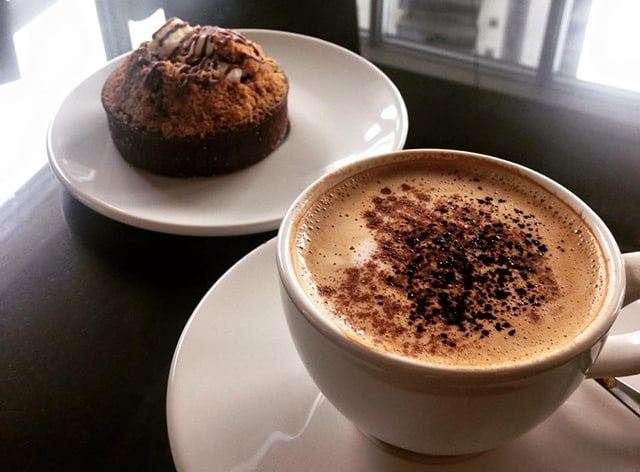 Studio 89 is considered a community hub. You might think of it as a standard cafe, but it’s a cafe with a mission and it’s a non-profit organization where the money you spend goes towards the functioning of the hub. When you purchase something, they simply say “thanks for the donation.” The comforting and fairly large space has two levels and a wide selection of board games and a calendar of events that includes board game nights, guest speakers, paint nights, dance classes and more. The menu is comprised of ethically-sourced and produced products. The coffee is not only fair trade, but bird-friendly, organic and rainforest-certified and their baked goods include vegan, gluten-free, dairy-free and egg-free options. Here is how they define Studio 89: “See we’re what is technically called a social enterprise. This is how it works. Our youth led non-profit organization YTGA has been empowering and mobilizing young people for social justice through campaigns, workshops and the arts since 2006. Through the cafe business we are able to run much more programming for many more young people! That’s right, you spend money on good ethical and healthy stuff and it goes towards more good community stuff!” 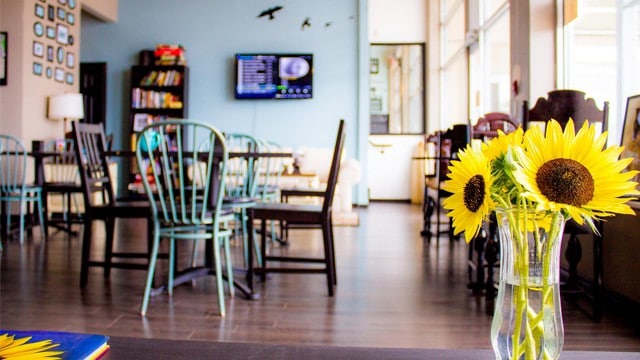 The Cold Pressery dishes out healthy food and bevies that are made in-house and are high on the flavour profile. Although their specialty is fresh organic cold-pressed (raw) juice, they offer so much more. The menu includes a selection of organic cold pressed juices and smoothies with fun and catchy names like Juicy Fruit, Orange Uglad and Hulk’s Favorite. They also offer healthy snack options, including avocado smashed toast and acai bowls that are filled with bananas, mangoes, coconut shavings and granola. Vegan pies, Danishes and cookies are also on the menu and everything is vegan and dairy-free. They also make cold pressed organic almond and cashew milk and cold pressed coffee. The duo behind the concept are progressive in their creations and continuously add new items to their menu, such as their vanilla chai seed pudding (velvety vanilla chia seed pudding sweetened with raw agave, coconut milk & cinnamon and topped with granola & seasonal fruits) and seasonal offerings like their new list of hearty soups and seasonal pies such as pumpkin pie. One of my favorite dishes is the chipotle bean taco (a blend of beans, onions, mushrooms, celery, corn, chipotle pepper & smoked paprika on a spread of fresh avocado – garnished with diced tomatoes, coriander, purple cabbage & drizzled with chipotle sauce with a choice of three hard or soft corn tortillas). I know it sounds super-healthy and a bean taco seems somewhat underwhelming, but don’t knock it until you try it because this vegetarian taco packs a flavourful punch and it’s hearty, so you will be satisfied. The space seats 26 and is adorned with wood elements and chalkboard walls. The main wall is a mural of Mississauga landmarks, including Square One, the Marilyn Monroe condos, City Hall and Sheridan College. It was created in-house and took about two and a half weeks to complete. 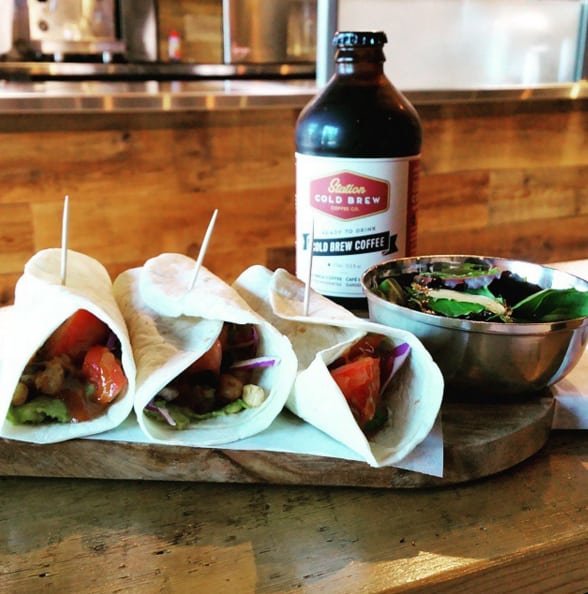