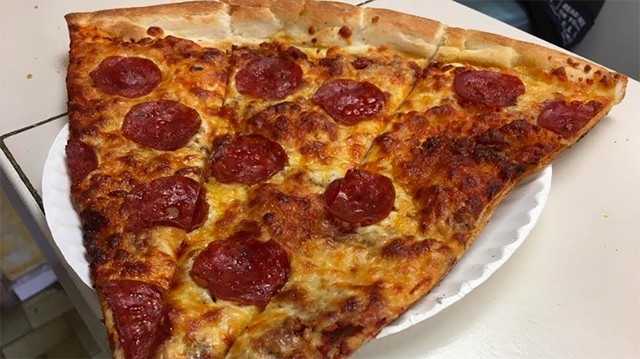 So I’m fairly new to insauga.com and one thing I’ve realized is my colleagues have been to just about every place in the city to write about our awesomely eclectic food scene. When a friend sends a text requesting a restaurant reco, I’ll usually respond by telling them to search for it on insauga. But now all I have to do is message Khaled or Ashley and an array of answers appear within seconds. It’s some sort of magical access to the top foodies in the city. Therefore, it brings me great joy to tell you there are places I know of which they aren’t familiar with (thanks to my siblings, who consistently uncover the best underground places). Keep in mind, all of these are on-the-go spots – ’cause ain’t nobody got time to sit down and eat in a civilized manner these days – so don’t judge me for eating out of a paper bag in the car while typing! Here goes … my top five best-kept secrets in Mississauga.

This one-stop Indian shop offers everything needed for a browntown fam jam, from coriander to barfi to basmati rice to lime pickle. While the produce section could offer more, considering the name of the place, its convenient location at the southwest corner of 5 & 10 (near the RBC) draws people who aren’t necessarily looking for South Asian groceries but rather a quick snack. If you head to the checkout area you’ll find those amazing A-One samosas, saving you from trekking across town to Tranmere Dr. near Pearson airport. There’s a variety of fried goodies made locally by a Gujarati aunty — dal vadas, dabelis (classic Indian street food!), and homemade rotis. I’m not into things with a spongy texture (aside from sponges to scrub the bathroom sink) but my sister loves dhoklas, which are steamed (for those who are health-conscious). Most items are under $2 each … you’re welcome! 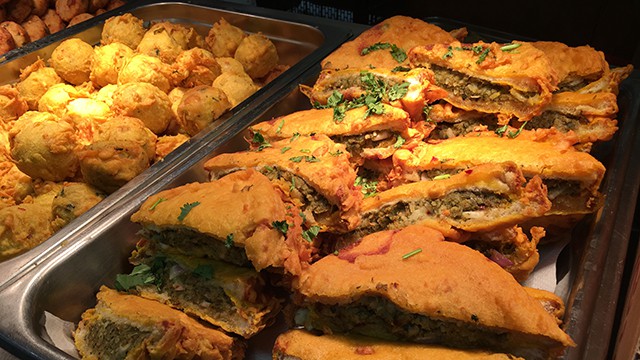 My brother eats a strictly plant-based (let’s use the v-word: vegan) diet and put me onto this Malton strip mall joint along Airport Rd., just north of Derry Rd. It’s 100 per cent vegetarian and offers a twist on the usual fare … call it yummy vegan Indian junk food. I started with a mango shake (in place of a classic mango lassi) made with soy milk instead of yogurt. It was delicious. Then I tried the kalga dalla, which is meant to simulate chicken with a similar taste and appearance. It’s made from soy and veggies and reminds me of a corn dog (which immediately brings to mind memories of being a kid in Montreal and running to the basement at my uncle’s house to get a box of Pogo Sticks from the freezer then running back outside to play until someone yelled for us to come in for lunch). It was coated in a barbecue-type sauce and gave me a surprisingly meaty satisfaction. The panzerotti is tasty, too — try it with sundried tomatoes, spinach, and pineapple. Veggie Flames also has a juice bar, offers dairy-free cookies-and-cream shakes (as well as Indian coffee and chai) and makes pizza with Daiya cheese. Grab your grub then hit the road!

Must-try: Mean and chips (it’s a substitute for fish) 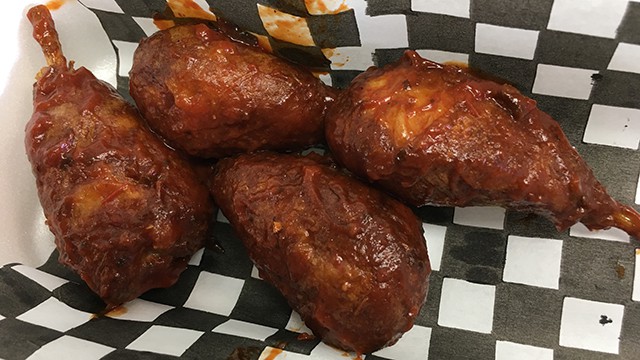 You may recognize the name from Union Station — this pop-up shop is hard to find but once you do, it’s worth it. The kiosk is in the east tower lobby of the Sussex Centre at 50 Burnhamthorpe Rd. W. (in the building with Remax and car rental places). It’s at the corner of Sussex and Enfield, across from the Novotel’s Trio patio. Everything they serve is locally sourced from the Greater Toronto Area, such as Detour coffee from Burlington (the cafe is in Hamilton). A hot cup of dark roast reminds me of south Indian coffee … in other words, it’s wonderful. Railroad is one of the few places vegans and/or gluten-free folks can count on nabbing a light-yet-filling lunch or snack. You’ll find a few selections of FoodBenders salads, such as sweet potato black bean (the almond Thai chickpea salad is my favourite, with red cabbage, bamboo shoots, pumpkin seeds, carrots, etc.) and a broccoli kale caesar bowl. For those who love them some dairy, baked goods, including scones, are made from scratch via Toronto’s Circles and Squares Bakery. The almond croissant is to die for! It’s fresh, flavourful, and filled with an almond-sugar-butter concoction. Then there are the muffins, which are some of the tastiest I’ve ever had (blueberry rules!). This place brings a metro Toronto vibe to downtown Mississauga. Speaking of which … for those who partied too hard or simply overindulged, here’s a hack: they sell Vibe Kombucha in original ginger and pear ginger. 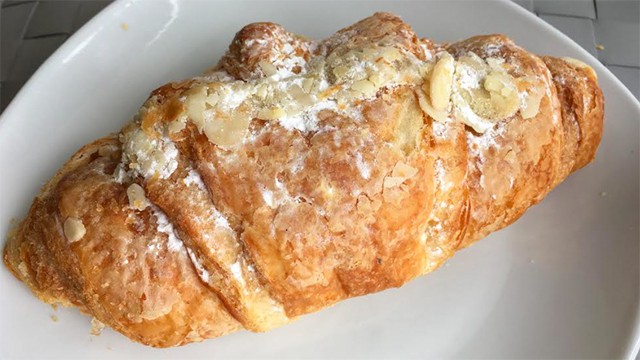 This is the go-to dessert place for South Asian vegetarians since Makkar specializes in eggless cakes. (It’s also next to Veggie Flames in Malton, so check out both one time!). This 100 per cent vegetarian bakery offers custom cakes, assorted sandwiches, and snacks. With more and more people opting to go meatless and/or plant-based, this bakery – where everything is made in-house – is a must-try despite its limited selection. Looking for a carb fix? The potato patty costs $1.50 and will curb any and all cravings you’re having. It’s essentially a puff pastry stuffed with lightly spiced potatoes. I bought one then drove back the next day for more. Then I tried a box of ajwain cookies (ajwain is a savoury carom seed, similar to cumin) and nearly finished them in one sitting. The bakery sells individual vegan treats — I had a slice of vanilla mango cake and a chocolate cupcake. The cake was fantastic! Then there are vegetarian cake slices which have fresh whipping cream. I love, love, love the pineapple cake. The pistachio cake is also worth swooning over. All three cakes I sampled were light, fluffy, and clearly made with real ingredients. While the custom cakes seem a tad outdated in terms of aesthetics, I’m willing to put that aside and will be heading back to Malton the next time I want to impress someone with a unique celebratory treat because you shouldn’t judge a cake by its icing. 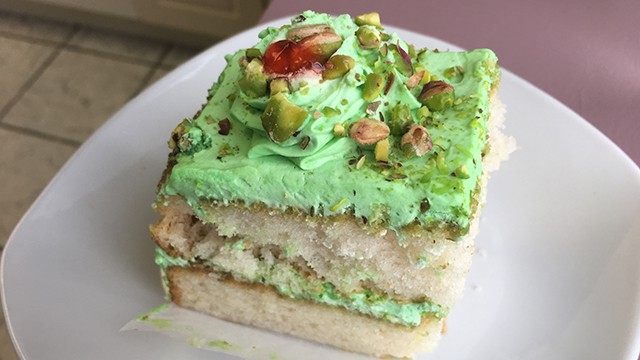 I came up with this one all by myself. This tiny pizza joint opened in Meadowvale in 1993 — back when the Blue Jays were champs and Cross Colours were super fly and Janet Jackson posed for that epic topless Rolling Stones cover and Saved by the Bell wrapped up and my burgundy plaid babydoll dress was the greatest thing on Earth. It’s in a residential plaza off of Winston Churchill Blvd. (just north of Britannia Rd.) at the corner of Tours Rd. and Windwood Dr. Upon returning to this pizza place for the first time in 15+ years, I’m taken aback by how phenomenal this pizza is and how I took it for granted back in the day since it was so close to home and made for an ordinary Tuesday dinner. But it’s really anything but standard. The owner, Jose, brings his Sicilian roots to life with this dough. Everything is made by hand. Massive pepperoni slices – 12 inches to be exact – cost $4.50 (mine was cut into three). Despite rising food costs, he hasn’t changed the enormous portion. You bite into the slice and taste fresh tomatoes and incredible cheese and pepperoni and that thin-crust … it’s exquisite. And you have to try the creamy garlic sauce, made in-house. (I’m partial to the spicy version). Jose suggests refrigerating any leftover sauce for up to a month and using it to make alfredo pasta. Keep in mind, this isn’t a lunchtime option. The tiny shop opens at 4 p.m. or 5 p.m. – and people drive from Oakville, Burlington, and Toronto for Michaelangelo’s pizza – so it’s about time the rest of Mississauga knows what’s in their own backyard. Grab some on your way home already!