Top 5 Under the Radar AYCE Sushi in Mississauga 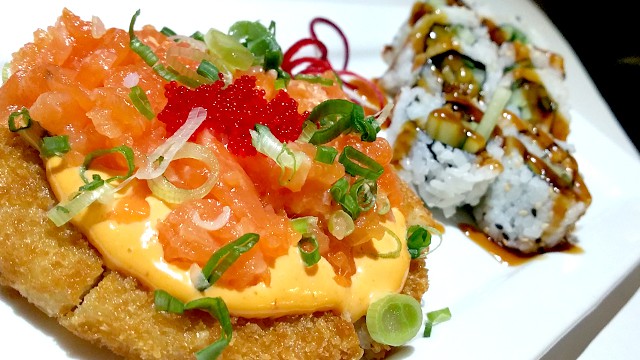 Mississauga has a plethora of AYCE sushi joints, but a few gems have somehow managed to fly under the radar. Some of these places are a little more Spartan in nature, so don’t expect an iPad ordering system or top notch interior decorating (some look more like truck stops than chic Japanese joints). That said, the food you get is just as good as that served at some of the city’s most popular AYCE restos.

Pro tip: Since you’ll be writing your order down rather than placing it electronically, take a picture of the paper on your phone. Trust me. It’ll come in handy if you have to check what you ordered in the event that you think something has been missed and you can’t quite remember what.

If any one of these places needs Restaurant Takeover to come help them out, it’s this one. Located in the Clarkson-Lorne Park area, Orange Fish is reliably tasty. Unfortunately, this AYCE sushi joint boasts furniture that looks like it was taken from a bankrupt Coffee Time. Outside of the interior, the food was actually good and came fast — especially considering there was one guy taking my order and making it. We went at an odd time. The food was flavourful and I would definitely go back. If you live in or around City Centre, this is the closest AYCE sushi joint to your house or condo. This Grand Park Plaza resto opened a few years back under its current name and the revamp was a vast improvement. Saki offers several small, closed-off rooms that come equipped with buttons to flag down servers (which I always find weird, but whatever) and open tables for smaller parties. The AYCE sushi is delicious. KK Sushi is located on Dixie Road in a plaza that is heavy on the Middle Eastern and Indian/Pakistani restaurants. Hence, KK has tons of halal options on their AYCE menu. Their interior is actually the nicest out of the top five and the food was nicely plated and the fish was fresh. Make sure you take a picture of your order, as we had MIA items. Once we showed the server what we ordered, the issue was cleared up in a jiffy! Located just north of Clarkson in a strip plaza north of the QEW on Erin Mills Parkway is a relatively new AYCE resto called Moon Sushi. The resto is deceptively cozy and looks a little grander from the outside, but who cares as long as you get a seat. They boast an old school pen and paper ordering system and standout service, and service in an all-you-can-eat system is key when you want to wolf down as much sushi and tempura as possible while receiving accurate orders. The food is very flavourful and delicious as well. This is one of the best hidden gems in Mississauga for both AYCE and a la carte dishes. Kanda Sushi is located by Trillium, so you will notice that a lot of people from the hospital frequent this joint. The interior suggests the resto might have been a night club at one point, with a sunken middle section that’s unusual in most restaurants. The food and the presentation of the food is always on point. The sushi is always fresh, the shrimp tempura is always crispy and the sashimi, served on lighted ice, is fantastic. In terms of vegetarian options, they offer a ton of meatless rolls — more than most AYCE sushi places, to say the least. Top 5 All You Can Eat Sushi Joints in Mississauga

In Mississauga gone are the days of production line sushi, uninspired plating of sashimi and soya sauce stained paper menu check box items for all you can eat sushi.
Read more