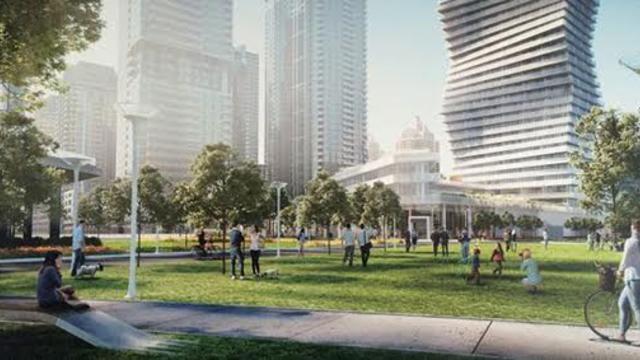 For those who are unaware, Rogers is set to build a massive condo community in Mississauga called M City. The development will consist of 10 residential towers with land set aside for a public park. The lower base of the buildings is being set aside for commercial usage. I opined that perhaps we could build a commercial tower on the land since we have not had much new commercial office space in City Centre for up to 20 years now. But as Mayor Bonnie Crombie said in her remarks at the groundbreaking ceremony several weeks ago:

“These new planned developments by Rogers are consistent with the City of Mississauga’s commitment to build a livable, walkable city, home to mixed-use residential and commercial developments that are connected to an extensive public transit network.”

Rogers will partner with a construction management company and a highrise builder on the project, which Ward 7 Councillor Nando Iannicca said will be a defining feature of Canada’s sixth-largest city. The towers will house privately owned condos and rentals and boast a wide variety of leased commercial properties on the lower floors. Also, the land is already zoned for mixed-use (apparently it’s too late to rezone the land at this point), so you literally cannot have just a stand-alone commercial office building on the land.

So, what should occupy that substantial commercial space?

Here are some nifty suggestions:

This new community (it’s almost a city within the city, if you will) is going to need a place for people to get some groceries. There is the T&T a few blocks away, but if that is the only option, that T&T might get a little crowded. With all that ample commercial space at the building bases, there could be room for another Fresh Co., Longos, Metro, Loblaws Superstore, or even another Whole Foods or other boutique grocery store (such as an organic market or a Pusateri’s). The Absolute Towers have a Town and Country Market, so that’s one idea for a food store option that’s different from the big name brands.

A lot of millennials, young couples and young professionals would definitely be attracted to a store like this. The closest place I know of for computer needs is the Staples across the street on Grand Park Drive, or the Canada Computers along Burnhamthorpe Road. But would it not be nice to have something at ground level, so that instead of lugging their computer out and driving over to a shop, residents could just head downstairs to get it fixed?

When you look at where this property is situated, there aren’t a lot of options in terms of food. The strip mall along Grand Park Drive on the west side has a Pizza Pizza, Kelsey’s, a Japanese and a pho restaurant. And then on the other side of the land, you have Alioli Ristorante, which is one high class restaurant, and then Spring Rolls and some other restaurants at the Sussex Centre. My point is without some nice restaurants at the base of these condos, one would have to walk to Square One to try some of the high-end stuff they just opened there. M City could definitely use some fine dining or unique restaurants at their base to attract visitors and cater to the residents living upstairs.

Even though a vast amount of new shopping options recently arrived at nearby Square One (Simons, Holt Renfrew, etc.), those are still large brand names and while they’re are popular, it would be nice to see some smaller local shops set up in the available commercial space. I would love to see some of the smaller local boutique establishments that I see in Streetsville or Port Credit find a home in Mississauga’s downtown.

We could all use something to relax after a long day at work (or whatever it is we are doing). There aren’t many yoga studios in this area beyond the great but often-crowded Moksha Yoga on Confederation, so why not? As it stands, Moksha is overflowing with yogis looking to practice after work, so it’ll be great to give residents–especially since there will be more of them when M City is built–a few more local yoga options.

Here’s what we probably don’t need more of in the near future on this property:

I’m assuming that these condos will be equipped with their own gyms or even swimming pools. Why would you want to pay for a gym membership if there already is one in your condo and you’re paying for it through your condo fees? Besides, if using your building’s gym isn’t your style, there’s always the YMCA right across the street and it’s more affordable than other gyms that try to sucker you into training programs for hundreds of dollars.

Okay, maybe at least one (people do need to go somewhere if that cough is getting serious!). But still, the proliferation of walk-in clinics and medical centres around City Centre has been well documented by Insauga before. Hopefully the people who move in don’t get so sick of their new place already that a vast number of medical centres/walk-in clinics would be required to alleviate the stress!