Top 5 Things Mississauga Should Have Done Decades Ago 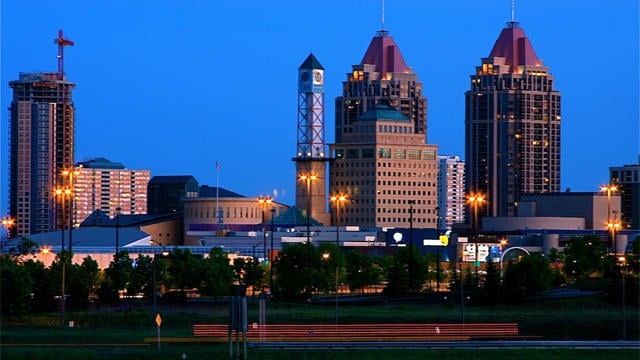 Over the past few years, Mississauga has grown exponentially and proposed (and tackled) a number of ambitious (and necessary) projects related to transit, development and recreation. This week, the city hosted a media breakfast and welcomed journalists to come and ask questions about the city’s 2017 budget.

As far as the budget goes, the outlook is relatively bright. The city isn’t proposing any service cuts (a sign of robust finances) and is increasing property taxes 1.98 per cent (Peel is also increasing them by one per cent, so residents will see an overall tax impact of 2.98 per cent) to help fund transit projects, maintain infrastructure and boost the arts and culture scene.

At this juncture, it does not appear that specific funds have been put aside for such projects as Dundas Connects, Vision Cooksville and Downtown 21 because it’s simply too early.

While it seems the city is taking a measured approach to change, it’s interesting to look back at the city’s development over the years and examine what projects/initiatives should have been tackled earlier.

Here are five things Mississauga might have benefitted from having earlier (or at all).

Technically, City Centre is Mississauga’s downtown–but is that truly our “downtown” in terms of entertainment and walkability? Official definitions aside, the term “downtown” conjures up images of street parking (ample street parking, not a smattering of spots here and there), independent shops and restaurants and walkability. While it’s not necessarily easy to make your way from one end of a big city’s hub to the other on foot, the idea shouldn’t seem preposterous. While City Centre has a lot to offer (Square One, condos, Whole Foods, the LCBO, etc.), it’s not as downtown-y as, say, Streetsville or Port Credit. Other Toronto satellite cities such as Brampton and Oakville have bona fide and distinct downtown cores that are a truly different beast from the rest of the neighbourhoods.

According to the city’s Downtown 21 Master Plan document (which you can view for yourselves here), the McLaughlin Group came up with a vision for the Square One area that involved elevated walkways and scenic green spaces. They imagined, I think, an urbanesque mini-city in the center of the yet-to-sprawl suburb. A place for cars and people — not just people in cars. Obviously, their vision never quite materialized and, over 40 years later, people are wondering how to resurrect the dream and actually turn the City Centre into a legitimate urban space. The Downtown 21 plan is a good start, but there hasn’t been much talk of an official starting date (although the project was mentioned at the recent budget event, so it hasn’t been forgotten).

Perhaps, if the city had kept to its original vision for the area, it would have a better downtown feel and we wouldn’t be contemplating such monumental change after residents have become so reliant on cars and one standalone mall.

Although the Hurontario LRT is controversial, it makes sense. The city is in desperate need of higher order transit and the LRT will help Mississauga better grapple with its expected population growth by providing an option that’s not a bus. While we’re not about to slam the LRT, we acknowledge that it would have been nice to have had a different form of higher-order transit (perhaps a subway) early in the game.

About two decades ago, Toronto actually had a plan to potentially extend the subway west to Mississauga. As late as 2014, City Councillor Carolyn Parrish said the city deserves a subway more than an LRT and mentioned that the city actually rejected a subway offer many years ago.

While some would argue the city simply doesn’t have the population to justify a subway link between Kipling Station and Square One, an editorialist for insauga.com recently suggested that that argument doesn’t fly when you consider the fact that Vaughan is getting a subway extension.

The LRT is a good idea, but it’s interesting to imagine a city with a subway connection. It’s too bad that we seem to have missed out on a good opportunity.

3) A Robust Arts and Culture Scene

The suburbs are not known for vibrant art scenes, but that doesn’t mean smaller cities don’t boast engaging art and talented artists.

During the 2014 mayoral debate on arts and culture, candidates agreed that the challenges facing the city’s art scene are a lack of exposure, a lack of knowledge among residents about the city’s artistic and heritage hotspots and a lack of world or even province-wide attention. Mayor Bonnie Crombie actually proposed creative spaces, public art, festivals and an archive.

At the recent budget meeting, city officials said that increased investments into arts and culture have been laid out in the 2017 budget. In a corporate report, the city writes, “Overall, trends show an increased demand for city support for artists and community arts groups. This is most evident in the increasing demand for Culture’s grant programs. Demand has exceeded the current funding envelope for the past two years…More and more, municipalities are using grants to attract programming that fills service gaps. Looking ahead, staff will need to determine how grant funding can be improved to better support the arts and culture community to diversify cultural offerings, improve quality of programs, improve access to more groups and support groups that provide alternative services. Staff research and feedback from the arts community also shows the need for more cultural spaces by using and repurposing existing facilities.”

It’s incredibly encouraging that the city is acting now to become a bigger and better hub for art and artists, but it might have benefitted the city to focus on arts and culture early. Smaller cities like Stratford and Hamilton boast exceptional arts scenes, so there’s certainly nothing barring small or more suburban municipalities from investing in profound and recognizable artist people and endeavours.

Again, the city is addressing this now by moving MiWay towards a grid design to allow for more frequent buses down the city’s main corridors http://www.mississauga.ca/portal/miway/miwayfive. The LRT will also–derided though it may be by some–help connect Mississauga’s disparate neighbourhoods.

For many years, residents have focused on the need for more east/west transit options (it’s the main thing that drives the push for a subway connection) to provide easier access to Toronto. While a subway would be a boon, there is absolutely a need for north/south transport and, furthermore, it’s necessary to better connect neighbourhoods within Mississauga.

Case in point, it can take up to 30 minutes to drive from Meadowvale to Lorne Park and the travel time has nothing to do with congestion–the neighbourhoods are simply far apart in a geographically vast area. Since the city is large, it makes sense that people will want to travel from, say, Port Credit to City Centre and City Centre to Streetsville. A strong transit network that provides more direct transportation from one neighbourhood to another is necessary and, although the city is working on inter-city transport now, it’s interesting to think of how things might have looked if transit was prioritized early on.

Again, this is being worked on now https://www.insauga.com/massive-waterfront-conservation-area-coming-to-mississauga (and that’s a great thing). For years, Mississauga has been home to an exceedingly ho-hum waterfront with endless potential. That potential, it seems, is being explored in earnest now. The Lakeview Waterfront Conservation Project might take seven to 10 years to complete. When it is complete, the space is expected to include a publicly accessible conservation area the size of 48 football fields, with 1.5 km of new shoreline stretching from the old Lakeview generating station to Marie Curtis Park.

A vast waterfront is an enormous asset, so it would have been nice to see the city make use of it early on. As of now, the pockets of lakefront land that is available for use is incredibly scenic and beautiful.

It’s exciting that the city is moving forward on an ambitious waterfront project, but since the official opening is potentially a decade away, it would have been nice if we’d all gotten too enjoy it sooner.