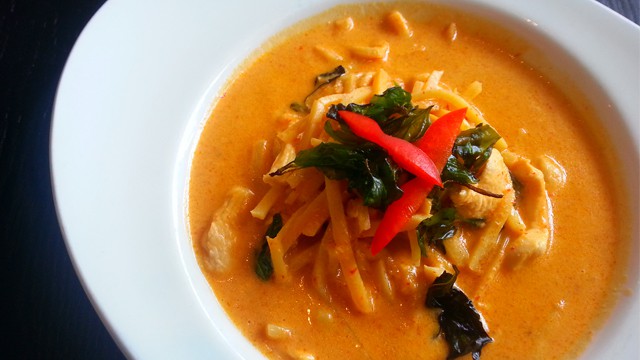 Thailand’s cuisine is internationally known for its aromatic and exotic expression of Thai culture presented on a plate. Thai food boasts a complex layer of flavours that carefully combine spicy, sour, salty, sweet and bitter notes into a harmonious oral sensation, making it on to my top five favorite cuisine list.

Here are the top five Thai restaurants in Mississauga.

Twin Fish is located in the Courtney Park entertainment complex bordering Brampton along Hurontario. The restaurant feels expansive with its tall ceilings and simple yet elegant design with a white, off-white and brown colour scheme. The lunch crowd on this particular weekday was predominantly local business professionals from offices in the surrounding area.

The service was pleasant and there is a generous selection of dishes on the menu including lamb and red snapper — which aren’t commonly found on Thai menus in Mississauga.

I tried the Thai smoked shrimp paste fried rice as well as the Thai red curry chicken. The shrimp paste fried rice included an abundant amount of shrimp, crab cakes, squid, mussels, green onions, egg and was sautéed in a garlic and smoked shrimp paste. The flavours were intense and the portion more than enough to feed two people. I also ordered the Thai red curry chicken made with pineapples, kaffir lime leaves and coconut milk and topped with some basil. The dish had a generous amount of chicken and the curry was smooth and moderately spiced. The pineapple is a nice addition to the curry that cuts through the creaminess and spiciness of dish, making this red curry one of my favorites. 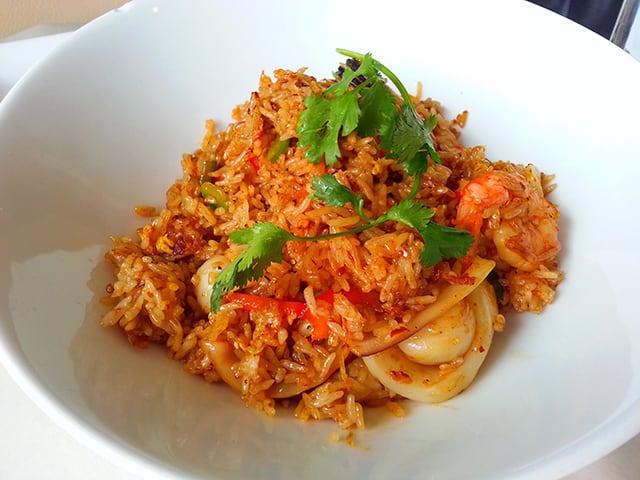 Thai Signature is located in Port Credit amidst the majority of Thai restaurants in Mississauga. You can find it in a small plaza off of Lakeshore Rd. east of Hurontario with free parking.

The restaurant has been serving diners for over seven years and the inside is designed in true Thai fashion with Thai art, accents and fabrics lining the walls. There are also a few fake banana trees, which sounds tacky but it works. There is elevator jazz playing on the speakers and linen lined tables.

I tried both the Thai style pad Thai (in Tamarind sauce) and chicken in a cashew nut sauce. I found it interesting that there are two versions of pad Thai available on the menu, likely to cater to palates that perhaps aren’t accustomed to Thai flavours. The cashew chicken is made with garlic, cashews, orange, pineapple, carrot, onion and sweet pepper and the base is shrimp paste. If you haven’t tried shrimp paste before, it has an extremely salty and pungent seafood flavour and a little goes a long way. When incorporated into a dish with fruits, such as the cashew nut chicken, it balances quite nicely. 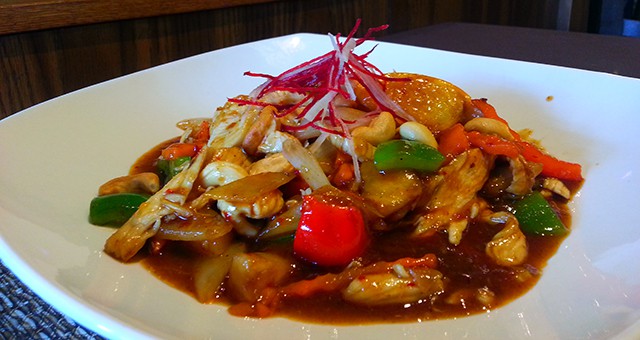 Jing Thai is a family-owned business and has been a Streetsville gem since 2004 and it rolls in at number three on our top five. The word jing in Thai means “true,” making the literal translation of the resto name “True Thai”.

The restaurant is a quaint, white-linen table cloth establishment without the fine dining prices. The restaurant apparently seats 60, but it doesn’t seem like it because of the layout. The street side portion of the restaurant is a small area lined with windows that gets filtered sunlight shining through in the afternoon.

I ordered the red curry chicken. The dish comes in a red curry coconut sauce with carrots, broccoli and green bean. The flavour was good and the chicken serving generous. I also tried the pad Thai beef, which I couldn’t stop eating. The flavour was balanced and not overly acidic and it was served with bean sprouts, tofu, green onions and topped with crushed peanuts. 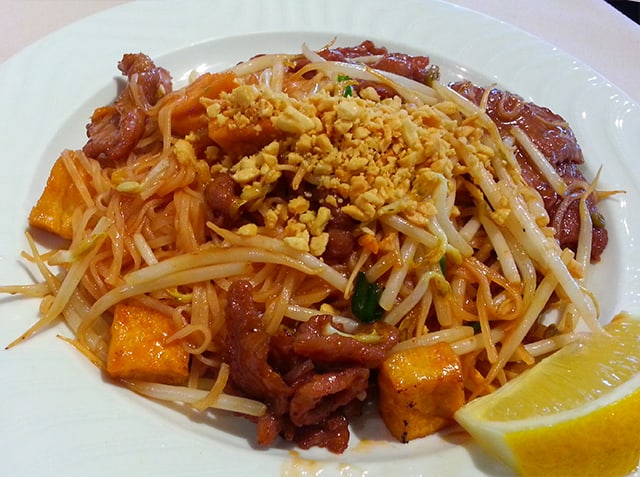 At the number two spot, Thai House Cuisine 2 takes the title for best atmosphere and a tie for best service. The exterior of the restaurant screams lunch specials for $9.99 written in bright green and all caps against yellow signage. I presume the name (written in the same vibrant colours) of the restaurant suggests this is the second of their three locations.

I would have never expected to enter a thoughtfully decorated interior that immediately induced a sense of serenity. The colours are a warm combination of earth tones and soft yellow with hints of neutral shades that all blend well together. The restaurant is adorned with beautiful authentic Thai pieces like Buddha statues and a large beautiful art piece of Thai Zodiac signs. There is soft music playing in the background and the tables are all set.

The menu has a good selection of Thai dishes, including duck. Duck isn’t as usual to find on a Thai resto menu, but it is common dish in the northern region of Thailand where I was told the chef is from. I tried the pineapple fried rice and the chicken red curry. The pineapple fried rice was comprised of a number of ingredients and was a meal in itself. It was supposed to have been served in a hallowed out pineapple, but I was informed the kitchen had run out and was instead given an extra serving of said fruit. The chicken red curry was creamy and mildly spicy and served with a decent portion of chicken, sliced bamboo shoots, red pepper and a basil leaf garnish. Overall, the food is tasty and the serene setting is perfect for a date. 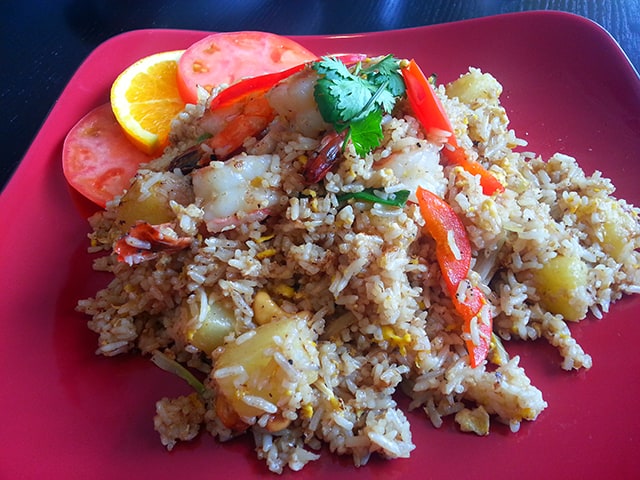 The menu is simply laid out and organized into categories and offers chicken, beef, shrimp, chicken and shrimp, seafood, or vegetable and tofu as the protein for each dish. The Thai names of the dishes are also listed on the menu.

I ordered the basil eggplant (Ma Keau) beef and southern Thai curry (Massaman) chicken. The Ma Keau was a vibrant array of colours and textures in a sauce that was bursting with flavour. The dish includes bell pepper, carrot, green beans, peppercorn, green and white onion, baby corn, basil and sautéed eggplant. The vegetables were perfectly cooked, the beans nice and crisp and the eggplant had a slight firmness that ensured it held its shape. The Massaman is a new item on the menu and stems from the southern region of Thailand. It consists of chicken, carrot, tomato, white onion, potato and is topped with crushed peanuts and green onions and covered in a coconut and peanut curry sauce. The dish had depth in its flavour and was very rich and creamy with a mild kick. The side of coconut rice sopped up all the delicious sauce. 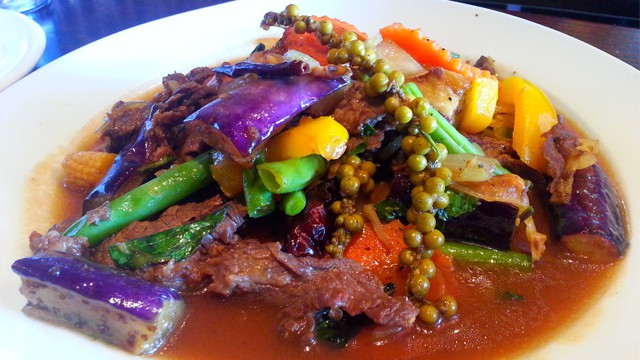