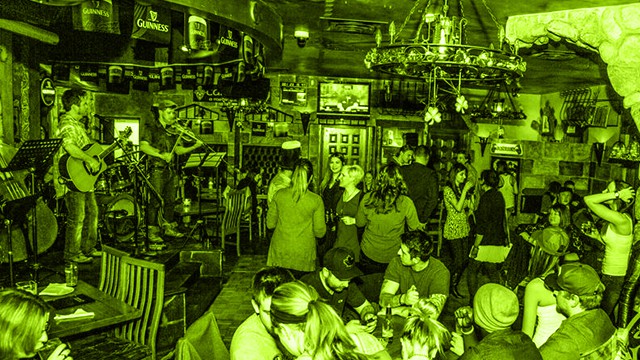 St. Patrick’s Day is here, and we know that it’s not just the Irish who get geared up for this fun celebration. For those who aren’t aware, St. Patrick’s Day was originally celebrated in honor of – you guessed it – Saint Patrick, the foremost patron saint of Ireland. March 17 is the date traditionally known as his death day, but the date became a Christian Feast Day in the early 17th century, since he was the missionary who converted many of Ireland’s inhabitants to Christianity.

Now, thanks to the luck of the Irish, we Mississaugans celebrate the day as well, decked out in green gear and probably ingesting pints and pints of Guinness. But where in the world (or, on a smaller scale, in Mississauga) should you go to celebrate St. Paddy’s? Here are some of the best parties in the city.

As you walk into the Brogue, you realize it’s bigger than it looks from the outside. This Irish pub has been a mainstay in Port Credit for 15 years and by look of how busy it gets, it’s here to stay. As you look around the Brogue, you can’t help but notice how diverse the crowd is. It’s popular among people of all ages. To celebrate St. Paddy’s Day, they have live music starting at 12:00 p.m. and Irish dancers will also be performing. Brian MacIntyre and the Rogue Brogues will be performing from 12:00 p.m. to 4:00 p.m. The Toronto Kitchen Party will kick off at 5:00 p.m. and run until close.

Where better to spend St. Patrick’s Day than at a traditional Irish pub? Nowhere, that is! Luckily, Cooper’s Pub has multiple days scheduled for the green festivities – March 15, 16 and 17. If you head over to Coopers on St. Paddy’s Day, you can enjoy live music, Irish dancers, green beer, traditional Irish food, prizes and more. If you go to Coopers on March 15 or 16, you can indulge in Guinness family beer specials and a Jameson Irish whiskey special.

If you’re from Streetsville, you’re not going to want to miss the St. Paddy’s party at Cuchulainn’s. With long lineups each year, the pub heats up its outdoor tent to make sure there’s plenty of room to celebrate. The party begins on Friday with a live performance from Matt Zaddy (Zaddy the Paddy Trio).  On March 16 and 17, attendees can check out performances by Heather and Zaddy, Irish dancers, Zaddy the Paddy Trio and Partland and Sil.

This time last year, this brand new pub was the long-standing Belfast Lounge. Now, it is the Green Goose Pub–a newly opened restaurant that says it honours the Irish experience while infusing it with a little taste of Canadiana. As far as food goes, the new restaurant offers some of the classic European fare you’d expect from a bonafide pub, including fish and chips, traditional Irish stew, chicken pot pie, steak pie, chicken curry, poutine (regular, pulled pork and buffalo chicken), chicken wings, chicken fingers, bangers and mash and more. While there aren’t too many details, the resto’s Facebook page is asking residents to join them on St. Paddy’s day.

Isn’t it true that beer tastes better when it’s green? You can get your green pint at Failte, as well as the true Irish treatment. Since St. Patty’s falls on a weekend, Failte is doing it up from March 15-17 and is offering free airbrushing tattoos, hats or t-shirts, music by the Christian James Band, Irish dancers, Guinness glass engraving and more. The Kitchen Party will also appear as the venue’s special guests on March 17.