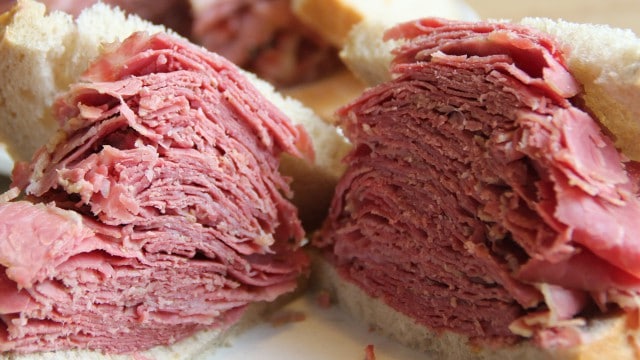 In this neck of the woods, the smoked meat sandwich that’s king is Montreal smoked meat and there are some great places in Mississauga to get one.

The smoking process is a tedious one that begins by salting and curing beef brisket with spices. Spices may vary, so each smoked meat sandwich will be a little different. The brisket absorbs all the flavours over a week and then it’s hot smoked, cooked through and steamed.  Even after all this, your deli has to slice it so you can enjoy perfect ribbons of meat in your sandwich.

There is no meat that sits better in between rye bread than smoked meat.

Here are the top 5 places for a smoked meat sandwich:

Located in what I thought was Brampton on Torbram is a deli called Switzer’s Airport Deli. I was kind of glad this piece of history had a Mississauga address. They definitely don’t build them like this anymore. Just look at the picture below. An employee told me that Switzer’s started off on Spadina Ave. in Toronto in the 40’s and existed before Chinatown. They have been in Mississauga for the past 30 years at this location serving delicious sandwiches, soups, salads, fresh fruit, cookies and pastries. Jessie’s is a legendary spot that only locals really know about, despite the fact that it’s been around since 1981. It’s located in an industrial plaza at Kennedy and Matheson and it boasts huge lunchtime lineups — and for good reason. The food is legendary and the owner is a personable guy with a distinctly unique sense of humor that you have to be ready for. The smoked meat chunk was taken out of the steamer and put in a deli slicer before being placed on rye and smothered with mustard.  The meat was hot and juicy and absolutely delicious. And if a sandwich isn’t enough for you, you can upgrade to a smoked meat sub! Jody’s Deli is a family run business named after the founder, Jody Kerimovski who is also the creator of the signature blends used in the meats. The meats are prepared by a boutique butcher located in Montreal using Jody’s signature recipes and brought in weekly. You can find a variety of classic deli sandwiches including smoked meat (pepper crusted and smoked for 16 hours), corned beef (slow cooked in a mild spice brine), slow roasted beef, smoked turkey (white breast meat smoked for 8 hours) and a variety of daily house-made sides.  It’s a modern take on an old school deli concept built on years of experience in the Montreal food scene. Entering the Montreal Deli & Greek Grill (also simply known as MD and located on Dundas east) is like walking into a time warp to the 80s. The decor is a mishmash of random items — just like the randomness of finding this place. There are ceiling fans, Chinese lanterns, a Brazilian coffee display, dried flowers and footballs in their original packaging at the bar. When in a local Montreal Deli, do as the locals do and order the SUPER Smoked Meat Sandwich ($11.95). Both my orders came with fries, coleslaw and a dill pickle and were packed with moist, delicious meat.  It appears that they are doing something right if they are still around serving loyal customers 30 years after their doors first opened.