The buzz surrounding Mississauga these days is focused specifically on transit. Whether it’s the Hurontario LRT, the proposed Union Station West regional hub at Pearson Airport, Dundas Connects or GO Regional Express Rail, it seems to be always about public transit.

But there’s another form of transportation that gets a overlooked sometimes in Mississauga: cycling. Increasing cycling infrastructure, particularly the use of bike lanes, has not gone unnoticed beyond the borders of Canada’s sixth largest city. NOW Toronto magazine, a publication very much geared towards the bohemian downtown Toronto types, remarked recently that Mississauga understood that cycling infrastructure was crucial to building a great city as opposed to Toronto itself. CBC also profiled self described “suburbs” such as Mississauga and Scarborough as great incubators for cycling amongst residents.

Ward 3 Councillor Chris Fonseca, who sits on the Mississauga Cycling Advisory Committee, says Mississauga is in a very different situation than Toronto because it doesn’t yet have the same density and a lot of the road network was built specifically for cars. Fonseca also says it’s crucial to look at all planning projects through a cycling lens when redesigning or redeveloping any road.

“Those interested but concerned riders want to ride more,” Fonseca said, citing surveys the city conducted on cycling. “We’ve heard from over 2,000 of them that they would like to ride more; however, they don’t feel necessarily safe enough on some of that infrastructure.” That’s why segregated bike lanes should be a major consideration when it comes to installing more cycling infrastructure in Mississauga.

You can see the proposed cycling routes in the Mississauga Cycling Master Plan here, but let’s take a look at some major roads in Mississauga to see if they are viable enough for segregated bike lanes.

These suggestions are based on their current capacity, such as are they wide enough to accommodate different modes of transportation other than private passenger vehicles and MiWay buses. Also, just because they are listed doesn’t mean all of them have to have segregated bike lanes; at some portions perhaps it would be more prudent to do the standard bike lane with a painted stripe because there isn’t the space along that particular juncture.

Here are five major roads in Mississauga that I think would be good candidates to have segregated bike lanes:

Although this may be already one of the planned routes for segregated bike lanes as outlined by Fonseca in the Cycling Master Plan, it is worth repeating as Burnhamthorpe is a major arterial road within Mississauga. You can see from the map of this section of Burnhamthorpe that there is a lot of space that could be converted into segregated bike lanes. With the LRT going around this street in a loop around Square One, during construction why wouldn’t they consider putting in bike lanes as well.

As you move east along Burnhamthorpe from the intersection with Hurontario, you can see it’s one of the widest streets in Mississauga you’ve ever come across, thanks to recent construction that had been done along the route over the past several years. This portion of Burnhamthorpe, with the usage diversified in the proper manner, could enhance the transportation options for those not driving eastbound into Toronto.

The main focus of all that LRT construction slated to begin in 2018, Hurontario will see the most changes in the upcoming four years as the street is altered to accommodate LRT by removing one lane of traffic. All the various plans have depicted Hurontario becoming more of a diversified street in terms of transportation modes, so it is a no brainer that bike lanes have been put into consideration.

The Dundas Connects study recently launched by the City of Mississauga provides for bike lanes as well as other modes of transit. You can see in the image below that there is already plans to install raised cycle tracks along Dundas Street adjacent to the standard vehicle lane, revitalized sidewalks, and a Bus Rapid Transit (BRT) route. 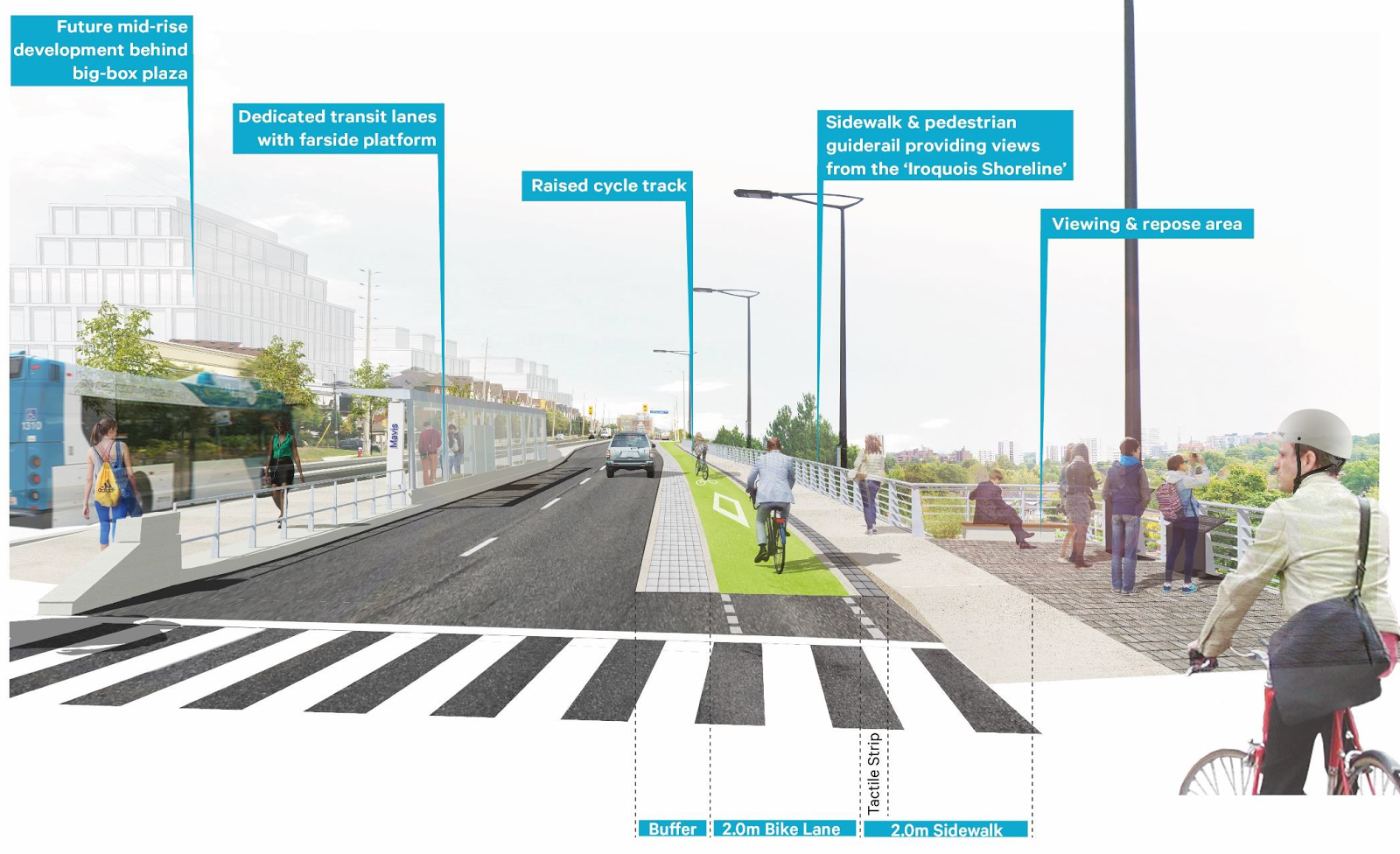 Dundas has been described as a ‘super street’ and if you have tried driving on Dundas from one end of Mississauga to the other, then you can understand why it fits that moniker. No doubt that planners and cycling advocates would love to see bike lanes included in the mix of transit modes along Dundas Street.

Just as with Dundas Connects, there is another Mississauga led project in the works known as Lakeshore Connecting Communities. But even if there was no strategic plan, Lakeshore would have been a prime candidate for segregated bike lanes, at least in portions of the street that had the space (see above map). Port Credit and Clarkson are vibrant areas along southern Mississauga that have their own local flavour and buzz with activity. It would be great if people could safely get from one point to the other in a dedicated bike lane alongside standard vehicles like cars and buses.

Long stretches of Eglinton Avenue, particularly from Creditview to Hurontario Street, has enough space on either side to house a segregated bike lane. Eglinton is also quite wide east of Highway 403 where it is a predominantly industrial / employment area, and there is a planned transit hub at the end of Eglinton bordering Toronto. If the idea to get more people to adopt cycling as a viable commuting option, then planners should seriously look to installing segregated bike lanes along Eglinton Avenue.

Where would you like to see segregated bike lanes in Mississauga?