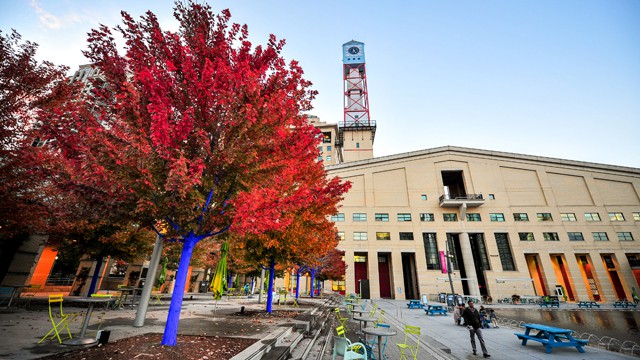 Have you ever wondered about the city’s most prolific public art projects? While not everyone associates suburban cities with art, Mississauga has done a lot–and plans to do a lot more–to enhance the city’s art scene.

That said, there are already a ton of captivating, top-quality works and structures all over the city that showcase local talent, pay homage to our culture and heritage and give the landscape a little extra vibrancy.

As outlined in the city’s first ever Public Art Master Plan, Mississauga is committed to supporting and investing in the arts community. Established and formally approved by city council in 2010, the Public Art Program aims to characterize Mississauga as a vibrant and creative community where people want to live, work and play. According to the city, Mississauga’s Public Art Program demonstrates the city’s economic and cultural relevance in attracting the development industry, the arts sector, as well as new residents and visitors.

Public art has the ability to boost local industry and tourism and can lead to a sense of ownership and pride within the community. A variety of permanent and temporary public art installations enhance the quality of life for Mississauga’s residents and create memorable experiences for visitors.

Here is a glimpse of what is contained in the Public Art Collection:

5) The Blue Trees by Konstantin Dimopoulos

The project was led by the City’s Culture Division with tremendous support from Parks and Forestry as well as Environment, and engaged a variety of community partners along the way. The Blue Trees was funded through the City of Mississauga Public Art Program, with matching financial support from private sector partners; La Maison Simons and Square One, Oxford Properties Group. Community collaborators included the Living Arts Centre and Sheridan College.

This past September the Artist engaged the community in the colouring process and using an environmentally friendly, electric-blue pigment, living trees were transformed throughout downtown Mississauga to form a surreal landscape. This temporary public art installation makes trees visible in urban spaces and raises social consciousness about the role of trees as the lungs of the world. Once the trees are back in bloom this spring, the City’s Culture Division will be launching an Instagram contest for photo submissions of The Blue Trees. The winner and two runners-up will each receive a beautiful limited edition print signed by the Artist. Contest details will be posted on the Culture Division website this spring. For a third year in a row, a public art competition was held and asked the arts community to create a unique design for the pyramidal oak trees which line the center of Hurontario Street and Burnhamthorpe Rd W. Artists Amy Mailloux and Tony Di Nardo were selected by a jury and their artwork entitled CANcolours150 celebrates Canada’s sesquicentennial anniversary and will remain in place until the spring. This temporary public art installation celebrates the diversity of cultures and ethnicities that unites us all as a nation.

Our national diversity is emphasized through an abstract visual representation of world flags with a bold red and white colour signifying Canada at its core. Thirty-two oak trees along Hurontario Street have been wrapped using 57,000 strips of recycled plastic fabric. Each strip of fabric represents the millions of people that make Canada beautiful. Standing tall and at the centre of the artwork is the Unity Tree; intertwining and merging all the world’s flag colours in one. 3) The Book by Ilan Sandler

The Book is a large-scale painted steel sculpture with two pages torn away from its spine. The spine is perpendicular to the ground, the covers are open, and the pages appear to blow in the wind animating the space between the Central Library and the Civic Centre at Mississauga Celebration Square. The pages are patterned with clusters of words and symbols referencing the origins of writing and the human body. Building Colour is a multi-media sculptural intervention at seven (7) of Mississauga’s Transitway Stations. The artwork uses a combination of sculptural components made of cast and fabricated bronze, architectural glass, colour changing LED lighting and touch-sensitive triggers to engage the audience. The artwork stages the tools and equipment of glass installation, simulating a work site which is momentarily unoccupied by its workers. The public is to envision witnessing a change taking place as the predominantly clear glass of the stations is being replaced with coloured glass.

Throughout the stations various components are scattered, for example; special tools of the construction trade and the personal objects of the workers are scattered on windowsills and light emanating from storage rooms reveals an available supply of coloured glass. In close proximity to the storage rooms bronze-cast tools and supplies are touch-sensitive such that the audience can influence the colour and pattern of light triggered and the perceived colour for the glass to come.

Building Colour intends to blur the boundaries between conventional ideas of sculpture and the contemporary experience of urban living. It intends to elevate a few utilitarian, every day and often unnoticed fragments of the building process and reveal moments of beauty, playfulness and curiosity.

Explore the Mississauga Transitway and go on a treasure hunt to find that artwork that is currently installed at the following stations: Central Parkway, Tomken, Dixie, Tahoe and Etobicoke Creek. The last remaining phase of the project will be installed at Spectrum and Orbitor stations this spring.

Photo, taken at Etobicoke Creek, courtesy of the City of Mississauga 1) The Messenger Project by Ernest Daetwyler

This two-part sculpture engages residents, commuters and the local community on a playful and spiritual level. The artwork is made of hand-carved Indiana limestone and bronze and is situated within the pedestrian plaza located at Erindale GO Station. A smaller secondary piece is located within the centre median along Burnhamthorpe Rd W, directly across from the GO station. The project was jointly funded by the City’s Public Art Program and Metrolinx.

The Messenger Project draws its inspiration from Mississauga’s rich heritage and reflects on a voyage of both past and present. An eagle sits at the top of the large sculpture; modeled in wax and cast in bronze it is a symbol of the Mississaugas of the New Credit First Nation, who were great messengers, often travelling hundreds of kilometres on foot to deliver messages.

The historic trunks and luggage objects visible at both locations were carefully documented and researched by the Artist with the generous assistance from the Museums of Mississauga. The child cradle board and the spiritual medicine bag cast in bronze were generously contributed by the Mississaugas of the New Credit First Nation. The City of Mississauga Public Art Program is working on a number of Canada 150 projects which will be unveiled later this month. Stay tuned!

For more information about the City of Mississauga Public Art Program visit: