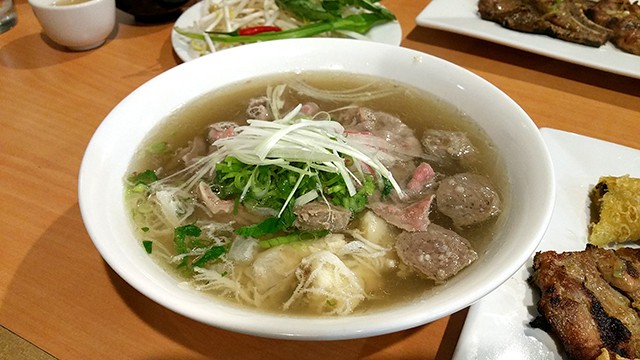 From the day I first travelled Vietnam in search of exotic spices and silk, I have been in love with pho in Brampton. For me and many like me, pho is a new kind of comfort food, slowly taking the place of poutine and whatever the hell else we call comfort food in Canada.

Without further delay, here are the top five pho joints in Brampton.

Located in a new plaza behind the superstore just off Steeles and Hurontario, this is one of the big boy chains in the pho game in the GTA. They have been at this location for about five years and have been stepping up their pho game every year and giving the old dawgs a run for their money. Great service, a clean restaurant and an ever evolving pho game means I see these guys moving up in the rankings in the very near future.

Located in the plaza beside my local Freshco, I make an excuse every time I go shopping to get myself a large rare beef and beef ball pho with some spring rolls and a milkshake. The pho here tastes like a 70 year old Vietnamese grandmother has been slaving over it for hours, but it comes out fast and furious like Vin Diesel. The pho here is cheaper than a grease burger from Burger King, so give this place a shot when you need a quick bite.

This is a mainstay on Kennedy Road and is located in a strip plaza in very close proximity to BBQ god RD BBQ. This place has been around for years and has a loyal following. The pho here is great and the décor, while let’s say is on the “Biblical” side of things, has a kind of charm that you can’t help but feel at home in. A regular spot for highschool kids, business people and apartment dwellers alike, this spot will never disappoint.

Located in Downtown Brampton across from city hall, the weekday lunch rush here is legit and the repeat patronage speaks for itself. The staff here is very accommodating and the broth is some of the best I have ever had. While the décor may need a bit of an update, I don’t have pho for the atmosphere. Give me a big bowl of delicious broth, a TV playing CP24 and friendly staff and I am yours.

This place is king of the pho game. I am so impressed by the pho at this place that I would put Pho Dau Bo up against any Pho joint in the GTA. No doubt! This is a pho restaurant that does pho right to the point that I am more adventurous when I get my pho here. While I often go for the regular rare beef with beef balls, sometimes I go into pho-maniac mode and get my pho with tripe as well. I am a legit savage when it comes to pho, and we are damn lucky to have such an establishment in Btown!