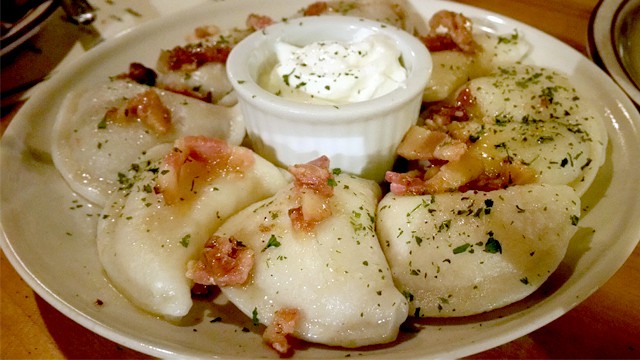 I’ll be honest; finding pierogis, pirogi or perogies (however you spell it) in Mississauga was harder than anticipated. Despite the city’s vast Polish population, not many places have these delicious dumplings of Eastern European origin. This perfect comfort food typically boasts a savory (or sometimes sweet) filling that’s wrapped in a pocket of dough and served boiled or fried.

Done right, pierogis can work as a satisfying and delicious meal. With some sautéed onions and sour cream, you won’t be able to stop eating them!

Here are the top five places to eat pierogis in Mississauga:

The Wingery is the only place you can get pierogis on the go with your chicken wings. The chicken wing takeout and delivery joint with two Mississauga locations. One is on Kennedy (just north of Eglinton) and the other is at Southdown and Lakeshore. Their slogan is “Size Matters” and when it comes to chicken wings, I absolutely agree. Not only do they have wings, they also have sandwiches, delicious deep-fried pierogis, poutine, mac and cheese bites, fried pickles and chicken fingers. If you haven’t been here in a while, you are in for a treat. Back in 2013, this old school British pub underwent a complete makeover and now boasts a sleeker, more stylish aesthetic and the food is damn good! The pierogis are no different, as they are boiled and stuffed with potato and cheddar and tossed with sautéed onions and crisp bacon. They also come with a side of sour cream. Get the pierogis with all three toppings and you will be in heaven! Just look at the picture! How do I describe this place? At first glance, it looks like a tiny, tucked-away bar. When you walk in, however, you feel like you’ve stepped into a legit barn. There are deer heads on the wall and saddles all over the place. Oh, and this place — called The Old Stable Pub — is a straight-up Polish restaurant.

The menu is small and filled with polish dishes including, of course, pierogis. The server said everything is made in-house and once he brought the pierogis, I believed him. They come in potato and meat varieties, so they’re good for vegetarian and carnivorous diners alike. Try this place is you want to see a truly different restaurant! It’s awesome! Located by Burnhamthorpe and Dixie is a go-to place for the Polish community called Arkady Bistro Cafe. It’s a hot plate restaurant that can seat about 60 people. I’d been there before, but never had pierogis until today. I found out that they only have pierogis on Fridays, so let that be a warning. They have a $9 pierogi special that comes with nine pierogis and a salad. Let me tell you that these babies are delicious! The best pierogis in Mississauga are located in the toughest plaza to get into — the one on the corner of Dundas and Dixie, behind the gas station. When you walk in, you’ll see a big screen TV with Polish News playing. You’ll also hear people passionately debating said politics in the cozy booths. Or, at least that’s what I think they were doing. I had never seen so many pierogis in my life. They have a ton of delicious dumplings at the ready, beckoning you from behind a glass case. All the pierogis are made in-house and they come in three incredible flavours: cabbage, mushroom and meat & potatoes. This is the go-to place if you want large batches of pierogis (or 50 just for yourself).