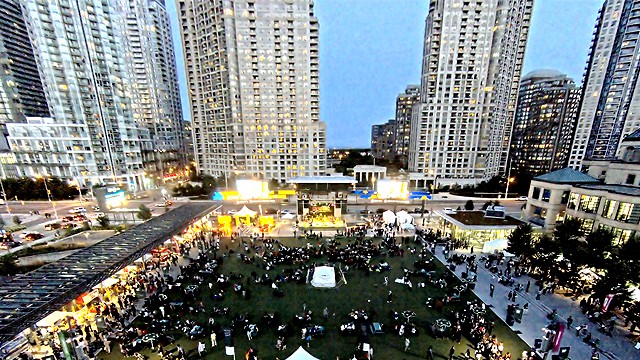 Every year, people promise themselves they’ll turn over a new leaf at the beginning of the next calendar year. They say they’ll be thinner, wealthier and and more motivated. Sometimes they just promise to be a little more patient and kind.

Regardless of the nature of the resolutions we make, most of us kinda/sorta make one and since we’re promising to be better versions of ourselves, it only makes sense for cities to do the same.

So, here are five New Year’s resolutions that the city of Mississauga might want to consider for 2017.

5) Continue to Plan for the LRT

Mississauga’s incoming Hurontario LRT is exciting, but a report by Move the GTHA found that municipalities might not have adequate funding (or funding plans) set aside for things like routine maintenance. According to Move the GTHA, Ontario is facing a $28.8 billion capital funding gap for its proposed Big Move transportation plan. Now, it’s important to note that the report does not specifically call out Mississauga projects because it doesn’t provide a city-by-city breakdown of the transit gap. That said, Mississauga is set to be home to some pretty sizeable Big Move projects, including the Hurontario LRT, the Transitway, two-way all-day GO service and rapid transit on Dundas, and that means that it’ll have to get its monetary ducks in a row when it comes to fully implementing and maintaining these necessary but costly projects. While the city has been proactive, it might have to have a difficult discussion about raising funds–perhaps by raising taxes–in 2017.

Recently, former mayor Hazel McCallion criticized the province’s ambitious intensification plans (making cities more urban, essentially) and asked it to slow down. Her advice somewhat contradicts current mayor Bonnie Crombie’s push to intensify the city and encourage more developments and transit projects. In layman’s terms, Crombie believes Mississauga can—and should—become the big city it’s seemingly meant to be. While some people worry about new condos and the rapid changes the former bedroom community is undergoing, it’s encouraging to see Crombie and council embrace a modern (and ambitious) vision for the city. The city should keep doing what it’s doing.

Technically, City Centre is Mississauga’s downtown—but is that truly our “downtown” in terms of entertainment and walkability? Official definitions aside, the term “downtown” conjures up images of street parking (ample street parking, not a smattering of spots here and there), independent shops and restaurants and walkability. While it’s not necessarily easy to make your way from one end of a big city’s hub to the other on foot, the idea shouldn’t seem preposterous. While City Centre has a lot to offer (Square One, condos, Whole Foods, the LCBO, etc.), it’s not as downtown-y as, say, Streetsville or Port Credit. Other Toronto satellite cities such as Brampton and Oakville have bona fide and distinct downtown cores that are a truly different beast from the rest of the neighbourhoods.

According to the city’s Downtown 21 Master Plan document (which you can view for yourselves here), the McLaughlin Group came up with a vision for the Square One area that involved elevated walkways and scenic green spaces. They imagined, I think, an urbanesque mini-city in the center of the yet-to-sprawl suburb. A place for cars and people — not just people in cars. Obviously, their vision never quite materialized and, over 40 years later, people are wondering how to resurrect the dream and actually turn the City Centre into a legitimate urban space. The Downtown 21 plan is a good start, but there hasn’t been much talk of an official starting date (although the project was mentioned at the recent budget event, so it hasn’t been forgotten).

The fact that it was recently mentioned is encouraging. Let’s hope we hear more news on it in 2017.

2) Do All it Can to Ensure New Developments are Vibrant

Mississauga residents heard some pretty exciting news this year. The city’s (and Jim Tovey’s) ambitious Inspiration Lakeview project is taking shape and the city recently announced that the Imperial Oil lands have been sold, making development for Inspiration Port Credit more imminent than ever before. Residents also learned that Rogers is going to create a pretty swanky new condo community in City Centre in the form of M City.

At the M City press conference in September, representatives from the city and development and design firms promised thriving communities full of walkable areas and unique food service and retail operations. This is probably the most important promise to keep, especially in a city that already boasts several condo communities that, unfortunately, only tend to offer residents a small smattering of useful retail stores.

If you look at Pinnacle Grand Park or the cluster of condos in City Centre, you’ll see communities built around car-reliant roadways and an endless array of medical clinics. Sure, there are some banks and cafes and restos, but there also a ton of generic convenience stores, ho-hum takeout joints and dozens upon dozens of walk-in clinics (how sick are people in Mississauga that every single condo somehow needs one or more clinics?). Clinics and takeout places are useful (and some buildings should absolutely offer them), but they’re not vibrant.

They’re not chic or unique or urbane. Here’s hoping that, as M City and other developments move forward, developers, residents and city officials really push for unique and exciting retail and dining options.

1) More (or a Signature) Festivals

Mississauga actually has a ton in the way of festivals and that’s nothing to criticize. As of now, the city does its best to celebrate monumental occasions such as Christmas, New Year’s, Canada Day and a host of other cultural and seasonal events. In 2016, it welcomed its first ever Japan Festival Canada (originally, it was called Japan Day Mississauga) and the Junk Food Festival. Residents also got to check out a Christmas market in Celebration Square for the first time ever.

The new festivals are great. They augment what the city already offers and they make Mississauga something of a destination worth traveling to.

So, when it comes to festivals, the city should maintain its ambitions. It should remain open to more (and bigger) festivals that celebrate food, culture and, above all else, community and fun. It would also be great to see the city and residents come together to, one day, create a signature festival (something like Taste of the Danforth or The Beaches Jazz Festival) that people travel from all over the GTA to experience.