Top 5 Most Historical Buildings in Mississauga 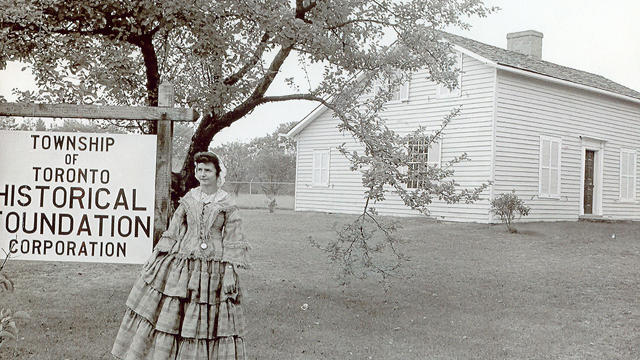 Believe it or not, the city is home to some fine (and maybe even haunted!) old buildings that now function as restaurants and museums. Despite the passage of the years (some are well over a century old and have actually been moved from one location to another), these buildings are still as majestic now as they were in their heydey.

Here’s a look at some incredible photos and engaging information about five historical buildings in Mississauga.

The Cherry Hill House is one of the oldest surviving buildings in Mississauga, built between 1817 and 1822, having been moved from the northwest intersection of Cawthra Road and Dundas Road East. The two-storey Georgian structure with its large Regency-styled veranda was originally situated on a small hill overlooking Joseph and Jane Silverthorn’s 200-acre farm. The laneway to the house was lined with cherry trees, transplanted from New Jersey when the Silverthorn’s settled here in 1807. The Silverthorns had three sons and nine daughters. Joseph and Jane died within months of each other in 1879 and 1880, after 75 years of marriage, and the house was inherited by their three unmarried daughters, Janet, Helen and Augusta. Augusta died in 1907 and left the house and its contents to her favourite great-nephew, William Stanislaus Romain. The house fell into disrepair, and served for a time as a boarding house. While still on what was once part of the Silverthorn farm, the house was moved to its present location in 1973 to make way for the widening of Cawthra Road. In 1979, the Cherry Hill House opened to the public as a restaurant and pub. John Barnhart’s “Montreal House” is the oldest surviving structure in Streetsville and the oldest commercial building in Mississauga. Originally built in 1821, it was home to Barnhart’s trading post and general store. Barnhart’s son, Jabez, started a newspaper upstairs in 1843, which became the Streetsville Review when Solomon J. Barnhart, Jabez’s brother, took over publication in 1846. The first telephone exchange in Streetsville operated in the southern extension of this building. Little altered, the building continues to serve commercial purposes today. The Grange, also known at the Robinson-Adamson House after its first and last private owners, was built around 1828 for Sir John Beverley Robinson, the first Chief Justice of Upper Canada. It is believed that the house served as a summer retreat, hunting lodge, and early administrative office for Robinson, who had been appointed Executor of Indian Land Sales in Toronto Township. Over the years the house has served as a family residence for Colonel William Thompson, Doctor Beaumont Dixie, Weymouth Schreiber and Harry Adamson, amongst many others. The building was donated to the City of Mississauga in 1978, and today is home to Heritage Mississauga. Bradley House is believed to be the only surviving residence of the original families of Merigold’s Point (Clarkson). Lewis Bradley, a United Empire Loyalist, received a Crown land grant in 1810 and constructed a log cabin. He and his wife Elizabeth (nee Merigold) constructed this one-and-a-half storey saltbox-style farmhouse about 1830. The house has been restored and furnished to reflect daily life in that era, and has been open as a public museum since 1967. Although moved from its original location close to the lake, the building still stands on part of the original 200 acre Bradley farm. The Bradley House museum is part of the Museums of Mississauga.